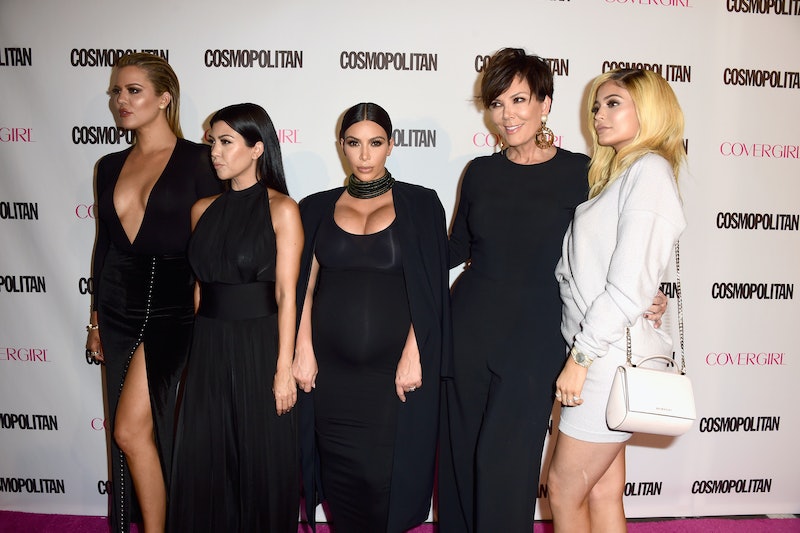 Throughout the month-long marathon, eagle-eyed viewers and Snapchat users will unlock "new surprises every day," including "filters, videos, and more." If you can't wait until Monday to get your Kardashian-West-Disick-Jenner filter on, the Snapcode is right here. (Quick reminder: If you're reading this at work, that link will only work on your phone.)

Now take a deep breath, because the long list of series set to air during the Kardash-a-thon includes the following: 13 seasons of Keeping Up With The Kardashians, spin-off series Kourtney & Khloe Take Miami, Kourtney & Kim Take New York (otherwise known as The Series That Aired After Kim Got Divorced), Kourtney & Kim Take Miami, Khloe & Lamar, and Kourtney & Khloe Take The Hamptons. One week after that, the Season 14 premiere of Keeping Up With The Kardashians will happen. Got all of that straight? Good. Because if they announce a Season 2 of Life of Kylie at any point in the next month, fans probably won't survive September.

The marathon kicks off this Monday and runs through September 24, pausing at noon daily to accommodate the Daily Pop news hour. That should give viewers plenty of time to break for lunch and test the new Snapchat filters. What could a Kardashian-centric filter be? Can I test out Kim's big 2007 hair, or Khloe's Juicy tracksuits? Can I try on Rob's first tattoos? What about Kendall's braces? Can we put ourselves in this iconic scene? Just throwing it out there.

Jokes aside, this modern family has experienced ten lifetimes' worth of major milestones since the show's premiere. We've watched the three Kardashian daughters grow up, have kids, get married, and get divorced. Kendall and Kylie Jenner went from surly preteens to household names when they were both still teenagers. Kris Jenner created an empire. Caitlyn transitioned into an activist and icon. As a family, they've experienced growing pains, but they've also redefined what it means to be a celebrity.

If you didn't keep up with the Kardashians, and you're worried about what you may have missed, this is the ultimate opportunity. Grab your giant salads, iced teas, and a gallon-sized Mason jar of cookies and get ready to relive the decade in Kris Jenner's children's lives. Football players will be dated; Diamond earrings will be lost; Kourtney will morph into a mug of room temp dandelion tea right in front of our eyes. You're doing amazing, sweetie.