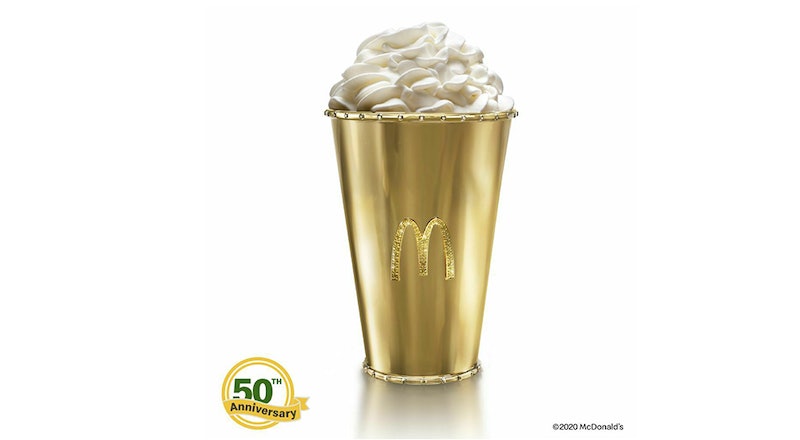 If you’re looking for the most extravagant way to enjoy a Shamrock Shake, your journey ends here. In honor of the minty green shake’s 50th anniversary, McDonald’s made an 18k Gold Shamrock Shake Cup, and now it’s up for auction on eBay. It’s class meets casual dining! It’s opulence on a budget! It is a literal gold cup for a Shamrock Shake, treating the delicious dessert exactly how it should be treated.

Though “18k Gold Shamrock Shake Cup” sounds like a jumble of words I made up right now, it is indeed a one-of-a-kind thing that exists. And it’s not just made of 18k Gold. The hand-crafted cup is also encrusted with hundreds of emeralds, white diamonds, and yellow diamonds. It’s valued at $90,000, which costs more than a brand new Lexus SUV. But does your Lexus have emeralds, diamonds, and exactly enough space for one (1) Shamrock Shake?

The Golden Shamrock Shake eBay auction began Tuesday, Feb. 25 with a starting bid of $1. At the time of publication, just two days after the auction opened, the highest bid sits at $32,100.00 That’s nearly the cost of out-of-state tuition for one year at a California state university. Buuut does your college diploma taste like the color green?

As you may have expected, the golden cup was developed exclusively for 50th anniversary of the Shamrock Shake. “Tradition calls for a 50th anniversary to be celebrated with gold, so we wanted to create an item that not only represented this milestone, but our delicious Shamrock Shake,” said McDonald’s Vice President of U.S. Communications Dave Tovar. “We invite all our fans to join us in this celebration as we cheers to 50 delicious years with the Golden Shamrock Shake and help raise funds for RMHC and its incredible cause.”

All proceeds from the winning bid will benefit Ronald McDonald House Charities, which helps provide nearby housing and support to families with children in the hospital.

If you want to buy a Golden Shamrock Shake Cup that’s valued at the average yearly salary of a nurse practitioner, you have until Friday, Mar. 6 at 5:00 a.m. eastern time to place your bid. Good luck!