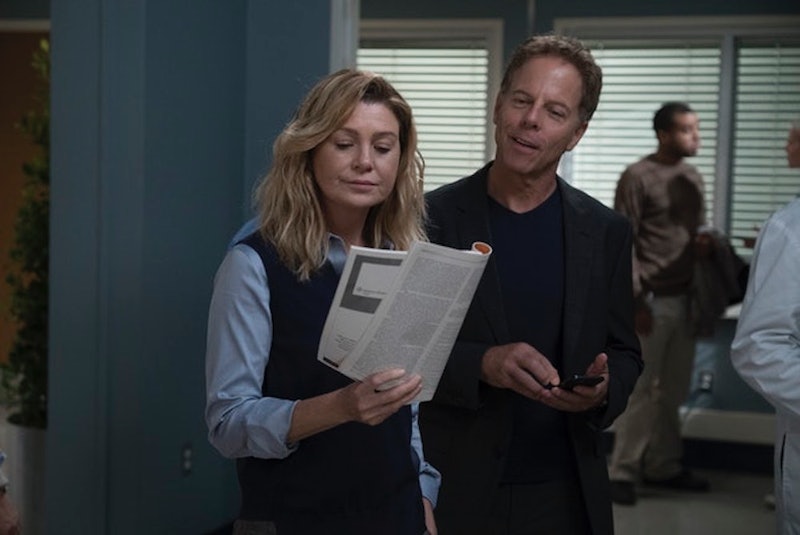 As interesting as some of the medical cases on Grey's Anatomy can be, if we're being honest with ourselves, the main reason we tune in every Thursday isn't for the surgeries — it's for the surgeons performing them. This is especially true when it comes to the show's main star, Meredith Grey, so when it was revealed that she'd be getting a new love interest in Season 15, fans immediately became invested. Who will Meredith's new love interest be on Grey's Anatomy and how can it possibly hold a candle to the epic love she had with Derek Shepherd?

Thanks to a recent interview TVLine had with showrunner Krista Vernoff, we now have a little more insight into one of the questions and can say with absolute certainty that a Meredith and Koracick romance is never going to happen. So if you were a fan of this duo, it's perhaps time to allow this particular ship to sink. "In my mind, Koracick was never in the running for Meredith," Vernoff told TVLine. And as far as the budding chemistry between actors Ellen Pompeo and Greg Germann, it was neither planned nor intentional.

"They really love working together; maybe you’re [picking up] on that,” Vernoff stated. “Greg is such a delightful actor, and they have such a blast working together ... But [the chemistry] wasn’t scripted or intentional.”

Of course, this revelation shouldn't come as a total surprise to anyone at this point. Last week Vernoff told TVLine in a separate interview that Meredith's next great love with either be Link or DeLuca. “Her dating adventure has boiled down to [that] triangle,” Vernoff confessed, though refused to give away much more than that. It's anyone's guess at this point who will ultimately win over Meredith's heart, but you can pretty much guarantee that Koracick will play no part in any of it. And when you stop and think about it, that's actually a good thing.

While it would be understandable if Koracick became interested in Meredith — she's a smart, incredibly successful surgeon, after all — that doesn't necessarily mean that a romance would ensue from it or that she would be interested in any way. Relationships may run amuck at Grey Sloan Memorial Hospital, but that doesn't mean that every man Meredith works with needs to have romance potential. It is possible for men and women to work together without having it develop into dating, despite popular belief. Both Meredith and Koracick respect one another as surgeons — perhaps through all their time working together they even became friends — but as far as Mer's love life is concerned, there's no need for him to be included in that part of her story. And as far as the chemistry they had together, that's simply a credit to how well Pompeo and Germann get along together.

There are a lot of budding relationships on Grey's Anatomy that ultimately come to fruition (especially if there's an elevator around), but this is one of the few instances where this will prove not to be the case. Meredith and Koracick simply aren't meant to be, which seems to be the best thing for all parties involved — at least for right now.