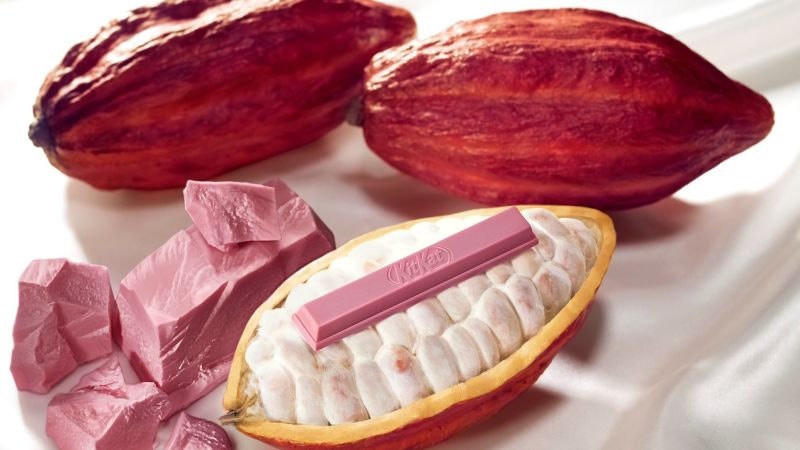 Millennial pink is a color that has been on trend for awhile (I mean, it's not a crayon yet for God's sake so it has a decent shelf life, right). There are so many millennial pink things to feast your eyes on, from mugs to candles to chairs to water bottles, that it was only a matter of time before food joined the craze.

This time, it's Kit Kat joining in on the madness, with a whole new flavor of chocolate beyond the color. Nestle, its parent company, is releasing the gourmet new millennial pink Kit Kats on Jan. 19 in Japan and South Korea.

It's not going to be available commercially in the U.S., but all hope is not lost, because you can buy them online starting in early February — thank God for international delivery, right! Now you don't have an excuse to be even more extra this Valentine's Day...

A bit of context behind what makes this pink chocolate so unique: Swiss cocoa producer, Barry Callebaut, came up with fourth kind (alien, indeed, get it?) of chocolate in September. In addition to milk, dark, and white chocolate, this new kind is "ruby," and has been colloquially dubbed "millennial pink chocolate" by the internet because its hue comes naturally from ruby cocoa beans. The official website describes it as an “intense sensorial delight,” and the flavor has been described as "mildly sweet" and tasting vaguely of berries, although not a particular discernible one.

Word on the street is ruby chocolate has been in development for a decade. While it's been available to purchase since 2017, this Friday will be the first opportunity to try it as a Kit Kat for people who live in Japan and South Korea, where it will make its debut.

Sublime Ruby is the work of the Japanese pastry chef Yasumasa Takagi, who has developed a ton of weird Kit Kat flavors in the past. You can thank him for some of the favorites, such as green tea in 2004, and... wasabi and purple sweet potato?

But that's far from the end of the Kit Kat rainbow when it comes to bizarre flavors, as any true follower of Kit Kat knows. For instance, there's pumpkin pie ones for all of your fall-related needs — and cake-stuffed ones, for your all year-related ones:

And even gold ones?!

I think I'm going to stick to this regular kind, right?

Japan is doing pretty well in terms of Kit Kat consumption though, so they deserve the new ruby chocolate debut honor. There are over 300 limited-edition seasonal and regional flavors of Kit Kats produced in Japan since 2000, and funnily enough — Kit Kat sounds like a play on "Kitto Katsu," a phrase meaning "You will surely win" in Japanese.

I thought it was a play on kitty cats. But... who knows.

In the meantime, Japan has surged on ahead with more weird flavors than you can count (I'm sorry, I can't stop looking them up). Among the weirdest in the lineup are golden citrus, edamame, European cheese, watermelon, corn, cough drop (?!), hot Japanese chili, pear, chocobanana, and rock salt...

And yes, the cough drop flavored Kit Kat actually delivers a dose of 2.1 percent throat lozenge powder in every serving. So you can use one next time you're sneezing up a storm.

As for me, I think I'll stick with online ordering some ruby chocolate in my favorite millennial pink shade and stay away from more exotic flavors beyond berry.

More like this
An Expert Weighs In On The Viral Raw Carrot Salad Trend
By Alexis Morillo
16 Trader Joe's Appetizers That Are Total Party-Pleasers
By Kaitlyn Wylde
Learning To Love, Not Judge, The Lunchbox Wives Of TikTok
By Esther Zuckerman
Wait, Does Liking Someone's IG Story = Shooting Your Shot?
By Alexis Morillo
Get Even More From Bustle — Sign Up For The Newsletter
From hair trends to relationship advice, our daily newsletter has everything you need to sound like a person who’s on TikTok, even if you aren’t.