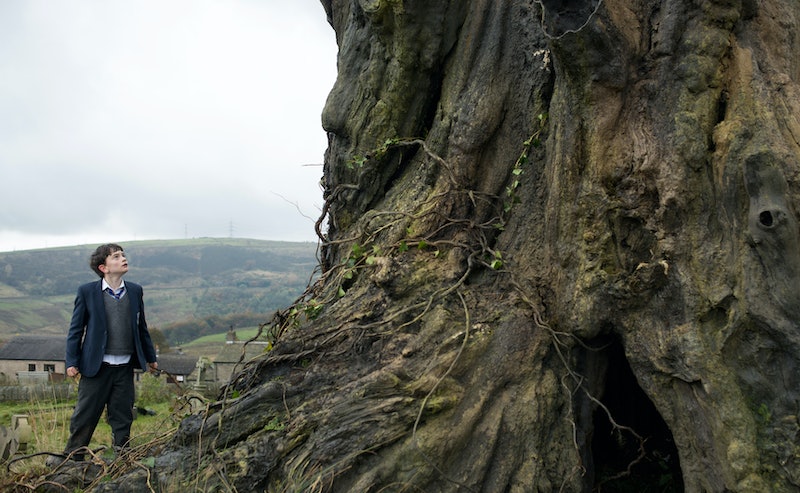 The woman who first dreamed the story of Conor and his monster didn’t have enough time. She died in 2007, leaving behind two critically acclaimed books, two unpublished manuscripts, and a smattering of details about a fifth novel: there would be a boy with a very sick mother and a magical, possibly imagined, tree who told him stories to help him make sense of his impending loss. That idea — imagined by the late British novelist Siobhan Dowd — went on to become the novel A Monster Calls by Patrick Ness, released in 2011. On Dec. 23, the movie adaptation, directed by J.A. Bayona and written by Patrick Ness, opens in theaters in Los Angeles and New York City, and on Jan. 6, it opens nationwide.

The central character of A Monster Calls is 12-year-old Conor (played by Lewis MacDougall), a precocious boy who lives alone with his mother (Felicity Jones) in the final days of her life. She is very ill, and there is never any doubt that she will die. The film opens with a nightmare — Conor’s nightmare — that his mother will fall into an abyss and that he will be unable to save her. There’s no room for subtlety; Conor is about to experience the greatest trauma of his life, and everyone knows it. To top it off, he's bullied at school, his father (Toby Kebbell) has moved to America and started a new family, and his rigid grandmother (Sigourney Weaver) has become his new guardian.

Enter the yew tree, voiced by Liam Neeson, who takes Conor on a complex journey through story. He tells him three parables on three separate nights, and through these lessons, Conor is able to come to terms with his own tragedy.

It is exactly the sort of story you would correctly assume was imagined by someone staring down their own mortality.

Author Patrick Ness and Siobhan Dowd never met in real-life (“She seemed like someone I would liked,” he tells Bustle, “She was mischievous.”), but they shared an editor: Denise-Johnstone-Burt at Walker Books, who approached Ness after Dowd’s death and asked him to complete the novel she’d dreamt in her final days. It was, in Patrick Ness’s words, a huge risk — but one that excited him.

“Being nervous about my writing keeps me honest," he says. "All you ever want in an idea is an idea that grows. The best ideas are the ones you know have legs. I immediately started thinking of other ideas.”

Dowd had left very little — a opening chapter, a few characters, and the idea that the monster would tell Conor parables. “She wrote, ‘I have really great ideas for these stories,’ but she didn’t write those down,” Ness tells Bustle, laughing.

Those little stories — each with a twist that will wrench you from the inside-out — are all Ness's imaginings. In one tale, a kind-hearted, beloved prince makes a shocking, murderous decision on behalf of his country; in another, two young girls become collateral damage in retaliation for the mistakes of their father, a preacher. These aren't your typical children’s stories, but then again, Conor's life isn't typical.

In the end, Ness has woven a story about grief in all its very real complexities: the sadness, the anger, and the regret; but also the overwhelming relief, the guilt, the feeling that you can finally begin anew.

"All of my books — one way or another — are about what happens after the end of the world,” Ness says. “[Conor] is afraid that the world is going to end. And then the world ends. And he’s still there. What do you do next?”

And there lies the heart of A Monster Calls: what becomes of those left-behind after a life comes to its finish? What comes after the loss? It seems fitting that Patrick Ness began writing this novel at the at the end, with the very last sentence. “For every book I’ve ever written, I’ve known what the last line is going to be before I start," he says. "It's the exit feeling."

Patrick Ness never writes down the final sentence of his books, and you won’t find it written in this article. But the last line of A Monster Calls is the crux of the novel — the hopeful ending that Conor needs. The reminder that he persists, even after the end of his world.