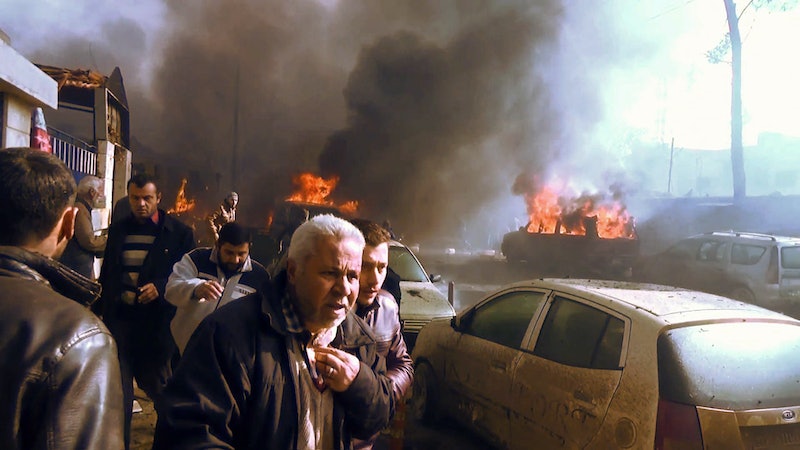 At least 48 people were reportedly killed on Saturday in the Syrian city of Azaz after a car bomb exploded outside a courthouse and near a bustling marketplace. The attack is an important reminder that despite the battle of Aleppo coming to an end in December, the conflict in Syria as whole is nowhere near over.

President Assad's capture of Aleppo, the largest city in the country both in terms of population and geography, was a significant victory for the government, but one look at the divisions in a current map of Syria is all one needs to realize how many complications still remain for peace in the region.

Assad himself did not expect the civil war cease after seizing control of the city. "It's true that Aleppo will be a win for us, but let's be realistic — it won't mean the end of the war in Syria," he told the Syrian newspaper Al-Watan. "But it will be a huge step towards this end."

Following the nonstop destruction in Aleppo, rebels and civilians were forced out of the city and relocated in rebel-held locations like Azaz, which is situated roughly 25 miles away. A large chunk of Syria's territory northwest of Aleppo is still controlled by rebel groups, an area the will almost undoubtedly attract more of the government's force following Assad's gain in December.

Estimations of the death toll in Syrian since the conflict began in 2011 typically calculate at least 400,000 fatalities. The Syrian Observatory for Human Rights reported the number to be between 312,000-450,000 in December; Syrian Centre for Policy Research made an estimation in February of roughly 470,000 victims.

Jan Egeland, a senior advisor on Syria for the United Nations, expressed hope on Jan. 5 that 2017 would bring change within the country. “After five ruthless war years, we can have a year of diplomacy, of conflict resolution, and of protection of civilians, it can happen," he said. "We were heartened to hear that Russia and Turkey both said [that] they will facilitate humanitarian access to all civilians as part of the Cessation of Hostilities Agreement that they function as guarantors for.”

In December, the United Nations supported efforts toward Russian-Turkish truce meant to bring the Syrian conflict closer to its end; as things currently stand, the Russian government supports Assad's mission to gain control of the country, while Turkey supports the rebel-led effort to end Assad's regime. While withdrawal from both nations would indeed lessen the strength of both Assad's forces and of rebel groups, it remains to be seen how the truce would address the continuing conflict of the groups on their own, as well as ISIS' influence on the region as the group persists in its attempts to seize parts of Syria.

Today's attack in Azaz should definitely remind us to continue helping out in any way we can.