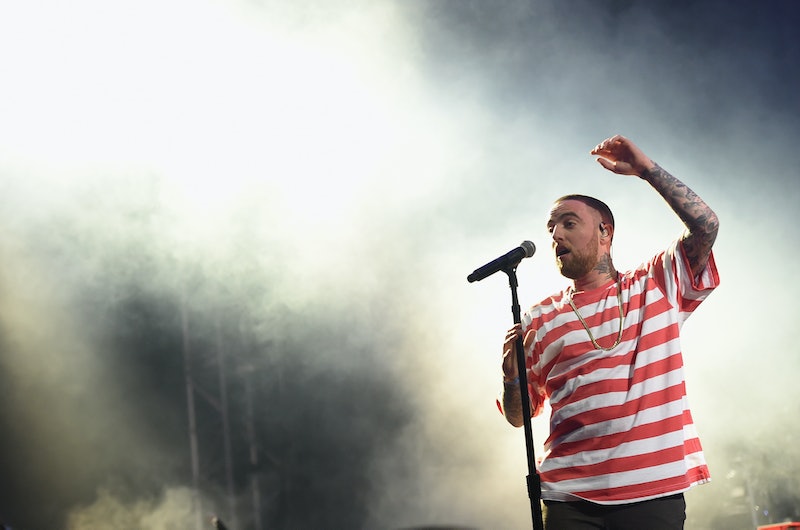 Mac Miller's death left fans distraught, not only by the loss of an artist, but the loss of future music he might have created. On Wednesday, Jan. 8, it was announced that Mac Miller's posthumous album Circles will be released on Friday, Jan. 17, over a year after the rapper's untimely death in September of 2018. Miller's family took to his original Instagram page to announce the news, and fans can hardly wait.

In the post, Miller's family explained that prior to his death, the rapper was working on Circles, a companion record to Swimming, which ended up being his final album. As they explained, Miller intended for the albums to have different sounds that complimented one another, with the overall concept for the project being "Swimming In Circles."

According to the statement, the rapper was working with producer Jon Brion on both projects. And after his death, Brion decided to finish the album in his honor. “After his passing, Jon dedicated himself to finishing Circles based on his time and conversations with Malcolm,” the family wrote. “We are so grateful to Jon and to those who gave their best to the difficult and emotional task of putting out this body of work.”

Miller died of an accidental drug overdose in September of 2018, just over a month after he released Swimming, which became one of the most critically acclaimed albums of his career. In October of 2019, three men were charged with the alleged distribution of the drugs that led to Miller's death. The cases are currently ongoing.

Miller's family noted that the creation of this album was a "complicated process" with "no right answer," but they kept going in order to fulfill the rapper's wishes. "We simply know that it was important to Malcolm for the world to hear it," they said.

One of the most difficult aspects of the process, they explained, was how to communicate the news to fans in a meaningful way "while keeping sacred what should be kept scared." As a result, they will no longer be using Miller's forner Instagram after this note, and any news about Circles, his charity, and other projects will be posted on the page @92tilinfinity.

The family concluded their letter by simply asking the world to give the new album a chance. “We are left to imagine where Malcolm was going and to appreciate where he was,” they said. “We hope you take the time to listen. The look on his face when everyone was listening said it all.”

More like this
The Jonas Brothers' New Album Has A Very Meta Name
By Alyssa Lapid
Austin Butler Recalls Lisa Marie Presley Showing Him Elvis’ Bedroom
By Jake Viswanath
Jameela Jamil Defends Sam Smith After Trolls Body-Shamed Them
By Jake Viswanath
Linda Ronstadt’s “Long Long Time” Plays A Pivotal Role In The Last Of Us
By Brad Witter
Get Even More From Bustle — Sign Up For The Newsletter
From hair trends to relationship advice, our daily newsletter has everything you need to sound like a person who’s on TikTok, even if you aren’t.