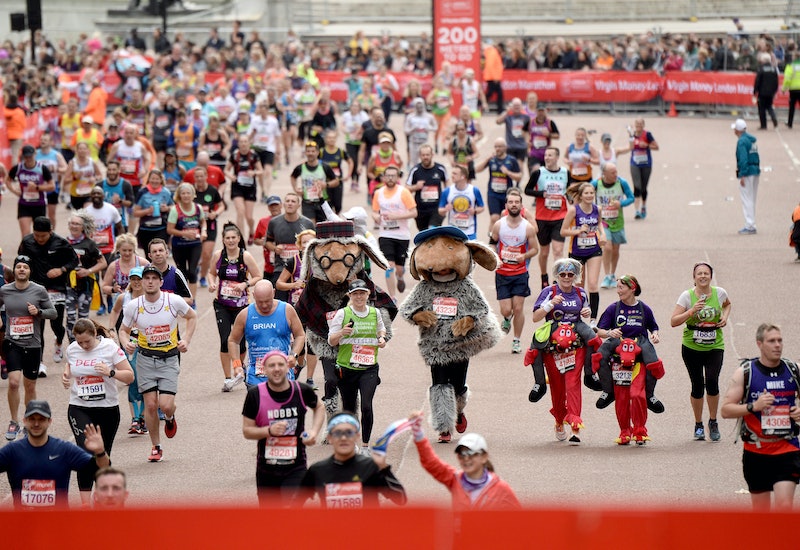 A woman who vied to beat the world record for running a marathon in a nurse's outfit was rejected despite her winning time, CNN reported. Jessica Anderson, a London-based nurse, said she was denied her marathon world record because her nurse outfit included pants, not a dress. She said that Guinness World Records refused to reconsider her application.

"I was quite taken aback when I read that they’d rejected my application and I did email them to ask them to reconsider but they said no," Anderson told Runner's World. "I get that it’s supposed to be a fun thing but their definition is just so outdated. Some of the nurses I work with do wear dresses but mostly we wear scrubs or a tunic and trousers. I’ve certainly never seen a male nurse wearing a dress to work."

Anderson had run her race in scrubs, CNN reported, which she says is the uniform she actually wears to work. Guinness World Records reportedly told Anderson that her scrubs were too closely aligned to what the organization classifies as a doctor costume, per CNN.

"I’m sure Guinness World Records don’t intend to cause offense, but it would be nice if they decided to revise their criteria instead of reinforcing old gender stereotypes," Anderson told Runner's World.

In a statement, Guinness World Records said that it would soon review its outfit requirements for the category.

"Inclusiveness and respect are values that Guinness World Records holds extremely dear, and while we always need to ensure we can differentiate between categories, it is quite clear that this record title is long overdue a review, which we will conduct as a priority in the coming days," the organization said, according to CNN.

The BBC reports that the organization originally remained firm in its nurse costume requirements. Per the outlet, a Guinness World Records representative initially told Anderson, "For the purposes of this record, the nurse's uniform must include: a blue or white nurse dress, a white pinafore apron, a traditional white nurse's cap. Tights are optional."

In light of her world record rejection, Anderson has received support from many people on social media, The New York Times reports. Many have chimed into her cause under the hashtag #WhatNursesWear, where users are, among other things, drawing attention to the fact that many nurses opt to — or have to — wear scrubs while they are at work.

"The 21st Century is calling," one nurse tweeted. "Nurses wear scrubs like doctors do and suits like men do. Congrats to @Janderzzz for busting a record and busting gender bias."

It wasn't immediately clear on Sunday whether Guinness World Records would reconsider its decision about Anderson and her bid to beat the standing record. However, that's exactly what many using the #WhatNursesWear hashtag on Twitter asked the organization to do. What was clear, based on the available tweets, is that nurse uniforms come in a multitude of styles, and virtually none shared on social media resemble the old-fashioned dress ensemble described to Anderson.