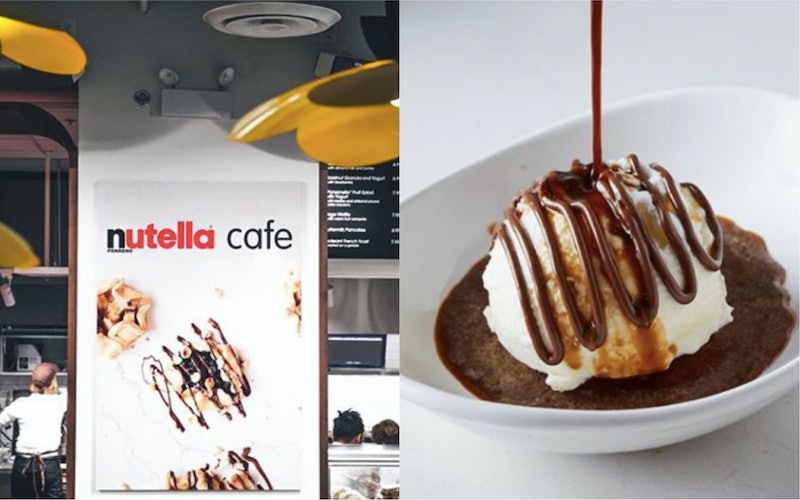 As all true Nutella stans know, Ferrero, the Italian company responsible for your chocolate hazelnut spread-induced dreams, opened a Nutella cafe in Chicago in 2017. It looks like we should all thank the Windy City for repping it, because apparently that cafe has been such a success that Ferrero just announced intentions to open a Nutella cafe in New York City right on its heels — one that will be opening before the end of 2018.

According to a press release, this is already such a done deal that they even have a location set. The cafe will open near Union Square at 13th Street and University Place, aka right next to the subway station I use to get to and from work, making me approximately the smuggest person on this planet right about now. The cafe will feature "Nutella-inspired cafe menu and specialty espresso beverages," just as its Chicago predecessor does.

"There truly is nothing like the taste of Nutella hazelnut spread, and with the overwhelmingly positive reaction to Nutella Cafe Chicago, we know our fans feel the same way," said Rick Fossali, Nutella Cafe's vice president of operations, in a statement. "It's their excitement that propelled us to open another Nutella Cafe and continue to showcase the uniqueness and versatility of this beloved product."

Okay, okay, but back to the more important matters at hand — what exactly is going to be on the menu? While Nutella hasn't confirmed any specific menu items, it's safe to assume that, after the success of the Chicago location, they're going to adopt a similar strategy. And if you've been keeping an eye on the Instagram page for Chicago's Nutella cafe, you already know that the offerings will be well worth the wait for this particular expansion.

Take, for instance, these steel-cut oats made with almond milk and topped with raspberries, hazelnuts, and Nutella.

Or — be still my blueberry beating heart — this blueberry crostata, a true innovation of fruit, dessert, and chocolate that I should probably stop staring at if I'm going to get any real work done today, but alas, cannot.

Also on the delectable lineup of possibilities? An Affogato, which is a "scoop of Fiordilatte gelato drizzled with Nutella hazelnut spread, served with a warm espresso shot to pour on top." Not that you really need words to describe the "afkgjlkgadflja" that the picture alone induces.

Then there's also this gem, which appears to be a Nutella hazelnut flatbread.

And for the particularly bold, you can get your savory with your sweet — this offering, a buckwheat Nutella crepe, comes with a poached egg and arugula.

The café has options for Nutella lovers on-the-go, too — in the form of these adorable wee Nutella sandwich cookies.

The long and short of this is that I'm giving my landlord notice and moving into this cafe immediately, because it looks like there isn't a single mealtime that Nutella hasn't managed to master.

"Nutella is global power brand and the popularity of the spread is built on Ferrero's uncompromising focus on quality ingredients," said Fossali in a statement. "As a multicultural epi-center, New York gives us the opportunity to explore and offer new ways for our local fans to enjoy Nutella, while reaching millions of tourists visiting the city."

While the intentions for the cafe were announced on June 7, so far all we know about the official launch date of the cafe is that it will happen "by the end of the year". Until then, you can find me waiting on the sidewalk outside of the construction area, holding up a recently emptied Nutella jar like a candle to the wind.