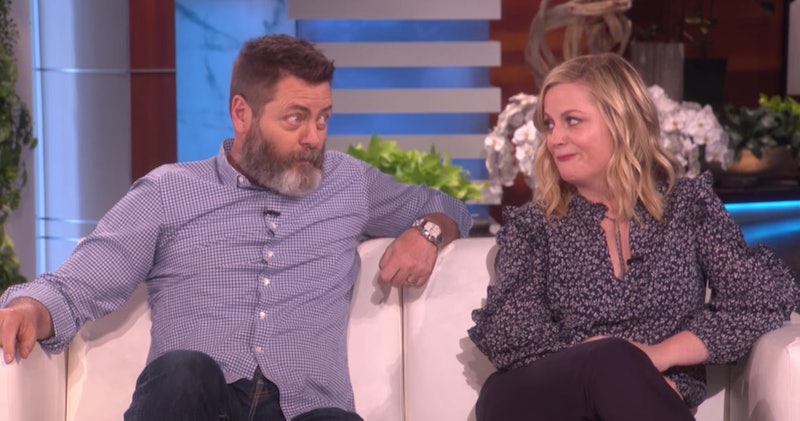 TheEllenShow/YouTube
By Allyson Koerner
May 24, 2018

It's the time of TV revivals and it sounds like at some point Parks and Recreation could be revived, according to Amy Poehler, that is. While promoting her new NBC competition series, Making It, with Nick Offerman on The Ellen DeGeneres Show Thursday, Poehler spoke on behalf of the entire cast and said they would all absolutely return to their Pawnee, Indiana roots.

"I'll speak for everybody and say we would all do it," Poehler told Ellen DeGeneres. "I think we'd all do it someday. It'd be amazing."

As for Offerman, he joked, "Amy's the boss of the show."

Poehler and Offerman, who played Leslie Knope and Ron Swanson, respectively, in the beloved NBC comedy, also teased the only way a revival would happen is if a particular superstar of a singer would come on as Pawnee's mayor. "We said that if Beyoncé will play the mayor we'll bring the show back," Offerman said, before clarifying, "This is Beyoncé Knowles." You know, because there are so many Beyoncé's. Poehler also said Oprah (you know, Oprah Winfrey) could also be the mayor.

Whoever plays the city's mayor, all that matters is there's hope for a Parks and Rec reunion. Some fans might not agree and just want it well enough left alone. The comedy ended pretty much perfectly in 2015 after seven seasons, so why mess with it by reviving it? It's a valid point, but there's no denying it's always wonderful to see a cast you watched for several straight years reunite.

Even simply seeing Offerman and Poehler interact during an interview is heartwarming. It makes you miss the good old days of the Parks and Rec office, Li'l Sebastian, Mouse Rat, and everyone slamming Jerry every chance they got.

Who knows if a Parks and Rec revival would even happen, but Poehler is probably right about everyone wanting to do it. This show didn't only mean the world to fans, but also to the cast.

On Twitter Tuesday, a fan asked Chris Pratt, "Out of every film and television role that you've played, which role brought you the most joy?" His answer? Andy Dwyer, of course. "Pure joy? Andy Dwyer," the Guardians of the Galaxy star replied. "Loved everything about it. And got to do it while 7 minutes from home. The best. Miss my @parksandrecnbc crew."

Soon after, most of the cast followed in Pratt's footsteps and echoed his sentiment. Here's how Offerman, Rob Lowe, Adam Scott, and Retta all reacted on Twitter:

The fan who started it all by tweeting Pratt couldn't have been more thrilled with the reaction. On Wednesday, he tweeted, "So, in the aftermath of my tweet to @prattprattpratt and his reply about being happy during the @parksandrecnbc days and missing it, @RobLowe, @Nick_Offerman, and @mradamscott have all jumped on the bandwagon too. What about you @JimOHeir, @azizansari, @evilhag, & @unfoRETTAble?"

And, yes, he received another response from Jerry (Jim O'Heir), himself. "Working on @parksandrecnbc was the best experience EVER," O'Heir tweeted. "The cast, crew and producers made it the best place to work and play. Forever grateful and blessed to have been a part of it. xoxoxoxo".

In July 2017, Aubrey Plaza (who played April Ludgate) told Us Weekly she's absolutely down for a reunion. "I hope so!" she said. "I feel that would for sure happen at some point."

It's clear Parks and Rec was the best show to work on. It changed the cast's lives for the better. Based on their tweets, it's hard to imagine any of them saying no to a revival. Although, it would depend on schedules and whatnot. Some might even think Pratt is just too famous these days (he does play a Marvel superhero) to go back to the goofy, dim-witted, yet lovable, role of Andy, but it sure sounds like he would, especially since it was such a joyous time for him.

Plus, as Pratt told Sirius XM radio show Sway’s Universe in December 2016, "Well, it’s hard to say. I would never rule it out. There’s jobs I’ve done in the past where I could safely say I would never do that again, but Parks And Rec is not one of them." He later added, "But because of the nature of that show kinda mimicking time, I definitely wouldn’t rule out seeing it again; seeing us get back together for something, for a movie, or for another season down the line. Possible spin-offs or whatever."

So, who do fans need to get in touch with at NBC to get the ball rolling?