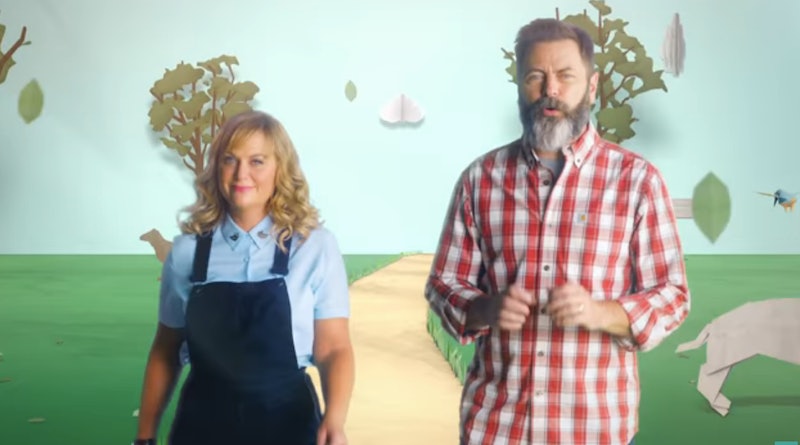 If you find yourself rewatching episodes of Parks and Recreation on Netflix over and over again, you're not alone. The NBC comedy was a classic, and according to fans on Twitter, wondering what Leslie Knope has been up to these days is totally normal. As it turns out, Amy Poehler and Nick Offerman are reuniting for a craft show that has Parks and Rec vibes written all over it, so it looks like you won't have to wonder much longer.

According to Entertainment Weekly, Poehler and Offerman will be stepping into the roles of judges for NBC's new reality competition, titled Making It, and their dynamic in the promo is super reminiscent to that of the beloved Ron Swanson and Leslie Knope from the iconic comedy starring the two. In the trailer, the hosts describe the upcoming project as "a friendly competition" in which the contestants are asked to craft things out of "unexpected materials" — from fabrics to woodworkings.

According to the trailer, the show is slated for a July 31 premiere, so it'll be some time before fans of Poehler and Offerman will get to feast their eyes on Making It. But, the lengthy wait doesn't necessarily translate into extreme apprehension for Parks and Rec fans, because they'll just spend the upcoming months revisiting all seven seasons of the hit.

For those who need a painful reminder, Parks and Recreation ended in 2015 after seven seasons focusing in on the Pawnee, Indiana parks department colleagues. The finale ended on a high note, with viewers getting a look into the future of these coworkers-turned-friends — some hilariously dying (yes, apparently even death is hilarious on the show), while others are living out their wildest dreams well into the year 2048.

Though strong, hilarious, and witty, it's been said that the comedy didn't get the love it deserved by critics, and fans would likely agree. The show's lead Amy Poehler won a Golden Globe in 2014 for her performance as the optimistic aspiring bureaucrat Leslie Knope, and the ensemble won a slew of Critics Choice and TCA Awards. But when perusing social media, it seems as though the comedy didn't garner its cult-following until after it came to a bitter end. Today, however, "Leslie Knope 2020" memorabilia, as well as GIFs highlighting some of the show's most iconic moments, can be found all over the web, proving that Parks and Recreation definitely still holds up.

All of the seasons are currently available for marathoning on Netflix, and its accessible streaming could be attributed to the spike in fandom since its 2015 end. Nevertheless, whether a fan since its inception or a newbie, it's clear that folks can't get enough of rewatching the antics of Leslie Knope and her parks department gang.

As for Making It, fans didn't necessarily need an in depth description of the upcoming project to sign on as weekly watchers. Because once finding out that its premise is surrounding arts and craft, and that the iconic duo of Poehler and Offerman would be at its helm, they were sure that it's going to be worth a watch.

Making It won't replace the NBC classic, but it sounds like the next best thing — especially if you missed seeing Ron and Leslie interact on your television screen. Besides the aforementioned, no other information has been released as of now, but fans should definitely be on the lookout for new developments. After all, the hosts could decide to turn their mini Parks and Rec reunion into an even bigger shindig — inviting the rest of their former NBC castmates to hang out for special challenges, maybe?

Only time will tell, but in the meantime, feel free to relive all of your favorite Parks and Rec moments on Netflix.