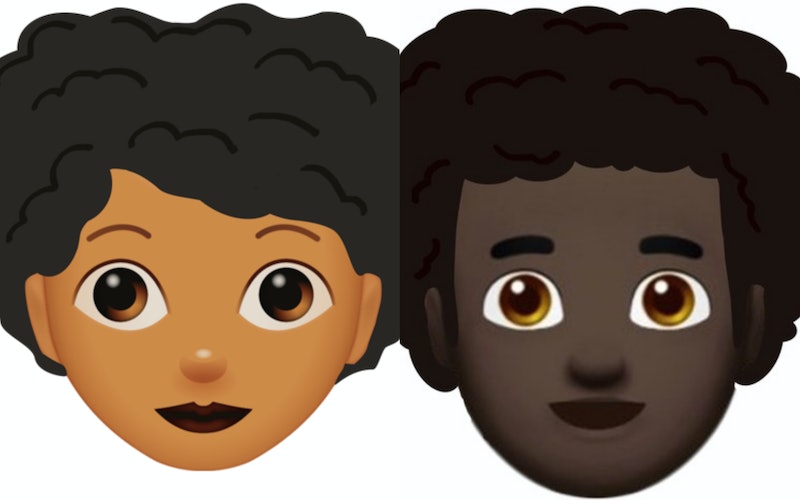 It's an exciting time when a new set of emoji hit your phone. Now we have a red face that is also sweating and sticking its tongue out? Great! But, because emoji are so widely used and there are so many of them representing so many different walks of life, they've taken on more meaning than just your typical old school smiley. That's why one woman is looking to get yet another emoji added: an emoji with Afro hair.

Rhianna Jones started a petition on Change.org called "Let's Make the Afro Hair Emoji Happen #AfroHairMatters." As she explains to Bustle via email, "All emoji have straight, downward falling Eurocentric hair. Afro haired users like myself don’t have any options that reflect our hair or cultural identities. Our hair defies gravity, takes up space and deserves a place in our digital conversations too."

It might not seem like that big a deal to some, but there are a lot of emoji already and they show such a wide range of people: There are a variety of skin tones. There's young people and old people. Emoji representing straight couples and gay ones. Emoji with turbans. Different types of families, including single parents. Curly-haired and red-headed emoji were added more recently. Clearly, representation is something that's greatly considered when emoji are chosen, so emoji with Afros are just a natural, inclusive fit.

Jones decided to start her petition after hearing about a successful campaign to get interracial couple emoji added. "Two weeks ago Tinder’s campaign for interracial couple emojis was approved, one year after launching their change.org petition. As a biracial woman this resonated deeply with me, and while I love the inclusivity of different skin tones, there still isn't a single emoji that resembles me," Jones tells Bustle. She adds, "The proposal is due at the end of the month so time's not on my side, but it felt serendipitous."

Jones teamed up with her "fellow Afro’d friend" graphic designer Kerrilyn Gibson to bring the Afro emoji idea to life. Gibson created an Afro emoji man and woman in all skin tones and hair colors, and they named the woman Frolange. Gibson explained what an Afro emoji would mean to her on Instagram, writing in part, "...representation — whether it be big or small — matters... and I’m hoping to impart a small change that could possibly make a biiig impact."

As you can see in the GIF below, the emoji include all the skin tones and hair colors that are currently offered on the other available emoji, including lighter skin tones with blonde hair. For Jones, this is all part of the inclusivity. "Just as there are black and African people with light features, there are Caucasian people whose hair grows in a similarly upward shape," Jones explains to Bustle. "The purpose of cultural inclusivity is to present all shades and flavors of humanity. I want the Afromoji to be for anyone who identifies with that big hair energy."

The Change.org petition will be submitted to the Unicode Consortium, which chooses which emoji are encoded, on March 31. Mark Davis, the president and co-founder of Unicode told Fortune of emoji proposals in 2017, "We get submissions from all over the world. The hijab emoji came from a Saudi Arabian young woman who is living in Germany who made a very compelling proposal." According to Unicode, around 60 emoji are added per year. Jones hopes hers makes the cut for 2020.

"Strides are being made in creating a more digitally inclusive experience for all users, but the lack of hair diversity is a subtle yet constant reminder that our hair is societally inferior," Jones tells Bustle. "With the Afromoji I want all nuanced Afro’d people to see themselves in their textual conversations. It’s 2019, we’re a world living online and our digital platforms should be as diverse as our IRL experiences."