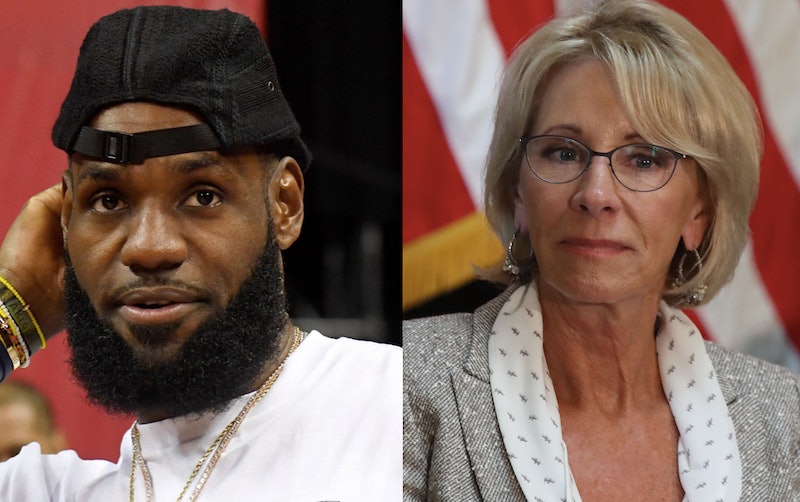 A petition demanding a new education secretary has received well over 5,000 supporters, just one day after it went up. Created by Rebecca G. of The Care2 Community, the petition calls for LeBron James to replace Betsy DeVos as education secretary, and its sole recipient is President Donald Trump.

In her call to put James in place of DeVos, Rebecca wrote, "Pretend there are two candidates for U.S. Secretary of Education — the federal cabinet position responsible for the education future of over 74 million children in the country — and YOU get to hire them." Rebecca then touted the NBA player, who recently transferred to the LA Lakers, as an excellent replacement for the current education secretary.

"The first candidate is famed athlete LeBron James, a highly respected and extremely influential community advocate and activist who recently opened a state-of-the-art public school for at-risk children in Akron, Ohio — with community services on-site like job placement for parents, guaranteed college tuition for every student who graduates, and a score of other student services like a FREE bicycle and helmet," she wrote.

On the other hand, there is DeVos. According to Rebecca, DeVos is a "scandal-ridden Republican donor" with an "inexcusable dislike for public education." Rebecca also highlighted the current education secretary's role in withdrawing federal guidelines for women and students of color along with her record on guns in schools. Rebecca was presumably referring to DeVos citing "potential grizzlies" as a reason for keeping schools armed in 2017.

The petition comes a week after James opened his I Promise School in Ohio as part of the LeBron James Family Foundation. SB Nation reported that James explained his vision for the school for children in Akron, Ohio, and said, "Everything these kids are going through — the drugs, the violence, the guns, everything they're going through as kids, I know. For me to be in a position where I have the resources, the finance, the people, the structure, and the city around me — why not?"

According to SB Nation, what sets James' school program apart from local programs is that it emphasizes an unconventional school routine — longer than the normal schedule — that is aimed to bring at-risk children to the same level of students in other schools. For those who might be lagging behind, the I Promise School is geared toward helping them catch up with their designated school grade. Additionally, teachers will be given the resources to help young children deal with home-related stress, including their parents' tight budgets.

The basketball legend's educational endeavors seem to have won him thousands of fans — that, too, in spite of Trump's disparaging tweet about James and CNN's Don Lemon. In her petition, Rebecca encouraged people to sign her call for "DeVos to be fired and LeBron James to be named as U.S. Secretary of Education."

"LeBron James is an inspiration to kids all over the country," Rebecca wrote. "He's shown he cares about America's youth and understands the power of public education in helping children meet their true potential."