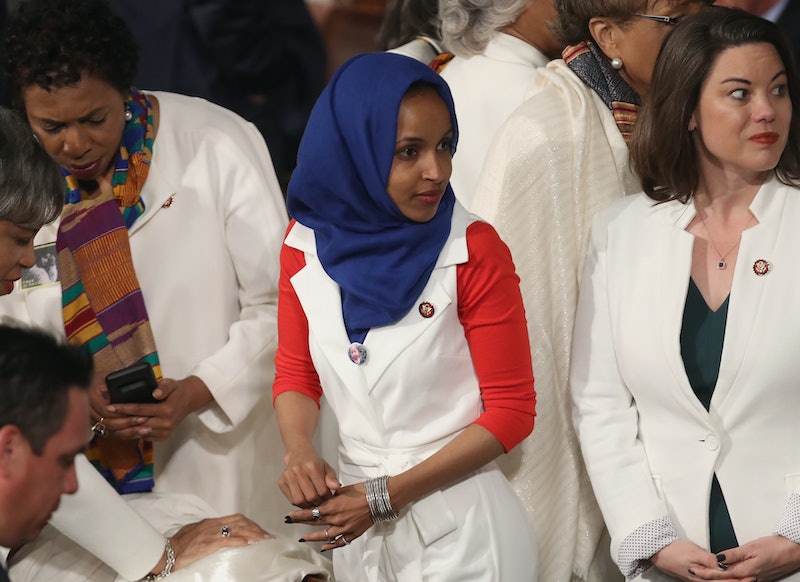 A video uploaded by President Donald Trump on Friday, which targeted one of the Muslim women on Capitol Hill, has elicited strong criticism and rebuke from thousands online. According to Newsweek, a public appeal posted on the progressive organizing platform, Action Network, suggests punishing Trump for his Ilhan Omar tweet. The petition, which wants to suspend POTUS from social media, has received more than 23,000 signatures so far with a goal to reach 25,000.

According to The Hill, the national Women's March organization sponsored the petition , which reads, "[Trump's video] is as dangerous as it is unprecedented." It also notes that the president was "inciting violence against a Black Muslim sitting member of congress, putting her life at risk."

Ultimately, the goal of the petition is to stop the president from accessing his Twitter account. "Suspend [Trump] from Twitter and Facebook for inciting violence and engaging in hate speech," the petition reads. "Remove his propaganda video targeting Congresswoman Omar."

It all began on Friday after Trump uploaded a video of the Sept. 11 terrorist attack juxtaposed with Omar's comments about how Muslims are treated in America, The Washington Post reported. The clip appeared to depict the Minnesota Democrat as if she was treating the attacks as trivial and unimportant. Critics slammed Trump for the misleading video and spoke of the potential dangers it could create for Omar's physical safety.

On Saturday, Omar defended herself and spoke of her love for the United States on Twitter. "No one person – no matter how corrupt, inept, or vicious – can threaten my unwavering love for America," she wrote. "I stand undeterred to continue fighting for equal opportunity in our pursuit of happiness for all Americans."

On Sunday, Omar then released an official statement detailing the death threats that she said she had received after Trump tweeted about her. "Since the president's tweet Friday evening, I have experienced in an increase in direct threats on my life," she wrote, "many directly referencing or replying to the president's video. I thank the Capitol police, the FBI, the House Sergeant at Arms, and the Speaker of the House for their attention to these threats."

Following Trump's tweet, House Majority Leader Nancy Pelosi said that she put in a request for increased security for Omar, CNN reported. The outlet noted that Pelosi said, "They will continue to monitor and address the threats she faces." At the moment, Trump's spliced video of Omar remains on his Twitter account.

It's not clear if Trump intends on taking the controversial video down from his Twitter account but the White House has defended the president's criticism of Omar. On ABC News' This Week, White House Press Secretary Sarah Huckabee Sanders said that Trump's commentary on Omar was "a good thing." Still, she emphasized, "certainly the president is wishing no ill will, and certainly not violence towards anyone."

It's clear, especially after taking a glance at the petition, that not everyone agrees with her take on the situation.