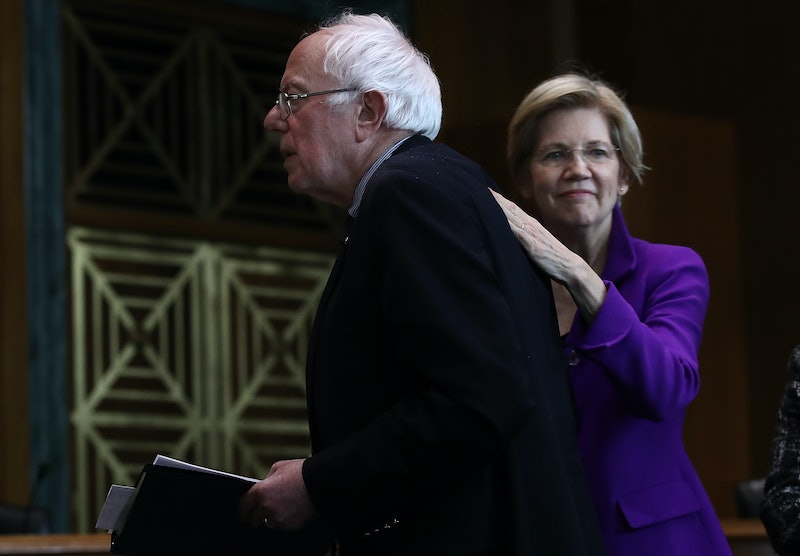 In their road to the first debate of the Democratic presidential primary, two 2020 candidates boarded the same plane — and you can bet Twitter had a lot to say about it. A photo of Sens. Bernie Sanders and Elizabeth Warren sitting near each other on a plane went viral over the weekend, spurring a number of jokes about their seating arrangement.

When The Hill's Steve Clemons boarded a flight bound for Miami, Florida, on Thursday night he spotted Warren sitting just behind Sanders, both of them in window seats. According to Clemons, Sanders occupied seat 15A while Warren was in seat 16A.

"I'm going to kick it the exact moment he thinks I won't," Clemons supposed Warren said to herself.

Almost immediately social media users began to crack jokes about the pair's arrangement on the plane. "They are both seated above the left wing," journalist Jackson Proskow wrote in a tweet.

"She looks like she's just doing her own thing but really, @EWarren is figuring out how to leapfrog @BernieSanders and end up in 14A," journalist Todd J. Gillman tweeted.

Reuters' Pete Schroeder joked the picture was representative of that feeling when "you see a coworker outside of work and you try and figure out how much you actually have to interact."

According to Real Clear Politics, recent polls from the Economist and Monmouth had Warren coming in just ahead of Sanders. In the most recent Economist poll, Warren drew the support of 16% of respondents compared to Sanders, who had 12%. In the Monmouth poll, Warren garnered support from 15% of respondents, while Sanders pulled in 14%.

Earlier in the week, Sanders shared a Politico article claiming "centrists" were settling on Warren as an alternative to himself. "The cat is out of the bag," the Vermont senator tweeted. "The corporate wing of the Democratic Party is publicly 'anybody but Bernie.' They know our progressive agenda of Medicare for All, breaking up big banks, taking on drug companies and raising wages is the real threat to the billionaire class."

Sanders later moved to clarify the intended target of his tweet in an interview with CNN. "That tweet was not about Elizabeth Warren at all," he told CNN's Chris Cuomo on Cuomo Primetime, per The Hill. "Not at all. Elizabeth is a friend of mine, and we're going to run what I hope are issue-oriented campaigns." Instead, Sanders said he was criticizing the think tank Third Way, which he called "the corporatist wing of the Democratic Party."

Sanders and Warren are both set to debate a slew of their fellow 2020 presidential rivals on June 26 and 27 in the first of the Democratic Party's primary debates. Due to the party's crowded roster of 2020 candidates, the first debate of the election has been spread across two nights, with 10 candidates debating on night one and the other 10 on night two. Sanders and Warren are expected to appear on different nights.