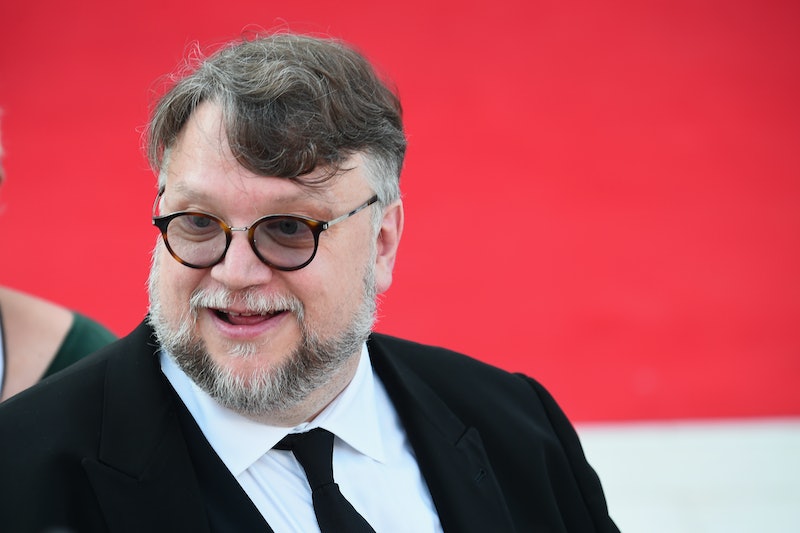 In today's news you didn't know you needed until you got it — Guillermo Del Toro will direct a Pinocchio remake. Netflix announced the collaboration on Monday, Oct. 22 with a tweet that immediately had fans' brains spinning, visualizing what they could expect from a reimagining of the Disney classic. It's the kind of artistic pairing so perfect that you can't believe you didn't think of it yourself, and now that it's here, you can't imagine living without it.

This project is still in the very early days, so there aren't many details available just yet, but here are some basics that we do know. The project will be done in stop-motion, in collaboration with puppetry experts from the Jim Henson Company. It will also be a musical, which Del Toro will write, produce, and direct, and it's long been a dream of the renowned director's to get his hands on this nostalgic classic. Here's the Pinocchio announcement in the streaming platform and Del Toro's own words, via the official Twitter account for Netflix Films:

"Breaking Guillermo del Toro news: The Academy Award-winning filmmaker will write, produce, and direct a stop motion musical version of Pinocchio for Netflix. Del Toro explained, 'I’ve wanted to make this movie for as long as I can remember.' Jiminy Cricket!"

But before you start imagining that the famed director will be doing a shot-for-shot remake of the heartwarming Disney original, don't get too comfortable. The Twitter account was quick to addend their original announcement with an ominous note: "...And it’s safe to say that Jiminy won’t be in Guillermo’s version."

Basically, don't come around here expecting any cheerful little cricket mentors who will help our protagonist stay on the right path, because this Pinocchio is on his own.

Del Toro is known for his direction of eerie, fantastical hits like Pan's Labyrinth and The Shape of Water, the latter of which netted four Oscars, including Best Director and Best Picture at this year's ceremony. His works get under your skin and stay there, swirling around in your brain until the images he paints take up permanent residence there. (Admit it, you still think about that creepy character from Pan's Labyrinth with eyes on its hands at least once a week.)

So who could be a better choice to helm a surprisingly-horrific story like Pinocchio? Maybe you don't think of the story of the little wooden puppet that wanted to be a real boy that way, but the more you put your mind to it, the more you'll realize it's right up the Mexican director's alley. The scene where Pinocchio is locked inside a birdcage? Or swallowed by a whale? Or transformed into a donkey against his will? Those scenes were likely jarring enough to stick in your brain even the first time around, so imagine how discomfiting they'll be in Del Toro's hands.

Already, early reports from Variety have us breaking out in head-to-toe goosebumps. The outlet reports that Netflix's Pinocchio will be placed in 1930s Italy, a time when the country was under the thumb of infamous Fascist dictator Benito Mussolini. So some nice, light fare! And by the sound of it, Del Toro is planning on drawing out some darker familial relationships than viewers saw in the 1940 Disney version. As the 54-year-old told the outlet in a statement:

“No art form has influenced my life and my work more than animation and no single character in history has had as deep of a personal connection to me as Pinocchio. In our story, Pinocchio is an innocent soul with an uncaring father who gets lost in a world he cannot comprehend. He embarks on an extraordinary journey that leaves him with a deep understanding of his father and the real world."

Hoo boy. "An innocent soul with an uncaring father" — what could go wrong? Everybody better buckle up for this remake, because it sounds like it's going to be an intentionally bumpy ride.