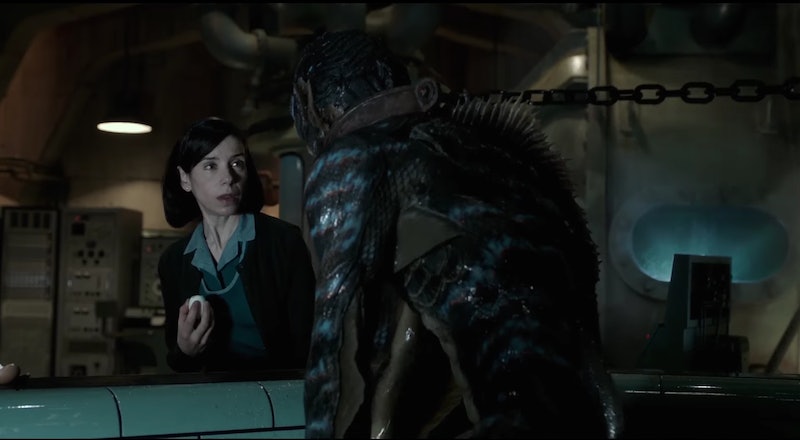 Known for lush, nightmarish films that often get labeled as horror, Guillermo del Toro is a man who knows his monsters. From the giant kaiju of Pacific Rim to the bloody, vengeful ghosts haunting Crimson Peak, the director's terrifying on-screen creations stay with you long after the movies fade. In a change of pace, his his latest film, The Shape Of Water is more of a straightforward love story — albeit with a monster as one of the participants. And while it's not known exactly what kind of creature is in The Shape Of Water, the character is just as memorable as those from del Toro's earlier works.

The Shape of Water is a gorgeous fairy tale for adults, the story of an unlikely romance at the peak of the Cold War. Del Toro's done fantasy and fairy tales before with Pan's Labyrinth and Crimson Peak, but this movie is unique, feeling like an inverted Beauty And The Beast. Love slowly blooms between mute janitor Eliza (Sally Hawkins) and a mysterious creature held at the secret government facility Eliza works for, and yes, things get intense — and (spoiler alert!) sexual — from there.

For del Toro, The Shape Of Water is the chance to rectify a formative childhood disappointment — when he first saw The Creature From The Black Lagoon, he thought the creature would end up with a happy ending, only to be disappointed. Actor Doug Jones told Inverse of the director, "He wanted to make the movie, finally, where the monster gets the girl.” Known in The Shape of Water only as The Asset, the monster also had to have a design that'd cause audiences to overcome their skepticism. In an interview with Wired, del Toro pored over every detail of the creature's amphibious physique, saying it took more than three years working with sculptors to get the exact balance of alien and alluring just right. That includes a strong Greek nose based on Michaelangelo's David, perfectly sculpted butt, and razor-sharp claws.

In a Newsweek interview however, del Toro was quick to point out The Asset is more than just amphibian. “He’s not an animal, he’s an elemental river god,” the filmmaker said. The movie takes place in Camelot-era America, before the Kennedy and Martin Luther King assassinations, when optimism and a bold future were American goals. Plunked right into the middle of this is the creature, an ancient power from realms unknown to most mankind. "The natives in the Amazon worshipped it as a god," says project leader Strickland in the film of the creature.

Yet the monster's uniqueness makes some people, like Strickland, view it as a danger; if it can't be compartmentalized by science, what use is it? Other members of the research team, and especially Eliza, quickly realize The Asset's intelligence and ability to feel and communicate, though, and work to save it from certain death.

But del Toro was careful not to take away the The Asset's inherent otherness by making him human. In an Inverse interview, Jones said, “Guillermo had to remind me I’m an animal. I had to fight the instinct to have human reactions." The monster must remain a monster, yet still earn audience empathy. That's the genius of The Shape Of Water, a film where so many of the characters are marginalized in this "ideal" America — to have audiences grasp differences without fear, and respect them instead of trying to convert or alter them.

A number of fans have noted a resemblance between The Asset and another of del Toro's aquatic creatures, Abe Sapien from Hellboy. In a Hollywood Reporter interview, Jones, who played both Abe and The Asset (along with a number of other del Toro creatures) said, "Guillermo was very specific, he did not want Abe Sapien in this film at all." He goes on to elaborate that while Sapien was a gentle, mannered, and articulate creature, The Asset is wild, raw, and though it doesn't speak, is intelligent enough to learn how to communicate with Elisa.

Early reviews for the film have lavishly praised The Shape Of Water, with The New York Times calling it "altogether wonderful." It looks like del Toro's childhood wish that the monster gets the girl and has a happy ending will come true after all.