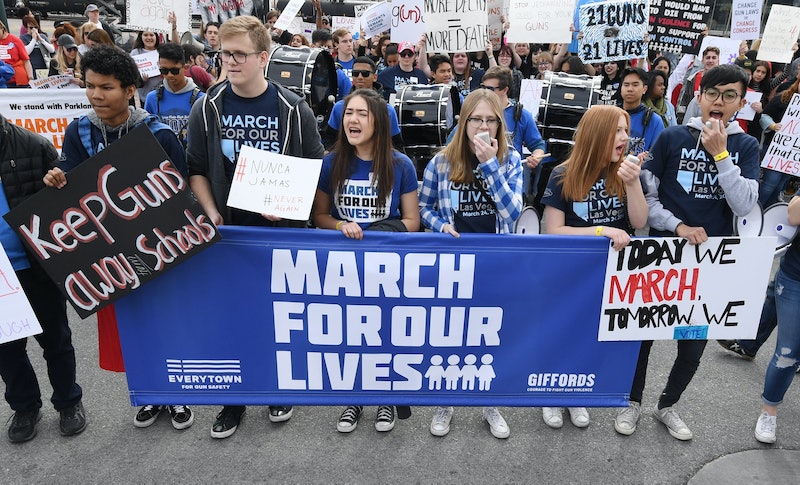 Five months after the Valentine's Day school shooting that launched a wave of gun control activism across the United States, laws passed in the wake of the massacre are having tangible impacts. In Florida, more than 450 people considered to be threats have been ordered to give up their guns since Gov. Rick Scott signed a post-Parkland Florida gun law on March 9, according to local ABC station WFTS. Although some people still oppose the act, state courts and law enforcement are determinedly working together to use the anti-gun violence tool.

Under the Risk Protection Act, Floridians who are considered to pose a threat to themselves or others can be subjected to a court order that allows police to confiscate their guns. The "red flag" law drew national attention in late March when a judge granted one of these orders against the Parkland shooter's brother, who was caught trespassing on the school's campus.

According to WFTS, 467 risk protection cases have been filed throughout the state since the law's passage. In Pinellas County, every one of the 64 cases filed has been granted by a judge. Pinellas County Sheriff Bob Gualtieri told the station that his team has worked to ensure that they're keeping the community safe without violating anyone's rights.

"It's a constitutional right to bear arms," he said. "When you are asking the court to deprive somebody of that right we need to make sure we are making good decisions, right decisions, and the circumstances warrant it."

WFTS toured Gualtieri's office and saw his department's collection of nearly 200 confiscated firearms, which includes rifles, handguns, and assault weapons (including an AK-47 and AR-15, the type of gun used in the Parkland shooting). Of all the "red flag" orders filed across the state so far, around 25 percent have targeted individuals who are licensed to carry concealed firearms. More orders have come from Broward County, home of Parkland, than anywhere else.

Opposition to the law still exists among some. Attorney Kendra Parris has represented several individuals who say they were unfairly targeted by a "red flag" order. She has won at least two cases, both of which involved people who did not yet own guns but would have been temporarily prevented from buying them.

Parris told WFTS that the law "violates the constitution." She argued that it unfairly targets people who are "exercising their first amendment rights online, who are protecting constitutionally protected speech online." One of her clients, for instance, had made multiple statements on the internet that praised mass shooters, which led to a filing against him.

The risk protection order measure is just one of many gun control reforms that was implemented in Florida after Parkland. The March 9 law also raised the minimum age for purchasing firearms to 21, appropriated funds for improving school security and mental health programs in schools, and provided money to arm some teachers, per CNN. Several other states also passed "red flag" laws and additional measures in response to Parkland, according to United Press International.

The passage of these reforms hasn't slowed down gun control activism. In Florida and elsewhere, advocates are pushing for additional measures to be taken as the new school year approaches.

"I think it will be the job of parents as the November election is closer to hold legislators' feet to the fire," Nancy Lawther, president of the Miami-Dade County Council of Parent Teacher Associations, told The Miami Herald this week. "Are children not worth the cost of protection?"