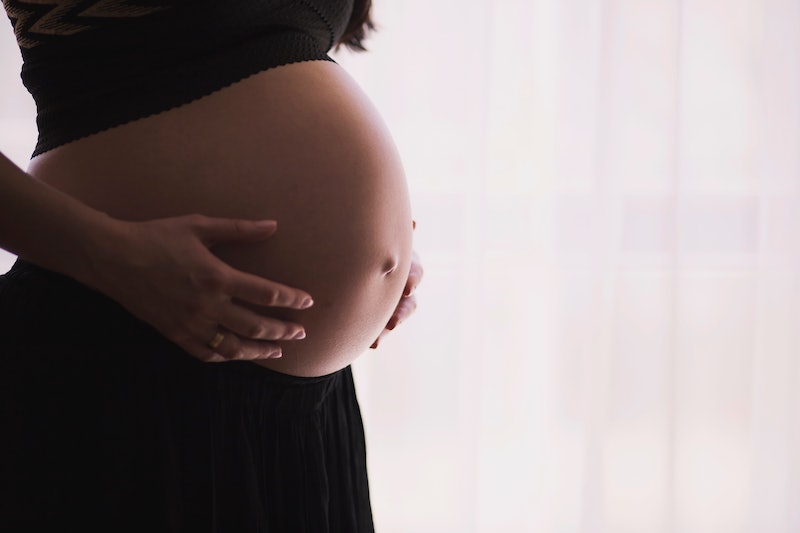 Crop tops are everywhere now that they're back in fashion, but not everyone seems to approve of their midriff-baring nature. Case in point: In a city outside of Seattle, Washington, a pregnant woman claims she was refused service at a restaurant for wearing a crop top. As you can imagine, she was less than enthused about this turn of events. (Bustle has reached out to the restaurant for comment and will update when we hear back; they have Buzz Inn Steakhouse has since released a statement to KIRO 7 apologizing for the incident, saying the server was "by no means... trying to be demeaning" to Gobin.)

On Monday, local news outlet KIRO 7 reported that Charisha Gobin, who is seven months pregnant with twins, was allegedly turned away from a Buzz In Steakhouse in Marysville, Washington. At the time, she was wearing a long skirt and a black crop top. The latter turned out to be a source of controversy when an employee told Gobin that the shirt violated the restaurant's "no shoes, no shirt, no service" policy, which is tied to health code regulations. As a result, she was denied service. Later, the employee told KIRO 7 off-camera that the top didn't cover enough to count as a shirt.

Gobin and her family managed to find dinner elsewhere that night, but she remained outraged. Afterward, she posted a photo of her outfit on Facebook, along with a caption stating she had been turned away for "violating the health code." The post has since been deleted, but she told CBS News that she felt she was targeted for daring to show her pregnant stomach, calling the situation "pretty ridiculous."

"Had it been anyone else, I don't think there would've been any problem whatsoever," she said, according to the station.

“Statement: We sincerely apologize for the misunderstanding and will cover with all staff as to how to not overly enforce a rule that is intended to make all guests feel comfortable," Buzz Inn Restaurant shared with KIRO 7 over Twitter. "Our apologies for the misunderstanding. The server in question has been with our company and a great employee for almost 20 years and was trying to use her best judgement and by no means was trying to be demeaning to the guest again our sincere apology for misunderstanding.”

It's no secret that dress codes often target women, forcing them to cover up in ways that aren't required of men. Instances of this inequality pop up frequently in the news: This spring, a Florida high school was roundly condemned for its prom dress code, which banned slits and low-backed dresses. Before that, two girls were prevented from boarding a United flight for wearing leggings. Meanwhile, pregnant women are often told to hide their bodies — just look at the comments below a pregnant bikini picture on Instagram. Last month, a news anchor was left a voicemail telling her to buy "decent maternity clothes" because her body was "disgusting."

This bullying is so common that there's a phrase to describe it: body-shaming. The good news is that Gobin doesn't appear to be letting her own experience with body-shaming cramp her crop top style, and the reaction on social media has been largely supportive. The being said, there's clearly a long way to go before women's bodies are truly their own business.

More like this
TikTok’s “5-9 Routine” Trend Is Here To Boost Your Productivity
By Courtney Young
What Is "The Ick?" The TikTok Dating Term, Explained
By Courtney Young
18 Games Like Wordle To Play Online
By Kaitlyn Wylde and Emma Carey
How To Make The Grinder Sandwich TikTok Is Obsessed With
By Emma Garza
Get Even More From Bustle — Sign Up For The Newsletter