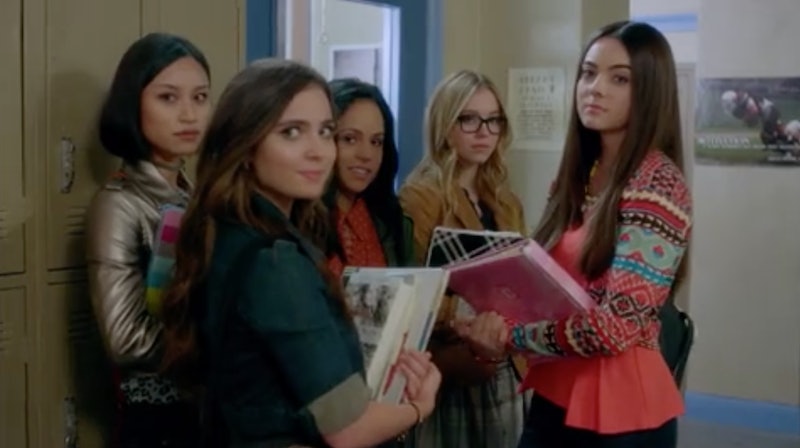 Now that your heart has finally stopped racing from all the twists and turns of Pretty Little Liars' final installment, let's talk nuts and bolts. There's a good change that a Pretty Little Liars spin-off based on that final scene might be in the works — or, at least, that's a good assumption to be making right now. After all, the Season 7 Addison storyline would be weird as a stand-alone narrative.

For those who skipped some of the series, we got to see a mini-Alison with an eerily similar-sounding name wreak disaster at high school, much like Rosewood's most disturbing blonde once did. She attempted to blackmail her swim coach Emily, she appeared to have planted a doll with a knife in its chest in the locker of a deaf student, and she even drops a homophobic slur after Alison reprimands her in English class.

Which brings us to the final scene, in which we basically get a carbon copy of the show’s beginning but with a new cast: one girl wakes up at a sleepover to find Addison gone and another of the group claims to have heard her scream. That raised some questions. Has the brunette been kidnapped, just like we initially assumed Ali had been? Or has she disappeared because she feared for her life?

In terms of structure, it seems like a big clue that the producers have chosen to end the show not on the original Liars' happy goodbyes, which tie all of the primary storylines up in a neat bow, but on this group of girls waking up to a whole new mystery. Why end on a beginning unless you're going to leverage the ambiguous ending into a new series?

But that's not all. Every installment of the show starts with a run down of past scenes that are relevant to the action contained in that episode. As such, the fact that the final episode of the show opened on a flashback to Addison threatening Emily would be really freaking weird in any context other than a spin-off. After all, the bully isn't so significant in terms of the action of "Til DeAth Do Us PArt." We only get one scene she's actually in, though there are two more in which she's discussed.

And her name, Addison Derringer, just happens to boast the same initials as Alex Drake, making her another candidate for A.D. If this is the last we see of the new girl gang, then the teenager's only function was to pose as a red herring. That feels a little cheap for a showrunner of I. Marlene King's caliber.

If you've still got doubts, bear in mind that King told Entertainment Weekly in June that a Pretty Little Liars spin off is "definitely a possibility." She said:

"It's not a for sure thing, but there's some ideas swirling around out there. Everybody knows I love this world. I love to play in this world and I love these characters, so it would be fun to keep a few of them moving forward in their lives."

Given how positive the above sounds and the lack of "buts" aside from its certainty, it sounds as if King's courting offers for a spin-off. And with the winter premiere of Season 4 becoming the "most tweeted premiere" in TV history, according to Mic, and with the Rosewood-set series being ABC's most popular show of the same year, she's going to get an offer, right? Right. We haven't seen the last of Rosewood yet.