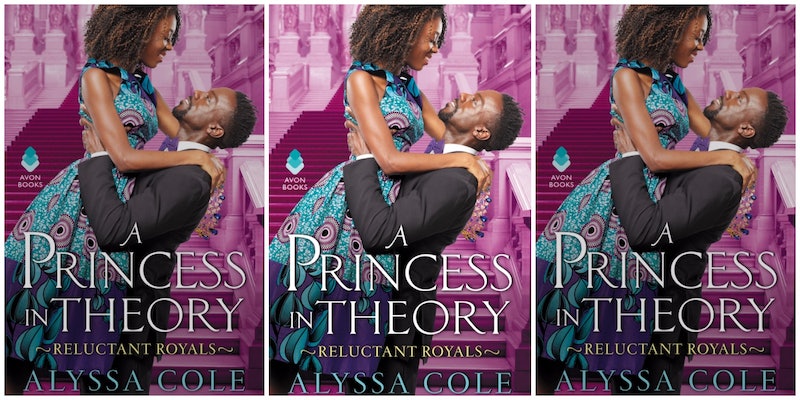 Although rumors had been circulating for months (well, basically since Prince Harry and Meghan Markle were spotted together, to be honest), this week's announcement by Kensington Palace that there was, indeed, a royal wedding on the horizon sent a palpable surge of joy through the internet. The news has been dismal and disappointing lately, and people were elated to finally have something to be happy about. It was more than that, though. Meghan Markle is a talented actress and businesswoman, which are feats that stand well enough on their own, but there's something moving and validating about knowing that she'll soon be royalty. She symbolizes a childhood fantasy come to reality — a commoner marrying a prince! And the fact that she's a woman of color blows the gates right off of that fantasy, which once seemed to be something only certain people could entertain, even in their imaginations.

As someone currently writing a royalty romance series featuring women of color, I've given some thought to just what life would be like for a commoner suddenly thrust into the royal spotlight. In this excerpt from A Princess in Theory, book one of The Reluctant Royals series, our heroine Naledi Smith — broke grad student and juggler of multiple jobs — gets her first taste of what it really means to be betrothed to Prince Thabiso...

Thabiso moved toward Ledi, and although the first step was one of uncertainty, the next brought him closer to her, and there was assuredly nothing he wanted more than that. He knew that she knew he was approaching, although she kept her attention on a little girl who had grabbed her by the hand and gazed up adoringly.

“Welcome home, my dear Naledi,” he said as he approached, his voice almost drowned out by the children’s chorus that had begun to sing their national anthem. She finally turned to him.

“Oh hi, dear,” she said with a wry smile. “Nice crown.” He touched the ring of platinum encircling his head. He’d forgotten it was there, even though it was supposed to serve as a constant reminder, like a wedding band.

He shrugged. “Oh this old thing? This is my casual crown. The formal one is eight inches tall.”

She wrinkled her nose.

“We Moshoeshoes are not known for our subtlety,” he said.

The girl darted back into the crowd when Thabiso addressed her, hiding behind her mother’s long patterned skirt.

“She is also underdressed,” Ledi said through chattering teeth. “Isn’t it supposed to be hot in Africa?”

He could see her shivering; she was still dressed for spring in the Northern Hemisphere, not winter in the Southern. He removed his thick wool cloak and wrapped it around her. A gasp went through the crowd. Sharing one’s cloak was an act of intimacy; it was like sharing your second skin. As he pulled the collar closed, he noticed the thin, serpentine metal glinting against her collarbone.

What did it mean that she still wore his gift? Hope, stronger than the logic that told him nothing could bring Ledi back to him, spread in his chest like one of the great winged creatures said to serve Ingoka’s will.

He inhaled deeply as he tucked the collar of the cloak and fixed it in place with a button. “It is hot on some parts of the continent. Your current location is fifteen hundred feet above sea level, nestled in the mountains, and it is winter. It’s ski season here.”

Thabiso wondered how Naledi, lover of data, had been remiss in reading up on the local climate. He was sure Likotsi would have informed her in one of her emails, but then he remembered how Naledi ignored that which caused her emotional discomfort.

“Are you ready to meet your people?”

“I guess.” She was looking down at her sneakers. He held his hand out, and when she took it warily, he tugged her toward him, gently folding her arm under his so that she was pressed against him along one side.

“Mother, Father, esteemed citizens of Thesolo, and our guests. I present to you my future wife, and your future queen: Naledi Ajoua.” Polite clapping broke out from the crowds that had gathered to witness this historic event. He felt Ledi stiffen beside him. “Although she is one of us, it has been many years since her feet touched this sacred soil. The people of Thesolo are world renowned for their kindness and hospitality, and I have no doubt you will help show her just how wonderful her homeland—our homeland—truly is.”