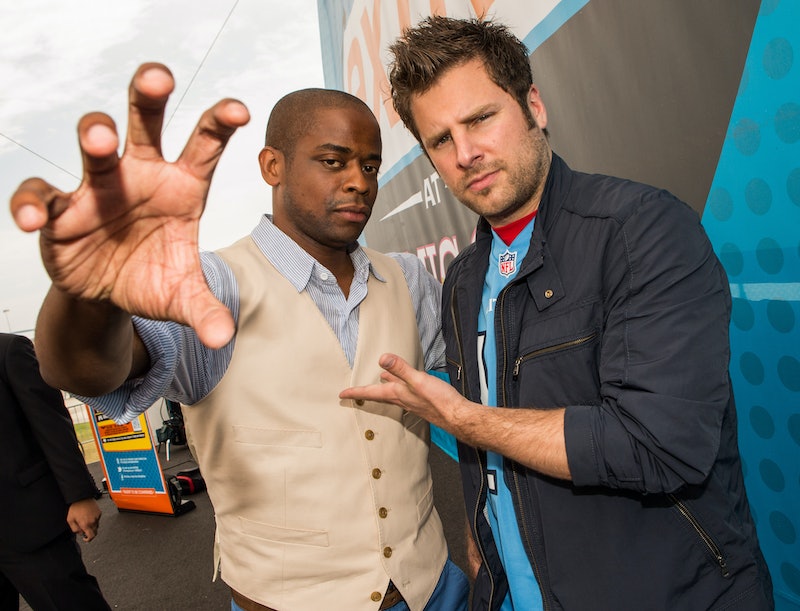 Fist bumps all around: USA Network just greenlit a sequel to Psych: The Movie, and there's plenty to be, well, psyched about. On the heels of the 2017 reunion flick, the two-hour follow-up — aptly titled Psych: The Movie 2, per TVLine — will, of course, mark the return of both Shawn and Gus, played by James Roday and Dulé Hill, both of whom starred in the original USA detective comedy, which ran for eight seasons from 2006-2014.

After the news broke, Hill enthusiastically tweeted (along with several heart, hand, and, of course, pineapple emojis): "Well PsychOs! Have you checked out @TVLine’s announcement?!! #CmonSon!!! Let’s do it again @Psych_USA!! Whaaaaaaat!! #PsychTheMovie #PsychTheMovie2 #Psych" (For his part, Roday reacted to the announcement with a comparatively more subdued, "Don't say I didn't warn you.....")

The part that really made fans say, "What?!' however, is that Timothy Omundson (AKA Carlton Lassiter) will be a central part of this particular project. For anyone who's unaware, Omundson suffered a stroke shortly before production began on the first Psych TV movie, resulting in massive rewrites. Fortunately, the actor recovered in time to film a short cameo (via a FaceTime call) — but, naturally, fans were left wanting much more.

Not only will the storyline be "Lassie-centric," Psych: The Movie 2 — slated to begin production next month in Vancouver for a late 2019 premiere — will also pay homage to the original TV series, with Shawn and Gus returning to Santa Barbara, where it all began.

"Santa Barbara Police Chief Carlton Lassiter (Timothy Omundson) is ambushed on the job and left for dead. In a vintage Psych-style Hitchcockian nod, he begins to see impossible happenings around his recovery clinic. Shawn (Roday) and Gus (Hill) return to Lassie’s side in Santa Barbara and are forced to navigate the personal, the professional, and possibly the supernatural. Separated from their new lives in San Francisco, our heroes find themselves unwelcome in their old stomping grounds as they secretly untangle a twisted case without the benefit of the police, their loved ones, or the quality sourdough bakeries of the Bay Area. What they uncover will change the course of their relationships forever."

Back in 2017, Psych creator Steve Franks did, in fact, promise fans in an interview with Entertainment Weekly that Omundson would return in any potential follow-up.

“There’s some great, great stuff that took place in Santa Barbara, and movie two is certainly going to utilize some of those bits. The entire scenes, word-for-word, will be in the second movie,” Franks told EW at the time. “The idea is that the second one would be the one that we would do to fully have everybody back together in the same room at the same time.”

The website also noted that the sequel was originally slated to film last summer but was put on hold, given the fact that Roday was busy filming ABC's A Million Little Things, and Hill was tied up with USA's Suits. Roday, for one, believed it would all work out in the end.

“We’ll figure out a way to do it,” he told reporters at the Television Critics Association press tour in August, per TVLine. “All the pieces are still there, and everyone wants to do it. We’ve got to get Omundson back to his Psychos.”

Luckily, he was correct, and all of those Psych fans will have plenty of laughs to look forward to later this year.