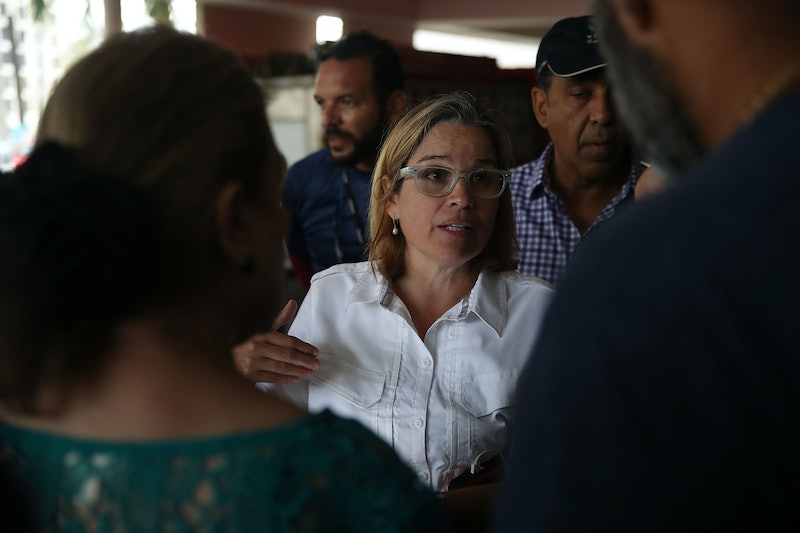 As Puerto Rico struggles to heal from Hurricane Maria's stunning devastation, San Juan mayor criticized FEMA after hospitals reportedly lost power. Carmen Yulín Cruz tweeted on Sunday, urging FEMA to provide more aid and reminding the agency that Puerto Ricans are Americans, too. Bustle has reached out to FEMA for comment and will update if they respond.

The federal government has come under scrutiny after reports have accused the agency for being sluggish or negligent with its efforts to bring Puerto Rico back on its feet. In one recent report, FEMA recently removed (and later on restored) two key statistics on drinkable water and electricity access regarding post-Maria Puerto Rico. The essential data was erased from the website on Thursday but reinstated on Friday. According to The Washington Post, FEMA spokesman William Booher did not explain why those metrics were temporarily absent from the federal agency's website.

Instead of taking Cruz's criticism head-on and possibly offering an expedited recovery process, FEMA has adopted a "filter out" approach according to its administrator, Brock Long. Long responded to Cruz's slam-down on Sunday and said, "We filtered out the mayor a long time ago. We don’t have time for the political noise."

Brock went on, "As far as the political noise, we filter that out, keep our heads down and continue to make progress and push forward restoring essential functions for Puerto Rico."

Observers, however, have been critical of FEMA and claim that the agency has been slower to respond to Puerto Rico's pain compared to mainland states where other Atlantic season hurricanes have also caused considerable damage, including an estimated $150 billion in collective structural damages.

Among one of the most recurring complaints is the apparent lack of a full disaster response from FEMA. As of Tuesday, FEMA has not yet authorized a full disaster response for Puerto Rico, which is unfortunately in dire need of the very same operation. A Sunday update from Gov. Ricardo Rossello of Puerto Rico didn't specify either what the current response level is from FEMA. Bustle has reached out to the agency's media cell for comment and will update accordingly.

At this moment, only about 11 percent of the region's electrical grid is in shape while more than half of its local population lacks access to drinkable water. A full disaster response would wholesomely address Cruz's Sunday complaints regarding power outages and collapses, especially in the precarious cases of hospitals where the lives of thousands of vulnerable patients are already at risk. An extensive disaster response, as opposed to a major disaster response, would tackle both desperate needs by providing financial and material-based aid.

Extensive aid for structural repairs hasn't yet reached parts of Puerto Rico's powerless grids. And that's for a rather distressing reason. In order for extensive and full-disaster level aid to reach Puerto Rico, FEMA will have to submit an official request to president Donald Trump. This is otherwise known as the Stafford Act which is related to the approval that the agency needs to send out provisions for relief. According to Vox, FEMA officially submitted a request to authorize full scale response on Tuesday but since then, it hasn't reported any updates.

Cruz's criticism on Sunday may upset those who think that FEMA is doing enough for Puerto Rico but a customary glance at the financial assets of the agency tells us that it could be doing a whole lot more.