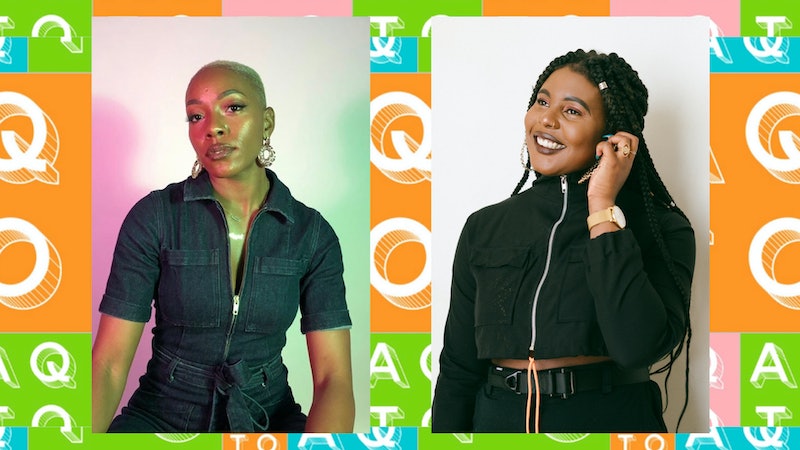 Chanté Joseph & Tobi Kyeremateng will both be a part of the 'A Quick Ting On' series / Credit: Derrick Kakembo & Caleb Femi
By Niellah Arboine
Oct. 2, 2019

What better way to begin Black History Month than with the announcement of a book series celebrating black British life? A Quick Ting On, created and produced by publisher Magdalene Abraha and written by some of the country’s brightest young talents, aims to give people insight into black British life and culture through a selection of works focused on afros, black British business, grime, theatre, the black British power movement, plantain, and bamboo earrings. Not only are all the authors involved under 30, but this will be all of their debut books.

The A Quick Ting On (AQTO) writers are made up of Tskenya-Sarah Frazer, founder of TSKENYA footwear (who will be writing AQTO: Black British Businesses), journalist Franklyn Addo (Grime Music), model and advertising creative Sophia Tassew (Bamboo Earrings), journalist and curator Christian Adofo (Afrobeats), writer and illustrator Rui Da Silva (Plantain), and mathematician and founding member of gal-dem, Zainab Kwaw-Swanzy (The Black Girl Afro). As well as writer Chanté Joseph and theatre producer Tobi Kyeremateng, who I spoke to about their involvement with AQTO.

Joseph, who writes for the likes of Crack magazine and the Independent, will be penning AQTO: The Black British Power Movement, and she believes this series will be one of a kind. “There’s nothing out there all at one time telling all of these stories but also from young black writers who haven’t written before,” she tells me. The publishing industry can be a difficult space to navigate, but for Joseph, this project “doesn't feel exploitative ... this is real and authentic and everyone has an interest."

And, as this is will be all of the authors' first foray into book publishing, it’s proving “you don’t need to be old and white or work in publishing — you can just be young, interesting with something to say,” as Joseph puts it. Which is something that resonates Kyeremateng also. Kyeremateng will be writing AQTO: Theatre Sh*t. “None of us thought we would be writing books," she says. Kyeremateng tells me she initially said no when Magdalene first asked her. "Yet here I am!" she laughs. But each person is an expert in their field, she explains. “It makes sense — the things that we’re writing about are things that we are active in.”

Joseph's book will be diving into important individuals, events, and politics from the '60s onwards, and "really understanding why this movement came about" she says. Joseph remembers going to a book club discussion event where “one of the questions was, ‘do black people in Britain have power?’ And everyone was like ‘no.’” She continues: “There are so many things I don't know myself, but what I do know is those that came before us were doing bits! My book is literally about recognising the story and the struggle of those that came before us and detailing it.”

For Kyeremateng, AQTO acts as an archive, “solidifying not only previous black British history that hasn’t been able to be documented, but also this contemporary renaissance we’re going through at the moment.” Her book will be bringing theatre, especially that from the last five to ten years, into the black British cultural conversation. "Theatre always gets left out of the cultural cannon when it comes to entertainment." But Kyeremateng believes "that's the fault of theatre, that’s not our fault. I really want to open up what we think theatre is — and the idea that black British communities have been performing theatre for a long, long time, whether we recognise it as theatre or not."

Joseph puts it best when she says: “It’s just all the right things coming together at the right time.” The books are set to launch in October 2020, just in time next year's Black History Month.