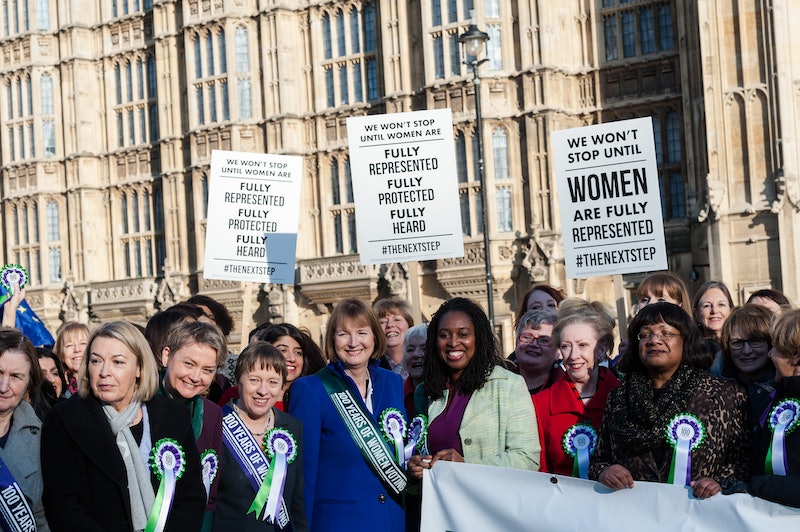 According to new figures, the Dec. 12 general election will see a record number of women standing for the role of MP. Per the Independent, 34 percent of the total candidates are women with 1,120 women registering for the 2019 date. This is thankfully an increase on the 2017 election which saw women make up only 29 percent of candidates.

But, as Sam Smethers, chief executive of the Fawcett Society, told the Guardian, this isn't exactly reason to celebrate. “We need a step change in women’s representation. These figures won’t deliver that," she said. "Rather than celebrating, I think that most parties should be asking themselves why they haven’t selected more women. It’s the best chance they had in years to select significantly more women and they blew it."

Smethers is likely referring to individual party figures that show a wide gender discrepancy in the nation's political leanings. For example, reports the Guardian, Labour has become the first major party to choose a majority of female candidates (53 percent are women). The Conservatives' female candidates, however, constitute only 30 percent of the total.

Other parties are doing considerably better; some are worse. The Liberal Democrats are similar to the Conservatives with women making up 31 percent of candidate figures, reports the Independent. But the Green party's candidate list boasts 41 percent women. The Brexit party is among the lowest, per the Guardian, with only a fifth of candidates women.

The 50:50 Parliament campaign points out that male MPs currently outnumber female politicians two to one. Just under a third of MPs are women, according to a government briefing, meaning the UK comes 39th in the list of countries with a gender-proportionate lower house of Parliament.

Despite the small increase being somewhat disappointing, it's heartening to see that a number of women haven't been put off from standing. Recent news revealed that a flurry of female MPs would be stepping down from their posts. Several mentioned public abuse as one of the reasons.

Only 18 of the 50 MPs standing down at the next election are women, per the BBC, but this is still disproportionate. As the Guardian explains, the number of "retiring MPs usually reflect historical intakes." The number of women stepping down should therefore be lower. Instead, some are leaving their job a decade earlier than their male equivalents.

It seems this conversation will continue until an equal number of women and men are elected and until female politicians receive equal treatment. And rightfully so.