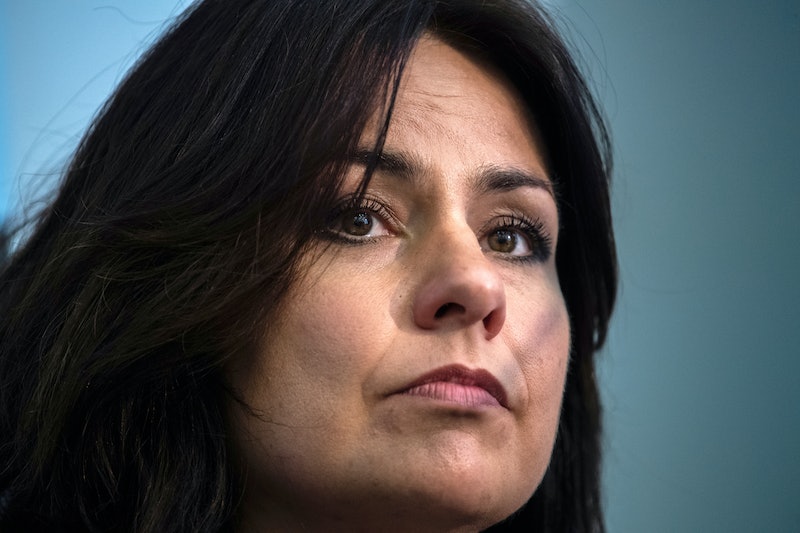 "Nobody in any job should have to put up with threats, aggressive emails, being shouted at in the street, sworn at on social media, nor have to install panic alarms at home," wrote MP Heidi Allen in a letter explaining why she won't be standing for Parliament in the next election. But this behaviour has become commonplace in the lives of female MPs across the UK, and it's frightening to think that Brexit could be dampening women's political career aspirations.

Allen — who quit the Conservative party in February, briefly leading Change UK before joining the Liberal Democrats — distinctly blamed Brexit for the decision, saying it "has broken our politics." In August, per the BBC, a 59-year-old man was jailed for 24 weeks for sending threatening messages and posting aerial photos of Allen's home online.

In court, Allen admitted to feeling scared to go outside in her local area and had even stopped jogging. "If people are too frightened, too intimidated, to stand as MPs then the quality of public life is significantly undermined," said the judge, calling such abuse "a profound attack on democracy."

Since 1918, there have been fewer than 500 female MPs, reports ITV. Compare that to the 4,503 men who have won a seat in Parliament, and the scale of the political gender gap becomes clear. As the Guardian states, around a third of MPs and councillors are women. And while the summer of 2015 saw women leading five of the UK's main political parties, albeit some briefly, female underrepresentation may be worsened by Brexit-related abuse.

One recent parliamentary debate to heighten the torrent of vitriol directed at female politicians surrounded Boris Johnson's use of language. Labour MP Paula Sherriff told the prime minister, per the Guardian, that words such as "betrayal" and "surrender" were used in death threats sent to MPs. He called the claim "humbug", later telling the BBC: "I totally deplore any threats to anybody, particularly female MPs."

But the heated discussion, according to the Financial Times, led to Sherriff receiving more than 100 "toxic tweets" an hour. She told the Guardian abuse "started with the referendum." Other MPs to speak to the paper included Labour's Tulip Siddiq, who explained how women of colour were facing racist abuse: "You are not just a ‘traitor’, you are a ‘coloured traitor’. It’s not just about ‘betraying’ the country, it’s about ‘betraying the country that gave you a safe home.’ And then the old chestnut ‘go home’; ‘If you’re not going to deliver Brexit, go home.'"

Liberal Democrat politician Luciana Berger told the Guardian six people had been convicted "for harassment and threats" toward her with "more cases in the pipeline." And at the end of September, reports the BBC, Labour MP Jess Phillips had police called to her house three times in just one weekend.

The impact on women MPs cannot be understated. Back in February, the Times revealed that female politicians had been forced to hire bodyguards, move house, and even change their voting stance. Earlier this month, CNN reported that daily routines now involved carrying panic alarms and taking taxis home, instead of walking or using public transport. It also takes a psychological toll. As Labour's Diane Abbott, who in a 2017 Amnesty International poll was found to have received the most abuse of any female MP during the 2017 general election, told the charity: "Online abuse does damage you, it damages your confidence and it corrodes your self-esteem."

With Brexit pushed back even further and a general election looming, online extremity is poised to rise. Its current level is already thought to be some of the worst in political history. "I have never experienced anything like the last few years," Dame Caroline Spelman, a Conservative MP of 22 years who intends to stand down at the next election, told the BBC.

In an interview with the Yorkshire Post, Channel 4 news presenter Cathy Newman said some "early female MPs got an appalling amount of abuse." But she felt things were worse now, adding: “We have actually gone backwards. It is very toxic at the moment and it is very frightening for MPs.”

After the murder of Labour MP Jo Cox in 2016, concerns aren't unfounded. "I'm not scared of an election, I am scared I might be hurt or killed," Phillips recently tweeted.

The 2017 early general election — another period of political turmoil in the UK — saw an extra dose of abuse hurled at female politicians. Before it, a BBC Radio Five Live investigation found a third of women MPs had considered quitting because of abuse. One in six said they wouldn't have stood for Parliament if they could have predicted the threats they would later face.

And, in the six months leading up to the same election, an Amnesty report identified more than 25,000 abusive tweets directed at female MPs. Perhaps unsurprisingly, 35% more of these tweets were aimed at black and Asian politicians than white women. Abbott shockingly received almost half of all Twitter abuse during that period.

Nothing has changed. Women politicians are bearing the brunt of divisive times in the UK, if not more so now than ever before. Listening to their experiences, taking note of their resignations, memorising the unnerving statistics... It'll be a miracle if this doesn't impact the number of women entering politics in the future. The political landscape clearly needs a major overhaul if we're to ensure women can participate in democracy at the highest levels.

More like this
Watch Jacinda Arden’s Devastatingly Honest Resignation Speech
By Sam Ramsden
Pret & Costa’s Coffee Is The Strongest On The High Street, According To Which?
By Sam Ramsden
This Is When Netflix Is Going To Start Charging You For Sharing Passwords
By Darshita Goyal
Twitter Has *A Lot* To Say About The "Single Penalty”
By Sam Ramsden
Get The Very Best Of Bustle/UK
Sign up for Bustle UK's twice-weekly newsletter, featuring the latest must-watch TV, moving personal stories, and expert advice on the hottest viral buys.