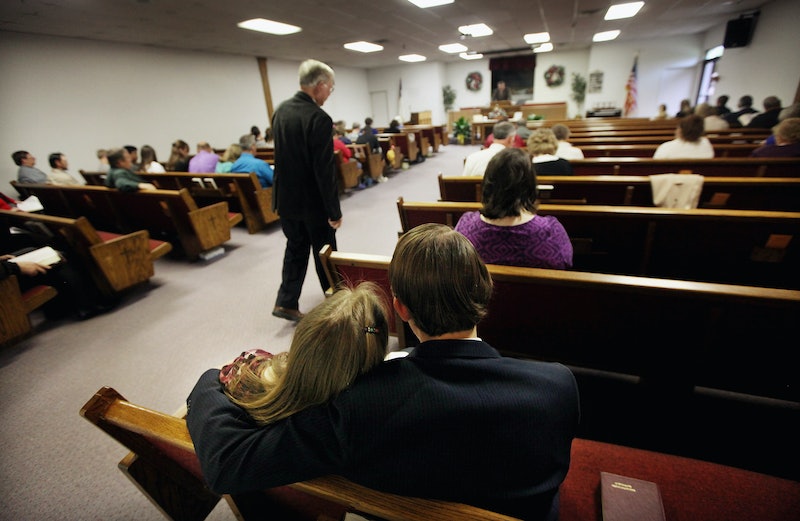 According to an investigation by the Houston Chronicle and San Antonio Express-News, over 200 employees or volunteers at Southern Baptist Convention churches were convicted of sex crimes or pleaded guilty to them in the last 10 years. More than 700 people have reported being abused by church workers since 1998, and dozens of the accused have been able to find jobs at Southern Baptist churches, the Chronicle and Express-News report.

In total, around 380 Southern Baptist ministers, deacons, youth pastors and others have been accused of sexual misconduct in the last 20 years, the Chronicle and Express-News report. Over 250 were charged, around 220 either pleaded guilty or were convicted, and nearly 100 of them are in prison today. There were more accused of sexual misconduct who worked in Texas than any other state, according to the Chronicle and Express-News' review of court records and newspaper articles from that time. Bustle has reached out to the Southern Baptist Convention for comment.

As part of its report, the two newspapers compiled a database of convicted sexual predators in the Southern Baptist church — a measure that, according to the newspapers, the church itself refused to to do despite requests from alleged survivors.

Since 1998, at least 10 Southern Baptist churches employed, or provided volunteer opportunities to, members who had been charged with sex crimes, the newspapers report. At least 35 accused sexual predators were able to find work at churches after their accusations.

In Illinois, a pastor who was convicted on two counts of sexually assaulting a 16-year-old was allowed to preach at multiple Southern Baptist churches after serving his prison sentence, according to the two newspapers. In Houston, a minister who was convicted of sexually assaulting a teenager started his own congregation and a non-profit, called Touching the Future Today, both of which he still leads, the Chronicle and News-Express report.

Several members told the two newspapers that the church was aware that sexual predators were in positions of leadership, but repeatedly rejected attempts to institute reforms.

Debbie Vasquez, who says she was molested by her Southern Baptist pastor when she was 14 and impregnated by him four years later, and others, reportedly suggested that the church's leadership compile a database of abuse allegations and take action against churches accused of harboring sexual predators. Nearly all of her proposals were rejected, the Chronicle and Express-News report.

Wade Burleson, formerly the president of Oklahoma's Southern Baptist convention, told the newspapers that he, too, pleaded unsuccessfully with church elders to take preventative measures against sexual abuse. Burleson says that in 2007 and then again in 2018, he asked church leaders to vote on such reforms at their annual meeting, and was rebuked both times.

Rev. Thomas Doyle, a Catholic priest who blew the whistle on sexual abuse in that church in the 1980s, says that he wrote to Southern Baptist leadership around 2007 bringing their attention to sexual predators in the church and imploring them to take action. In a letter to Doyle obtained by the Chronicle and Express-News, the church's president responded that "we are taking this issue seriously," but that "we do have some serious limitations due to the polity of our convention."

"While Catholic bishops did claim to have 'no authority' [during that church's sex abuse scandal], Southern Baptist leaders truly have no authority over the local church," then-President Frank Page wrote. Page resigned as president in 2018 for having what the church called "a morally inappropriate relationship in the recent past."

Several church leaders cited local church autonomy while rebuffing requests to reform the church's policies on sexual predators, but as the newspapers note, the church has ended its affiliation with four local churches over the last 10 years for "affirming or endorsing homosexual behavior."

Doyle told the Chronicle and Express-News that the church leadership is afraid, and that this is justified.

"I understand the fear, because it's going to make the leadership look bad," Doyle told the newspapers. "Well, they are bad, and they should look bad. Because they have ignored this issue."