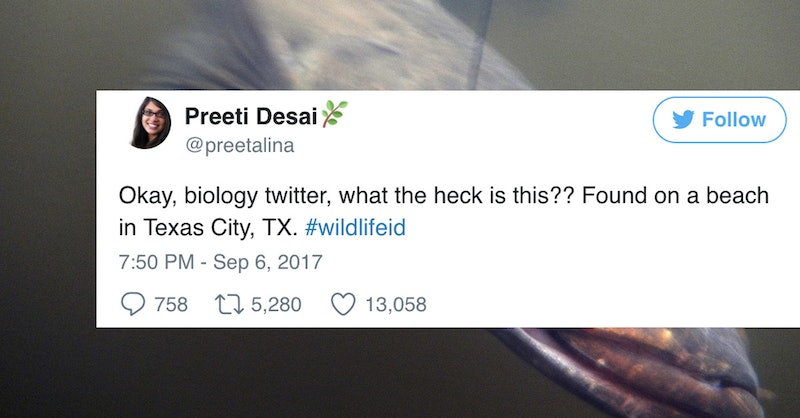 When Hurricane Harvey slammed into the Texas Gulf Coast in August, it brought with it heavy rains, violent winds, and destructive storm surge. However, in assessing the full extent of Hurricane Harvey's impact it appears the storm brought something mysterious and more than a little weird to one Texas town. A bizarre sea creature seemingly pulled straight from the starring role in a science fiction horror flick was found decaying on a beach in Texas in the aftermath of Hurricane Harvey. But what exactly is the fanged and faceless sea creature Hurricane Harvey brought ashore in Texas?

Pictures of the mysterious creature were first posted to Twitter by Preeti Desai, the National Audubon Society's social media manager, along with a simple quarry: "What the heck is this??"

"It was completely unexpected," Desai told the BBC about her find. "It's not something that you'd typically see on a beach. I thought it could be something from the deep sea that might have washed on to shore."

Desai was reportedly with conservationists working to assess damage from Hurricane Harvey when they stumbled upon the sea creature washed ashore on a beach a little over a week ago. In her tweet, Desai said the creature had been found on a beach in Texas City, Texas, and added the hashtag #wildlifeID in hopes biologists or other scientists on Twitter might be able to shed some light on the mysterious find.

"I follow a lot of scientists and researchers," Desai told the BBC, explaining why she'd decided to ask Twitter for help identifying the creature. "There's such a great community of these folks that are very helpful, especially when it comes to answering questions about the world or identifying animals and plants."

Indeed, it wasn't long before Twitter had churned up a few answers — some being more possible than others. "Looks like the monsters in Tremors," one Twitter user quipped.

"Hard to tell given position and decomposition, but teeth and body shape makes me think some kind of eel," another user suggested.

The creature is indeed believed to be an eel, but not one belonging to the Moray or Shrimp eel families. According to Earth Touch News, several experts believe the mysterious creature to be a member of the Ophichthidae family, known more commonly as snake eels. More specifically, Smithsonian National Museum of Natural History biologist Dr. Kenneth Tighe, who is also an eel specialist, told Earth Touch News he believes the creature was an Aplatophis chauliodus. Granted the species' aliases — fangtooth snake eel and "tusky" eel — are more likely to induce nightmares.

According to the global fish species database FishBase.com, fangtooth snake eels live at a depth of between 33 to 91 meters. Male fangtooth snake eels can reportedly grow to a maximum length of 33 inches. They're believed to be permanent or semi-permanent burrow dwellers, leaving just their eyes and snout exposed to allow them to quickly dart out of their burrow to catch and eat bony fish and crustaceans.

Of course, it's possible the eel is being misidentified. Even Tighe noted the creature might be a member of the Congridae eel family. "It might be Bathyuroconger vicinus or Xenomystax congroides," Tighe told Earth Touch News. "All three of these species occur off [the cost of] Texas and have large fang-like teeth." According to Tighe, a clearer picture of the tip of the eel's tail would have helped scientists determine if it was Ophichthidae or Congroides.

It's also not entirely clear if the eel was brought ashore by Hurricane Harvey — a likely possibility — or merely ventured too close to the shore and got caught up in the tide. Whatever it is, and however it got ashore, it's not exactly a creature you'd want to imagine swimming around in floodwaters.

More like this
The 15 Best Dresses For Hot Weather
By Andrea Gale Boerem
This Wi-Fi-Enabled Pet Feeder & Camera Gave Me Peace Of Mind On An Overnight Trip
By Danielle Calma
This Dog Food Is Not Only Super Healthy For Your Pup, It’s Also Better For The Planet
By A. Graham
If You Have A Dog, Trainers Say These 30 Clever Things Will Genuinely Make Your Life Easier
By Dena Ogden
Get Even More From Bustle — Sign Up For The Newsletter