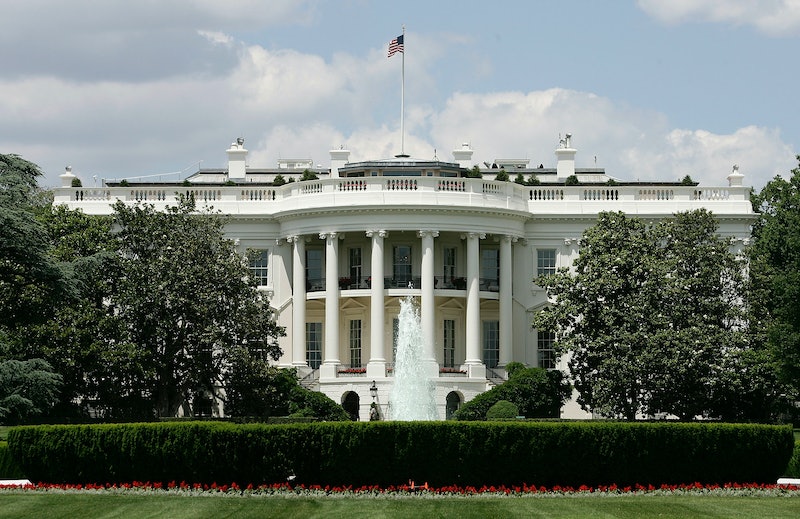 According to the American Civil Liberties Union (ACLU) on Tuesday, the Department of Homeland Security (DHS) recently revealed details about the Secret Service's facial recognition technology program meant for areas within and around the White House. Per its official document, which was released on Nov. 28, the DHS calls the measure a "facial recognition pilot" which would be used to "confirm the identity of volunteer Secret Service employees in public spaces" around the White House.

Further in its document, the DHS added that the purpose of the technology would be to ultimately identify "known subjects of interest prior to initial contact with law enforcement." In a statement to Bustle, Secret Service spokesman Mason Brayman says, "For operational security purposes we do not comment on the means and methods of how we conduct our protective operations." Bustle has reached out to the White House for comment.

While the purported purpose of the technology may be to enhance security around the White House premises, not all people trust the idea. In his blogpost, ACLU's senior policy analyst Jay Stanley called the move "another step toward the normalization of facial recognition as a blanket security measure."

Stanley wrote that maintaining and strengthening White House security was a fine plan but this particular kind of technology "crosses an important line by opening the door to the mass, suspicionless scrutiny of Americans on public sidewalks."

The company's facial recognition program called "Rekognition" had forced the Democrats, according to the letter, to have "serious concerns that this type of product has significant accuracy issues, places disproportionate burdens on communities of color, and could stifle Americans' willingness to exercise their First Amendment rights in public."

But while it is in its nascent stages of potentially becoming a regular feature in American life, some major departments in American government already use facial recognition as a security measure. One of them is the United States Customs and Border Protection, which uses similar programs at airport gates for security purposes. And according to the ACLU, the Transportation Security Administration is eyeing similar technology at an even more common level.

ACLU's Stanley contended that facial recognition software used on people in public areas within and around the White House would also go against congressional rules. Stanley wrote that the "Congress has never authorized its use on the public within the United States."

As a result, such software would pose a huge threat to individual privacy if it is taken to the level of public parks and streets, he noted. All of this would be, he wrote, essentially against the expressed permission or consent of the American public.

In its document, the Department of Homeland Security does give some information about the right to privacy Americans have. But how this eventually plays out in and around the White House is yet to be seen.