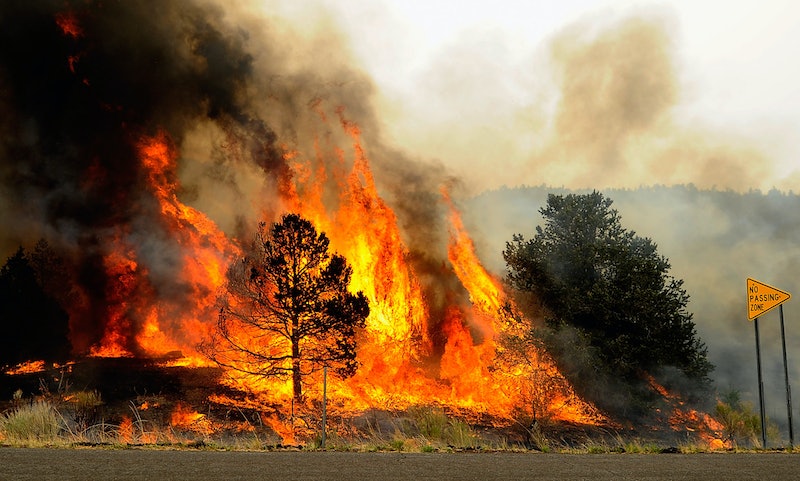 It's official: Sex reveal parties have gone too far. A Border Patrol agent's sex reveal party started a wildfire in southern Arizona last year, and now he may have to pay up to $8.1 million in restitution for his actions. Dennis Dickey — who was off-duty at the time of the party — pleaded guilty to a misdemeanor that ignited the Sawmill Fire in the Coronado National Forest in April 2017, according to a release by the Justice Department.

If a "sex reveal party" is an unfamiliar concept, they're parties or gatherings hosted by a pregnant couple to literally reveal the sex of their unborn child to their family, friends and/or the internet. Typically, they use something blue (balloons, gas, cake filling) for a boy fetus and something pink for a girl fetus.

The Justice Department wrote that on April 23, 2017, the 37-year-old off-duty Border Patrol agent shot a rifle at a target filled with Tannerite, an explosive. Dickey apparently expected the explosive to detonate when hit by a bullet, but it ignited a fire that he "immediately reported" to the proper authorities, according to the Justice Department. The resulting explosion caused a fire that caused more than $8 million in damage and had roughly 600 personnel fighting the blaze, according to The Arizona Republic.

The Justice Department wrote that Dickey's plea includes restitution of $8,188,069 with an initial $100,000 payment and monthly payments moving forward. He also agreed to five years' probation, according to the Republic. However, The Arizona Daily Star — a newspaper that serves Tucson, the largest city near the blaze's ignition — reported that Dickey will only pay $100,000 upon sentencing and monthly payments of $500 totaling $120,000 after 20 years.

"It was a complete accident," Dickey told U.S. Magistrate Judge Leslie A. Bowman in court, according to the Daily Star. "I feel absolutely horrible about it. It was probably one of the worst days of my life."

The Justice Department said the fire damaged more than 45,000 acres. Dickey is scheduled for sentencing on Oct. 9, according to the DOJ.

Dickey’s attorney Sean Chapman told The Arizona Daily Star that Dickey will be borrowing from his retirement fund for the first $100,000. Chapman also told the newspaper that he expected the 37-year-old to keep his position at Border Patrol as Dickey wasn't charged with arson, a willful act.

At the time of the sex reveal-shooting, the Daily Star reported gusting winds as high as 40 miles per hour and there was a fire watch put out by the National Weather Service. This means "conditions are ideal for wildland fire combustion and that there is potential for rapid spread," Green Valley Fire Chief Chuck Wunder told the newspaper in May 2017.

Dickey will be a part of a public service announcement put out by the U.S. Forest Service about his role in the cause of the fire, according to the news release about his plea.

The sex of the baby hasn't been reported yet.