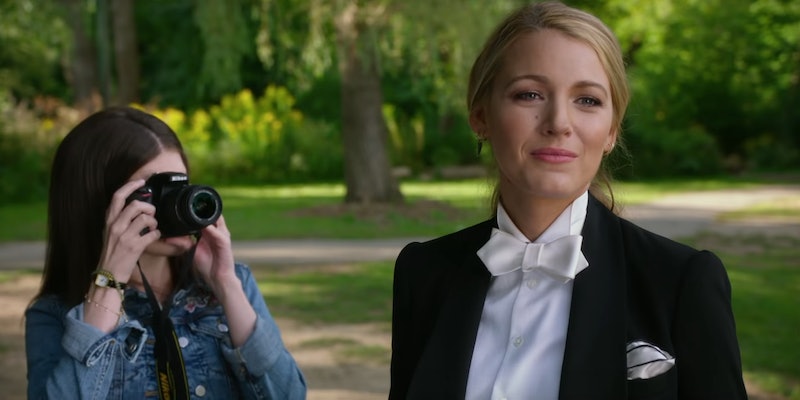 A Simple Favor is a very weird movie. It's far stranger and darker than those vague trailers that keep airing on TV imply. It has so many twists, so much confusion over who to root for, and so much Blake Lively, that it's reminiscent of a certain headband-promoting television show from a few years back. Yep, Gossip Girl fans will enjoy A Simple Favor, because it's sort of like watching a Serena alter ego. And since Gossip Girl actually featured a Serena alter ego at least once, this is really not too much of a stretch.

The trailers for A Simple Favor show that Emily (Blake Lively), the best friend of a mommy vlogger, Stephanie (Anna Kendrick), has gone missing, leaving behind her son and her husband (Henry Golding). Based on the casting of Kendrick and the fact that the director is Paul Feig, A Simple Favor seems like it might be a dark comedy, which is not entirely inaccurate. It's just a lot more bizarre and over-the-top than that genre alone implies. Gossip Girl was considered a teen nighttime soap, and while that's not literally what A Simple Favor is, it actually is pretty fitting if considered a genre.

When comparing the show and movie, visually, the biggest thing they have in common is the fashion. Lively's character, Emily, dresses like if Serena went through a suit phase. Sometimes she wears shirts under them, sometimes she doesn't. Sometimes she wears a dickey and detached cuffs with a waistcoat, looking like a Chippendales dancer. When she needs to be casual, naturally, she wears leather leggings with Louboutin boots. Her friend-turned-person-secretly-investigating-her, Stephanie (Anna Kendrick) even dresses similarly to preppy Blair Waldorf at times. There's even a scene in a graveyard (also very Gossip Girl) in which she wears a giant flower around her neck.

As for the plot similarities, it's twist on twist on twist, and A Simple Favor gives GG a run for its money. Spoilers ahead! Someone had sex with their half-brother.... and he is secretly the father of their child. Someone gets shot... but not really because they are wearing a theatrical blood pack. Someone is being secretly recorded... but — omg! — they cut the wires. There's a secret twin... who ends up murdered. There's wildly inappropriate funeral sex... twice. Remember when Dan and Serena found out they shared a half-brother? A Simple Favor eats storylines like that for breakfast. And do the characters all hook up with each other? You better believe it.

Gossip Girl often left fans with no one to root for because everyone was a liar who did awful things all the time. We even rooted for Chuck and Blair to be together, which in hindsight is beyond messed up. A Simple Favor is similar in this sense. Yes, some of the characters seem worse than others, but no one can be fully trusted, and it's more about figuring out what in the hell is going on than supporting anyone in particular. Both the show and the movie feature people who should just leave each other alone — and literally run away to another state or country in some cases — but who stay involved in each other's lives anyway. Stephanie becoming obsessed about finding out what her "friend" Emily is up to, is exactly what would — and did — happen with Blair and Serena.

Whether you watched Gossip Girl for the impossible-in-real-life drama, the fashion, the unreliable narrators, the shocking reveals, the music, or all the people hooking up with each other, A Simple Favor has you covered in all of these areas, too. Go into A Simple Favor expecting something serious, and you'll be thrown off. Go in expecting a comedy, and that's still not right. Go in expecting a Gossip Girl spinoff movie that asks you to imagine Serena's on her fourth or fifth reinvention of herself, and you'll be spot on.