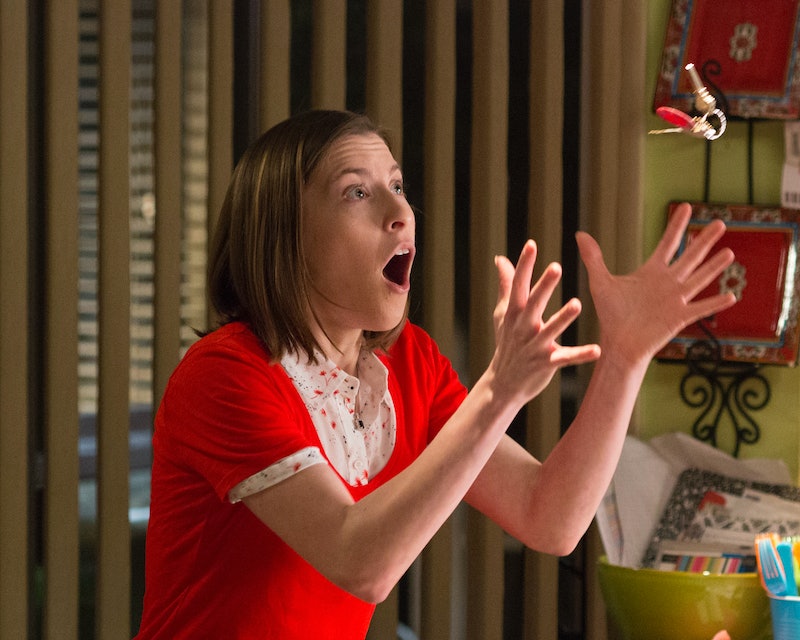 The Middle's middle child is all grown up and reportedly getting her own show. The Wrap reported that The Middle is getting a spin-off starring Eden Sher, who plays Sue Heck. If it's true, it's happy news for those who were sad to say goodbye to The Middle after nine seasons. (Bustle reachd out to Sher's reps for comment, but did not immediately hear back. ABC declined to comment on or confirm the reported spinoff to Bustle.)

The Wrap reports that there are no details known about the spinoff, which is in the early stages of development, other than it will focus on Sue, who is now married to her next-door neighbor Sean Donahue (Beau Wirick) after a flash forward in The Middle series finale. Though, it's unclear if that marriage will factor into the show. Despite all these questions, the spinoff has a fan in The Middle star Patricia Heaton, who played Sue's mom Frankie. "Keep your fingers crossed, @TheMiddle_ABC fans," Heaton tweeted, along with a Variety article about the spinoff. "I would love to see this happen as much as you - I need my Middle fix too!"

It's not a bad time for ABC to announce a new family sitcom being that it just cancelled Roseanne on May 29. The Hollywood Reporter said that ABC is "considering a pilot order" for The Middle spinoff to fill in the Roseanne time slot. It's a smart choice being that after the news of Roseanne's cancellation broke, many couldn't help but mention that The Middle deserved more attention for its honest and funny portrayal of a lower middle class family struggling to get by. Vox went as far to say The Middle was "one of TV’s most underrated working-class sitcoms."

Perhaps, it shouldn't be a surprise since The Middle's creators Eileen Heisler and DeAnn Heline got their start writing on the original Roseanne, which has long been considered the gold standard for shows about working class families.

Before the final episode aired, the creators talked about one day rebooting The Middle with Deadline on May 22. When asked what the future holds for the Heck family, Heisler said, "I can’t tell you what’s next… gotta save it for the reboot. See you in ten years!" It seems the reboot is happening a little sooner than planned and honestly, Sue feels like the obvious choice to keep this show going.

With her optimistic and resilient approach to life, Sue is the one you root for. The final season focused on Sue's junior year of college and her eventual marriage, but clearly, Sue's journey isn't over. Sher's even got her own ideas as to what Sue would be doing post-college.

Last year in an interview with Vulture she said that she thought Sue would move out of Indiana and carve her own path. She said:

"Maybe she’d come back, but I don’t think so. She’d move to a metropolitan area — not New York City, but Madison [Wisconsin] or something similar. She’d get a cool, fun job. She’s in hotel management, so I see her running a little bed and breakfast. A bed and breakfast for preschoolers!"

In that same Vulture interview, Sher said she wished The Middle got more political throughout its run. Specifically, she wishes the show would have tackled the election of Donald Trump. "We’re in a unique position of being this one show that really appeals to everyone regardless of your political beliefs," Sher said. "I think it would’ve been good, at least in a subtle way, to hint at some kind of political change."

She later added, "I’ll say that if it were my show, I would’ve hinted towards some political opinion. Or at least start a discussion." And if she does become the star of her own show, she could finally have that chance to be part of a show that does tackle politics in a real way.

For those that were already missing Sue Heck, you might not have to much longer. Even better, this Middle spinoff might delve into issues that Sher and many others wish it would have all along.