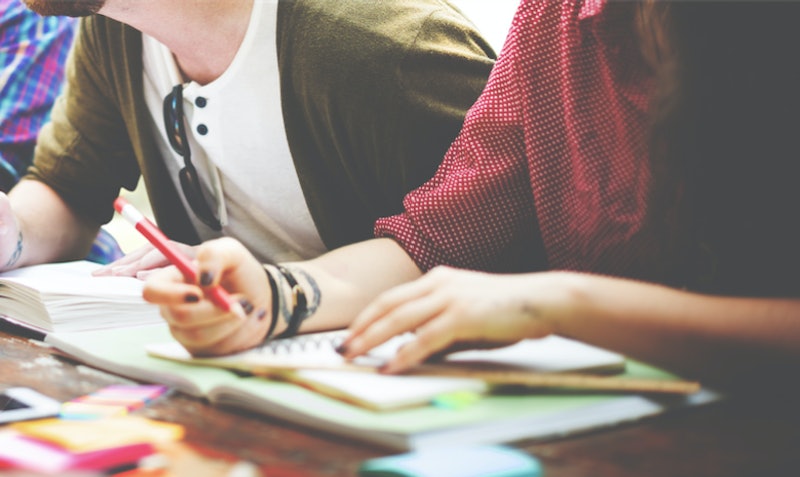 Failing an assignment that you worked hard on is very frustrating, but usually, you can figure out where you went wrong. Even more frustrating is failing when you know you deserved a better grade — especially when it's your teacher who is in the wrong. That's what reportedly happened to Ashley Arnold, a 27-year-old student from Idaho Falls, Idaho. Speaking to BuzzFeed News, she claims that she failed an assignment because her professor believed that Australia isn't a country. (Bustle has reached out to Southern New Hampshire University, and will update upon response.)

Southern New Hampshire University acknowledged the incident in a tweet posted to its Twitter page on Friday: "We deeply regret the interaction between our professor & our student. We have apologized to Ashley, replaced the instructor, & are reimbursing her tuition for the course. To our friends in Australia, we know that you are a country & a continent, best of luck in the Olympic games!"

On Thursday, when BuzzFeed News initially contacted Southern New Hampshire University, a spokesperson said they were "looking into the matter." They added, "At SNHU, we hold our professors to a high standard of excellence and strive to provide high-quality degree programs for all students. On this question, the student is right. We take this concern seriously and our academic team is working to resolve the matter."

According to BuzzFeed News, Arnold is a stay-at-home mom who is working toward a sociology degree through online courses with Southern New Hampshire University. Her final class required her to complete a project online that involved comparing a social norm in the United States with another country. Arnold chose social media use as her "norm" and Australia as the country for comparison. She told BuzzFeed she was shocked when she got her grade back on Feb. 1, only to see that she had failed. More shocking, perhaps, was the reason: her professor said that, "Australia is a continent; not a country."

"At first I thought it was a joke; This can't be real," Arnold told BuzzFeed News. "Then as I continued to read I realized she was for real."

Arnold chose not to reveal the professor's name to BuzzFeed News, although Arnold said, "With her education levels, her expertise, who wouldn't know Australia is a country? If she's hesitating or questioning that, why wouldn't she just google that herself?"

Arnold also shared with BuzzFeed News the transcripts from the emails back and forth between her and the professor, including the references she shared with her professor. She said, "The research starter on the SNHU’s Shapiro library written by John Pearson (2013) states, that Australia is the 'sixth-largest country in the world' (n.p.). The full name of the country is the Commonwealth of Australia, meaning Australia is both a continent and a country. Therefore, these sections of the rubric should be amended."

The professor wrote back to Arnold,

"I will gladly re-examine your week 2 milestone project report. But before I do I want you to understand that any error in a project can invalidate the entire research project. Research is like dominoes, if you accidentally knock over one piece the entire set will also fall. Australia is a continent; it is not a country. That error made it nearly impossible for you to accurately complete your week 2 research outline correctly. As I mentioned above I will look over your week two paper once again and see if you earned more credits than I gave you."

According to BuzzFeed News, Arnold responded again, this time including a link to the Australian government website. She said,

"Australia is both a country and a continent. It's the only country that is both. I provided a resource in the first email that clarifies that for you. If you need further clarification google or the SNHU Shapiro Library has that information you. Again I mean no disrespect but my grade is affected by your assumption that Australia is not a country when it in fact is. Thank you and let me know if I need to provide further resources proving Australia is a country."

To which the professor responded:

"Thank you for this web-address. After I do some independent research on the continent/country issue I will review your paper."

Arnold told BuzzFeed News she then filed a report with the university to complain. This week, Arnold's professor gave Arnold a new grade: a B+. The professor acknowledged the mistake by saying it was a "misunderstanding about the difference between Australia as a country and a continent," according to BuzzFeed News. She later added in the email, "Please make sure the date, the facts, and the information you provide in your report is about Australia the country and not Australia the continent."

At least, according to Arnold, there is an upside to the incident; she wrote on her Facebook page in a public post on Thursday, "Here is the lesson I learned: as a student going back to school in my late twenties I have sometimes felt inadequate. I have felt ashamed and embarrassed that I’m still in school and do not have a 'real' career yet. However, this class made me realize that I am equal and I can do hard things .... I learned I can advocate for myself successfully even in the face of opposition brought on by a stubborn professor with a Ph.D. I hope this experience will give me courage to continue to advocate for myself and others."