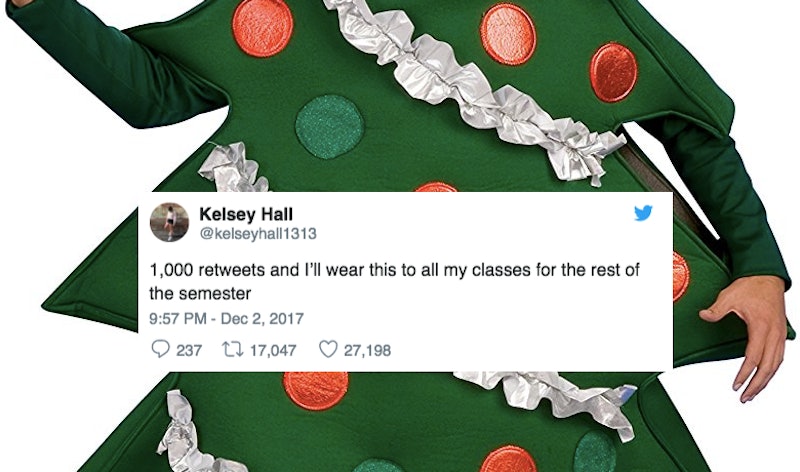 People are getting brave on Twitter — maybe a little too brave. First, there was the girl who promised to donate money to a children's hospital for every like and retweet she got... until the tweet went viral and added up to hundreds of thousands of dollars. Now, there's this girl in a Christmas tree costume who said if her photo got 1,000 retweets, she'd wear the costume to all of her classes for the rest of the semester. (Bustle has reached out for comment and will update upon response.)

By the way, at the time of this article, the count is at 15,777 retweets, and growing. Basically, she's going to wear this costume well into her 50s.

Her name is Kelsey Hall. She's a 20-year-old chemistry major at the University of Alabama, and I'm guessing she has a real sense of humor. On December 2, Hall tweeted a selfie in which she's wearing the most precious Christmas tree costume — you know, because 'tis the season, and all. (Mine's at the dry cleaner, or I'd be wearing it too.) Anywho, Hall got the idea to challenge Twitter: retweet this photo 1,000 times, and she'd spend the rest of the semester walking around campus dressed as a spruce. It couldn't be that bad — how many retweets could one random gal get? It's not like the tweet would go viral. But then it did.

Most people would bail on a promise like this. She's a woman of her word, though; and sure enough, she bravely donned her Christmas tree costume and took to campus with her head held high — probably because she can't move it in any other direction while wearing that costume. Check the video below.

Hall may have kept her promise, but don't think she enjoyed it or anything. She expressed her sincere regret over her choices on Twitter, likely to the amusement of everyone else. One can feel the panic in her voice when she realized the retweets were adding up. She kept a positive attitude, though. Sort of. Not really.

It was all in good fun; and she has at least one thing working in her favor: the semester is nearly over. Soon enough, she'll be able to go back to her normal attire (not sure why she'd want to, though). Well played, Kelsey. Well played.

No one could resist getting in on the fun, and some tweeters found humor at poor Kelsey's expense (while encouraging people to keep retweeting, naturally).

Even the official Twitter got in on the action, which basically means Hall's famous.

Now, she's making headlines all over the internet, including People.com. She told People, "My mom got me the costume because I love Christmas, and she thought it was funny." Her mom clearly has amazing taste in fashion. "I definitely did not think I would get 1,000 retweets," she continues. "I thought it was a very unrealistic number—the most retweets I have ever got before was, maybe, five. When the retweets were coming in, I was shocked!"

While Hall notes she's had mixed reactions (how could anyone not like this costume?), she held fast to her commitment in the spirit of the holiday: "I went through with it because I know everyone is going through a tough time with finals coming up, and hopefully, I could bring some Christmas cheer to my classmates!" If this doesn't bring happiness to your day, I can only assume you're the Grinch.

If you too want to feel the Christmas cheer, like Hall, you can walk around school or work dressed like a tree with a little help from Amazon, where the costume is currently for sale.