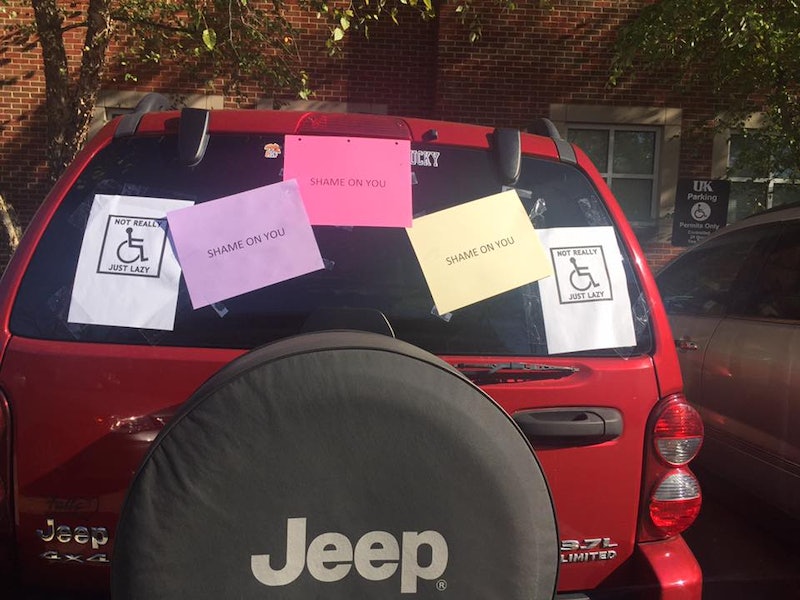 It's been said before, but it bears repeating: Disabilities and illnesses aren't always visible. Apparently, the residents of a town in Kentucky could stand to be reminded of this, because a college student with cancer's car was recently vandalized after she used an accessible space, despite having a pass legally allowing her to park there. The angry messages left on her car claimed that Lexi Baskin, a pharmacy school student at the University of Kentucky, must have bought or faked her pass to take advantage of the parking space's close proximity to the building. But as she explained in viral posts on social media, her appearance belies her health.

In late October, Baskin parked outside the university's medical library to meet with a professor. When she returned to her car, it was covered in paper signs taped to the windows. Some accused her of being "just lazy," while others declared "SHAME ON YOU." One letter justified the vandalism.

"There are legit handicapped people who need this parking space. We have seen you and your friend come and go and there is nothing handicapped about either of you. Your tag must be borrowed or fake. We will make every effort to see you fined or towed for being such a selfish, terrible person."

What the vandal didn't know is that Baskin's accessible parking pass is perfectly legal. According to LEX 18, the student was diagnosed with a tumor located on her brain stem. Although it was removed, she has undergone radiation treatment on her lunch break for the past four weeks. This leaves her exhausted and dizzy, so her doctor recommended accessible parking to keep her from walking too far. She may not need a wheelchair or crutches, but Baskin's parking pass is very much necessary.

Upon seeing her car covered in shaming messages, a frustrated Baskin snapped photos and posted them on Twitter as a "reminder that you have no idea what's going on in people's lives."

It quickly went viral, with more than 47,000 retweets and nearly 108,000 likes. In the comments, some shared similar stories of their own; others commiserated about the lengths people with disabilities are expected to jump through to "prove" their disability.

Baskin posted the photos on Facebook the next day with a longer message. "Just a gentle reminder that you have no idea what is going on in other people's lives," she wrote. "Just because you can't physically observe something does not mean that a person is not feeling it. Just because I look fine in the 2 minutes I walk from my car to the building does not mean I am not battling cancer and undergoing radiation treatment."

She went on to write that she doesn't need sympathy, but she wants readers to remember not to jump to conclusions. Nobody can ever truly understand another person's struggle, especially when that person is a total stranger with whom they've never spoken.

The University of Kentucky released a statement to LEX 18 saying the school regrets Baskin's experience and clarifying that it was the action of a "rogue individual unaffiliated with Transportation Services or our police department."

Invisible illnesses like Baskin's may be difficult to spot on the outside, but that doesn't make them less debilitating. According to Disabled World, 96 percent of people with chronic medical conditions live with an invisible illness, and about 25 percent have some kind of activity limitation. Baskin isn't the first to be accused of laziness. Those who suffer from illnesses that aren't readily apparent are often asked to "prove" their disability over and over again.

As unfortunate as Baskin's experience was, hopefully her posts will serve as reminders to not leap to conclusions about other people. On Facebook, she added that she bears no ill will toward the person who vandalized her car. " I will choose to love this person and pray for them," she wrote. "I hope that the darkness in their heart is replaced with unconditional love and happiness."