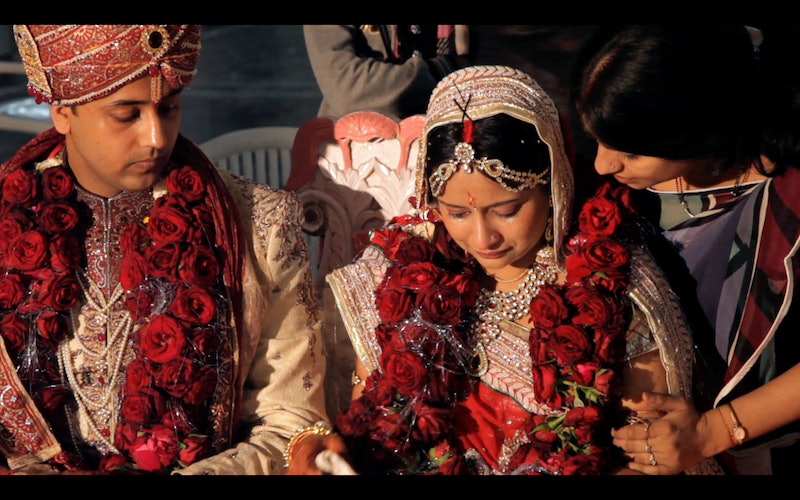 For many girls growing up in India, the idea that they will get married one day isn't a choice — it’s something that’s destined from birth. Their parents will help them find husbands, and they will leave their families behind to become wives. For those of us living in the United States, the concept of arranged marriage might be hard to understand, but with the new documentary, A Suitable Girl, directors Sarita Khurana and Smriti Mundhra offer a unique look at a topic that's often misconstrued. The directors, who are both of Indian descent but grew up in the U.S., do this by following three young women — Ritu, Dipti, and Amrita — over the course of four years as they each go through the process of finding a husband, all while struggling with the fact that marriage could mean they will have to give up their independence.

“Women in India today are living in a world their mothers could only dream of,” Mundhra tells me over the phone. Globalization has allowed women India to pursue higher education, work outside the home, and hold off on marriage, and "so when you have that taste of independence,” the director continues, “how do you reconcile and come back to this sort of patriarchal system that thrust itself on you?”

It’s the question lingering throughout the documentary, which gets its title from the way the word “suitable” is commonly used in matrimonial ads to describe the ideal Indian woman — someone who is fair-skinned, family oriented, and willing to prioritize her marriage above all else. Yet this idea that a woman’s greatest role is wife is in direct conflict with the independent lives many women are now living. “Marriage in India is always romanticized, which is problematic,” Khurana says. “We wanted to question what a ‘suitable’ girl is at a time when not everyone wants to fit into that category even if they want to get married.”

What Khurana and Mundhara show in the film, which will debut at the Tribeca Film Festival, is that the problems most people have with arranged marriage aren’t necessarily specific to the way matrimony is handled in India, but a byproduct of a patriarchal system in which women are asked to make incredible sacrifices that men don’t have to make. While many things have changed over the years when it comes to arranged marriage, including the addition of technology (which gives women more choices when it comes to who they will marry), the expectations and pressure women face after all this time has not.

Even Mundhra felt the pressure to get married after a breakup in her late 20s. “My mom flew into a panic and basically took over my dating life for a year,” she recalls. “I was vulnerable enough to do it.” She did almost everything you see the three women in the film do: placing a matrimonial ad in the newspaper, creating an online matrimonial profile, and meeting “maybe 100 different guys in four different countries.” She didn’t find a husband this way (she would later marry screenwriter Christian Magalhaes) but she started to understand why people go through all this. "People are drawn to being a part of a community," she says. "They want to belong, and I think there’s a value in that."

Mundhra explains that she and Khurana wanted their doc to tackle the topic of arranged marriage, but didn’t want it to definitively say whether it was good or bad. It's why there's no narration in the film; they wanted real women tell their own, very different stories. “I think in the West it’s often assumed [arranged marriage] is forced," Khurana says. “It was really important for us to give a depiction of it that was contemporary, that was strong, that included the whole spectrum of what it could look like and what it actually is. There is absolve. There is agency.”

There is even romance, an aspect of arranged marriage that often goes ignored, but is what Dipti, a 30-year-old teacher from the outskirts of Mumbai who's featured in the film, is searching for. “It’s not arranged versus love,” Khurana says, “and I think it’s that binary that people toss out in the West that is already putting a lens on it that it’s somehow different or other or less than.”

In reality, the pressures women face in India are similar to those faced by any woman who feels the world cares more about her marital status than her career achievements. Both Ruti, who put off marriage to get her MBA, and Amrita, who married with the understanding that she would continue to work, are looking to have it all, but society doesn’t make that easy. Women everywhere are asked to make the hard choice between marriage and a career, but in India that choice can feel like it’s already been made for you.

“The institution of arranged marriage has evolved a lot to accommodate young people’s changing lives and expectations, but I don’t think I’m exaggerating when I say marriage is the cornerstone of Indian society,” Mundhra says. “No matter how accommodating it can be it still comes back to when you’re a certain age, it’s time to get married. Everything else becomes secondary.”

A Suitable Girl will leave you with more questions than answers, which is what Khurana and Mundhra wanted, as there's no one "right" way to talk about arranged marriage. "I don’t think centuries of a patriarchal system is going to disappear in a generation or two generations or even five generations," Mundhra says. "I think it’s going to take every woman asserting herself in whatever way she feels comfortable or compelled to be able to make real change."

The documentary shows the small ways in which young women in India are asserting their independence in a system that just wasn't designed for it — and it proves that there is always power in fighting, even if we don't always feel like we're succeeding.