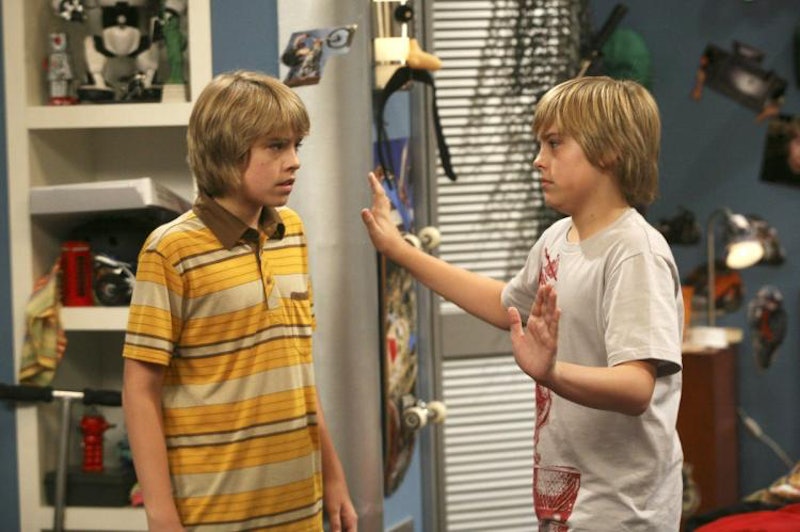 We're living in the golden age of television reboots and revivals. Beloved shows from our childhoods are being brought back in new and interesting ways on many networks across both cable and streaming services. Sometimes, it can feel as if there's more updated old content on TV than actual new content. But, you probably won't see a Suite Life of Zack & Cody revival amongst its peers, Cole Sprouse tells Bustle. He thinks the classic show is better left in the past.

The 24-year-old actor has returned to television for The CW's Riverdale, his first acting project since his days at the Tipton hotel (and later, the Tipton cruise ship). Disney Channel's Suite Life series ended in 2011, and, while Sprouse has often said that he doesn't regret doing the show that made him famous, he's not in a rush to revisit it either.

"I don’t think Dylan and I would ever want to do that," he says, referring to his twin brother, who played the Zack opposite his Cody for six years. "My brother and I have a profound nostalgia for our youth, and I think people need to come to terms with things leaving and being gone."

While he doesn't knock the series that do choose to return via revivals (like Gilmore Girls on Netflix) or reboots (like Girl Meets World), he doesn't think it's the best choice for the Suite Life crew. "I know that I’ve heard of a couple of other shows that were around the same time as us that are coming back, and that’s fine. If they want to live that again, that’s totally OK," he says. "But, I don’t think any conclusion ever comes from bringing those things back. In fact, I think it only opens up more of a possibility of destroying the thing that we once found beautiful and golden and nostalgic, if done incorrectly."

While there have been rumors of a Suite Life revival over the years, it seems they are just that — rumors. Sorry, Suite Life fans, but Sprouse says, "I think for my brother and I, that was a part of our lives that we found a really healthy conclusion to ... People should like what it was and enjoy what it was without having to have some new conclusion to it."

The Suite Life days may be over, but at least fans can follow Sprouse's return to acting with Riverdale as he grows up and experiences adventures far outside the walls of a hotel or a cruise ship.