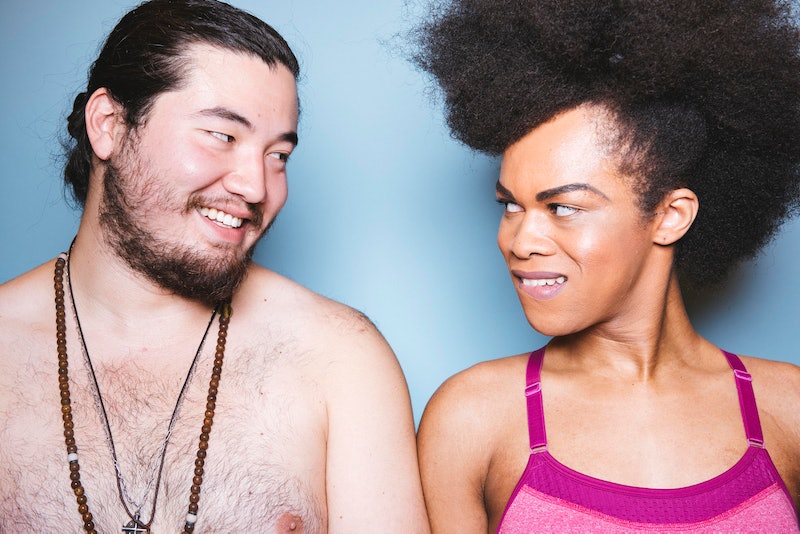 Yes, you read that headline correctly. A Swedish politician is advocating for paid employee sex breaks. Whaaaat?! Erik Muskos, 42, thinks that employees should get a one-hour paid break during the day to go home and "get busy," so to speak, reports Quartz.

Muskos is a local council member for the Övertorneå in Northern Sweden, a locality with a population of around 2,000 people. "There are studies that show sex is healthy," Muskos told the AFP news agency regarding the motion. "It's about having better relationships," he said.

He "saw no reason" why the motion would not pass. He also said couples were not spending enough time together, and that the paid sex breaks would benefit single and coupled-up people.

"I think it is wonderful acknowledgement of the importance of spending uninterrupted time with your partner," Rachel Needle, Psy.D., licensed psychologist and certified sex therapist in West Palm Beach, Florida, tells Bustle. "Whether it is engaging in sexual activity, touching, kissing, or connecting emotionally, time with your partner should be prioritized. Having a paid break to do that in the middle of the day encourages that connection and further reinforces the importance of both physical and emotional intimacy with your partner."

Exactly! So Muskos could be onto something… And who knows? Maybe it could start a worldwide trend. One can hope!

Dr. Michael Krychman, MD, OB/GYN, sexual medicine gynecologist and the executive director of the Southern California Center for Sexual Health and Survivorship Medicine, agrees about the health benefits of sex. "It is widely accepted that sexual health and general health are intertwined," he tells Bustle. "We know that people who engage in regular sexual intimacy have lowered blood pressure, better self-esteem, and that it may promote overall heart health. Sex does decrease stress and has been associated with overall improved happiness."

So what does Dr. Krychman think about Muskos’s paid sex break idea? "It makes good practical sense that employees who have good sexual intimacy may be happier in the workplace, may be more productive, and may have less overall adverse effects from job stress," Dr. Krychman says. "Many people have sex for stress relief. While it may be a great idea in concept, I still wonder how employers would follow up and enforce the sex break."

Chris Armstrong, relationship coach and owner of Maze of Love, tells Bustle he loves the idea. "When we look at the Holidays that people get, it's all about allowing them to connect to family (Christmas, Thanksgiving), history (Presidents Day, Martin Luther King Day, Fourth of July). Why not celebrate the importance, the necessity of connecting to your partner? It sends a great message in that regard," he says. "It also begins to normalize sex as opposed to letting it continue as a taboo thing. This is a fabulous idea."

Great question — and others thought the same thing, including Muskos. He, too, said there's no way to know if employees will use the designated one-hour break for sex — you just have to trust they will. "You can't guarantee that a worker doesn't go out for a walk instead," Muskos said. Regardless, it's a pretty genius idea.

And people in Sweden have other work perks, too. Two or three times per work day, coffee breaks (aka fika) are common. (Yes, please!) And you’ve probably heard of Sweden’s ~amazing~ 480 days of paid parental leave. So if you add paid sex breaks to the equation, living in Sweden looks even more alluring.

Even though it's yet to be determined if the paid sex breaks motion will pass, it’s intriguing nonetheless and definitely would make going to work more fun, knowing you "had to" leave and take a sex break at some point.