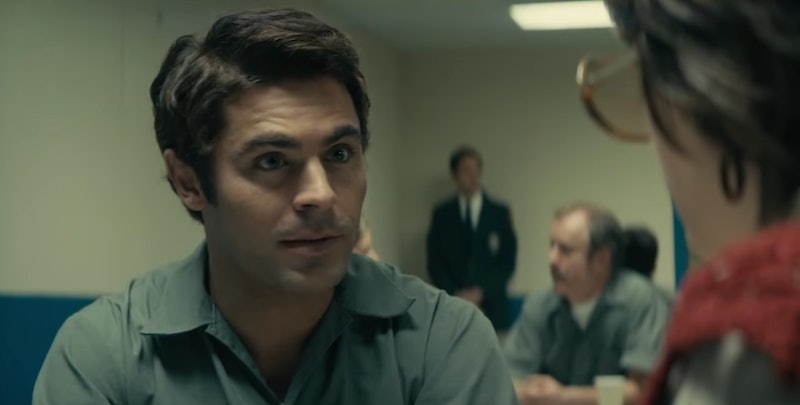 After the trailer for a new Ted Bundy movie starring Zac Efron came out last Friday, the Internet was abuzz with people talking about how uncomfortable they feel with this potentially romanticization of a serial killer (Efron is, after all, a heartthrob, and a lot of the mythology about Bundy has been built around his looks). On Tuesday, a Ted Bundy survivor reacted to Zac Efron's casting as the serial killer.

Kathy Kleiner Rubin, who survived being attacked by Bundy when she was a 20-year-old college student in 1978, watched trailer for Efron's movie, Extremely Wicked, Shockingly Evil and Vile, in an interview with TMZ. The survivor had a somewhat surprising response to the Bundy biopic, saying, "I don't have a problem with people looking at it, and as long as they understand that what they're watching wasn't a normal person."

That's not exactly the response one might expect from a victim of Bundy's calculated attacks regarding a movie which many believe seems to glorify Bundy, rather than portray the man who confessed to murdering at least 30 women, per The Guardian, in the negative light he deserves. Kleiner Rubin told TMZ that she agrees that the upcoming Efron flick, which also stars Lily Collins, seems to portray Bundy in a more flattering light than she might hope for. "I think the movie does glorify him more than I think he should be, but like I said, I think everyone should see it and understand him as what he was even when he was the 'perfect son,'" she said in a video chat interview.

Even though she cautioned against normalizing Bundy, Kleiner Rubin acknowledged that in order to portray the killer in an honest way, you have to include some aspect of the serial killer's charisma. "When they do say positive and wonderful things about him — that's what they saw, that's what Bundy wanted you to see, so it was picked up as that," Kleiner Rubin told TMZ.

Earlier this week, Rolling Stone published an interview with Kleiner Rubin in which the survivor recalled her experience as a college student at Florida State University, where Bundy crept into her bedroom and nearly killed her. "He hit me in the face and broke my jaw in three places and I passed out," Kleiner Rubin said, recalling the break in, which targeted the whole Chi Omega sorority dorm. Another woman named Karen Chandler survived the attack along with Kleiner Rubin, but Bundy murdered two of the sorority sisters in a nearby room, per The Washington Post. That was in 1978, the final year of Bundy's four-year killing spree that targeted young, college-aged women like Kleiner Rubin.

In her interviews with both TMZ and Rolling Stone, Kleiner Rubin expressed that she encourages people to learn about Bundy, rather than avoid movies and documentaries like Netflix's The Ted Bundy Tapes. "I think it’s good for people to read books about Bundy. I really do. They need to know that there’s evil out there, but they can control it," the survivor, now in her forties, told Rolling Stone.

In her interview with TMZ, Bundy's surviving victim explained that she's now speaking out in order to "care for the women," and she advised, "In your gut if you just feel that something doesn't feel right, just say no." And if listening to your gut means going to see Extremely Wicked, Shockingly Evil and Vile, well, then, Kleiner Rubin is OK with that.

More like this
Gabby Petito’s Family Responded To The New Lifetime Movie About Her Final Days
By Grace Wehniainen
At 14, Jurnee Smollett Was Taking Meetings With Missy Elliot & Lauryn Hill
By Chloe Foussianes
A New Scooby-Doo Movie Confirmed Velma Is Gay & Twitter Is Pumped
By Radhika Menon
Everything You Need To Know About ‘Black Panther: Wakanda Forever’
By Bustle Editors
Get Even More From Bustle — Sign Up For The Newsletter