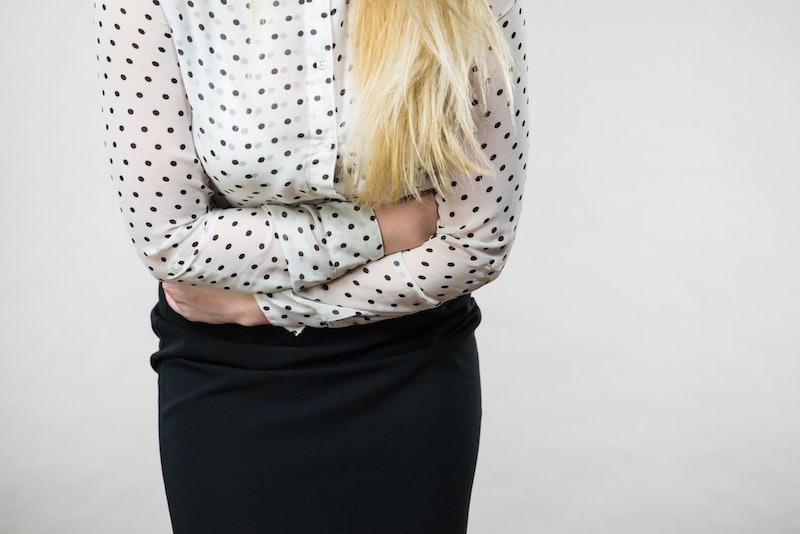 Just when you thought the period conversation was finally opening up, along comes a statistic to shatter those positive thoughts. According to a new survey by hygiene company Initial UK, a third of male office workers think discussing periods in the workplace is "unprofessional". Cue the blood boiling.

As Stylist reports, 32% of men have a negative view when it comes to women daring to mention periods in the office. The survey — which collected responses from 2,000 office workers — also found that women were reluctant to talk about menstruation. (An unsurprising finding if male colleagues are displaying signs of disapproval.)

In fact, surveyed women said they would be more comfortable doing the following than talking about periods in front of men in the office:

And almost half of female office workers would feel uncomfortable taking period products out of desk drawers or bags in the presence of colleagues. That particular discomfort is so strong that four out of 10 women admitted to using the likes of tampons for longer than they should. Why? Because they didn't have another one and didn't want to ask someone else in the office.

The rest of the findings detailed an aspect of working life that many people with periods can relate to: the dreading telling your boss that you're currently menstruating. A grand total of 48% of women surveyed were reluctant to discuss period symptoms with their superior while more than half said they were apprehensive about taking a sick day due to symptoms.

"The fact that a third of men think a grown-up discussion about menstrual hygiene is unprofessional, and that almost half of women feel uncomfortable discussing this element of their wellness with their manager, shows how much work needs to be done."

Companies like Hey Girls are pushing for period dignity in the workplace by encouraging offices to stock period products in staff toilets. Not only would this stop people feeling helpless when their period hits them unawares, but it would also go some way to making menstruation more visible at work.

If the above statistics are anything to go by, such visibility is something that desperately needs to be achieved.