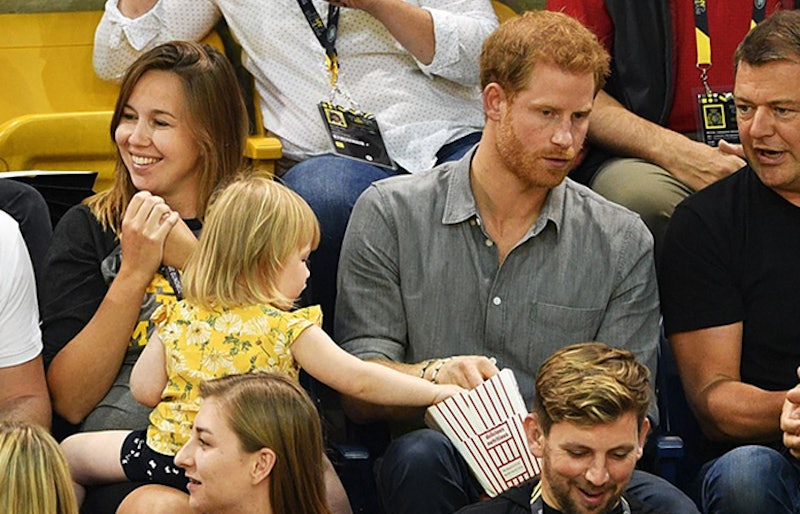 Well, this is a delightful way to begin the day: A video of a toddler stealing Prince Harry’s popcorn is currently making the rounds, which means obviously I will be ceaselessly watching it on repeat for the next 10 minutes. The video was captured at the 2017 Invictus Games in Toronto on Wednesday night, after which it went quickly viral — and, I mean, it’s not hard to see why. It contains three of the things the internet loves the most: Cute kids,s nackable treats, and Prince Harry. Yes, please.

Inspired by the Warrior Games in the United States, Harry launched the Invictus Games in 2014. A Paralympic-style event for injured, wounded, and ill military personnel and veterans, the Games function as a way “celebrate their fighting spirit through an inclusive sporting competition that recognizes the sacrifice they have made,” according to Harry himself; the name comes from the Latin word meaning “unconquered” or “undefeated.” Harry remains a patron of the Invictus Games Foundation.

The 2017 Invictus Games began on Sept. 23 and will run through Sept. 30; you’ll likely recall that Harry and Megan Markle made their first public appearance together towards the start of this year’s event.

Prince Harry was also in attendance for an event on Sept. 27, which is when the popcorn thief struck. Like the rest of us mere mortals, Harry was stuck snacking on stadium popcorn during the event — but while he was preoccupied chatting with a friend, the toddler in the seat next to him began reaching over and sneakily nabbing a few pieces to nosh on herself. He did, of course, realize it was happening eventually — and his reaction is priceless:

For the curious, the little girl is two-year-old Emily Henson, according to The Telegraph; she’s the daughter of David Henson, a former royal engineer and current Paralympian. (That’s Henson’s wife, Hayley, holding Emily in the video.) Henson captained the UK Invictus Games Team during the very first event in London in 2014; he also won the bronze medal in the 200m race at the 2016 Paralympics. He and Harry are actually friends, apparently, so that might explain why they were all sitting together. (Or maybe it was just chance. Can't rule that out, either. It's fortuitous either way.)

Twitter, naturally, is enthralled by the video, because… well, it’s just so cute. There’s a lot of terrible stuff going on in the world right now, and sometimes, we just need to see things like this to remind us that there’s still some good out there, too.

And by "there," I mean in the toddler's position, not Harry's.

Good thing the Tower of London hasn't been used as a prison since 1941.

I'm not sure I'd say that — we all make mistakes — but it's what you do with those mistakes that matters. Harry's got a lot of integrity.

This is actually one of the headlines that's making the rounds connected to this story. It is definitely my favorite.

"Prince Harry: Popcorn Guy" has a certain ring to it as a title, does it not?

As the saying goes, I have lost my ability to even.

May we all carry ourselves with the confidence of a two-year-old stealing popcorn from royalty.

9. She's Never Living This Down

It will probably get old to her eventually — but NOT TO EVERYONE ELSE!

It's a dirty job, but somebody's got to do it.

The Invictus Games runs through Sept. 30 in Toronto. Good luck to all the competitors!