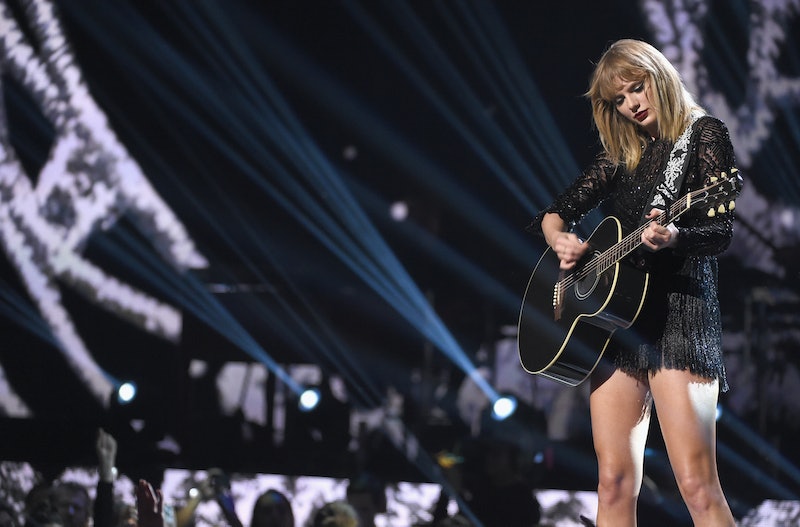 On Monday, Aug. 14, a verdict was reached in Taylor Swift's countersuit against former radio DJ David Mueller, who she alleged groped her during a meet-and-greet in 2013. As reported by TMZ, the jury's trial verdict ruled in favor of Taylor Swift, awarding her the $1 that she sought from Mueller in damages. The jury unanimously found Mueller guilty of assault and battery. Swift's reps issued the following statement to Bustle regarding the verdict.

I acknowledge the privilege that I benefit from in life, in society and in my ability to shoulder the enormous cost of defending myself in a trial like this. My hope is to help those whose voices should also be heard. Therefore, I will be making donations in the near future to multiple organizations that help sexual assault victims defend themselves."

According to CNN, the jury also ruled that Swift's mother Andrea, and radio promotions director Frank Bell were not liable for tortious interference. The news outlet reported that Swift embraced her mother after the reading of the verdict on Monday.

In 2015, Mueller had filed a lawsuit claiming that Swift, her mother, and Bell pressured his employer, Denver, Colorado, radio station KYGO, to fire him after he alleged grabbed Swift's butt during a photo opp in 2013. That lawsuit claimed interference in his $150,000 a year contract as a local radio DJ for the station and he sought $3 million in damages. Swift filed a countersuit, seeking only $1 in damages as a way to "[serve] as an example to other women who may resist publicly reliving similar outrageous and humiliating acts," according to the Washington Post. Mueller's lawsuit against Swift was dismissed on Friday, finding no evidence that she acted improperly nor that her reporting of the incident was improper.

This verdict is a huge win for Swift, as well as women who have experienced similar incidents.