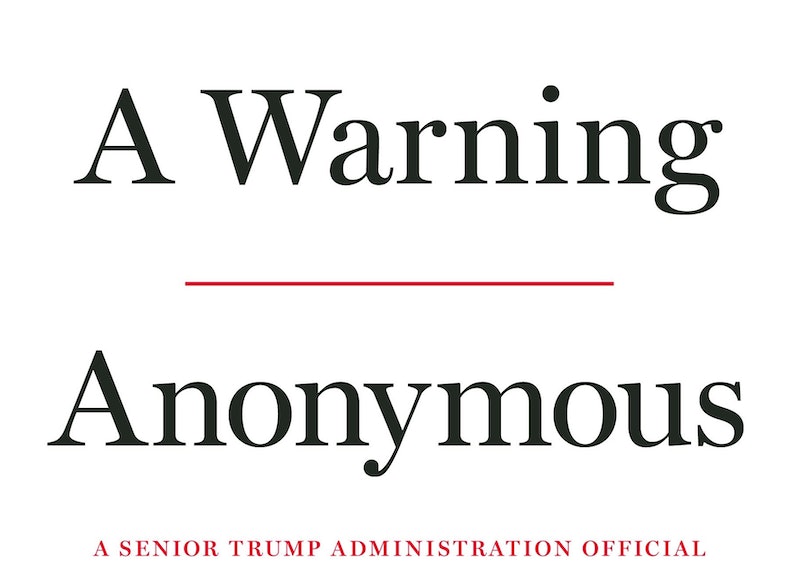 The worlds of politics and books have been set a-buzz by Hachette's upcoming publication of A Warning about Donald Trump from "a senior Trump administration official." Publishing anonymously, the same official who self-identified as "part of the resistance inside the Trump administration" in a Sep. 2018 op-ed, now warns readers that Trump is unfit to serve a second term in the White House. A Warning is out on Nov. 19 and is available for pre-order today.

To be clear, the aspects of Trump's behavior that disturb the anonymous author of A Warning aren't likely to be the ones that make you grit your teeth and bite your nails. Sure, the senior White House official is concerned by the fact that Trump "stumbles, slurs, gets confused, is easily irritated, and has trouble synthesizing information, not occasionally but with regularity," but other issues, even ones that were present on the 2016 campaign trail, haven't concerned them much before now.

In many ways, A Warning's author is just now beginning to understand what women, queer folks, and members of ethnic and religious minorities have been saying about the man in the White House. According to The New York Times, Anonymous "now seems to recognize, somewhat belatedly, that President Trump's... boasts about grabbing women’s genitals might have constituted their own kind of warning" about his capacity for statesmanship.

Now, the senior White House official feels "uncomfortable" with Trump's behavior toward women. In an excerpt from A Warning published in The Washington Post, the author writes that they "[ha]ve sat and listened in uncomfortable silence as he talks about a woman’s appearance or performance... He comments on makeup. He makes jokes about weight. He critiques clothing. He questions the toughness of women in and around his orbit. He uses words like ‘sweetie’ and ‘honey’ to address accomplished professionals. This is precisely the way a boss shouldn’t act in the work environment."

Additionally, Trump's comments about migrant women and families have made the anonymous writer cringe. A Warning offers an alleged quote from Trump complaining about migrant "women coming in with like seven children," calling them "useless" and insisting that "[t]hey don’t do anything for our country."

"At least if they came in with a husband," Trump allegedly stated, "we could put him in the fields to pick corn or something."

The Trump administration isn't taking the publication of A Warning lying down. Deadline reports Department of Justice lawyers are pressing Hachette for information on the author's identity, arguing that A Warning could potentially violate a non-disclosure agreement signed by Anonymous. As of this writing, no one has a clue who Anonymous is, and it seems they would like to keep it that way.

"Removing my identity from the equation deprives [Trump] of an opportunity to create a distraction," writes the author of A Warning. "What will he do when there is no person to attack, only an idea?"

Anonymous' A Warning is out on Nov. 19 and is available for pre-order today.

More like this
Prince Harry Incorrectly Recites Christina Aguilera’s “Genie In A Bottle” Lyrics
By Jake Viswanath
Man Meets Politics: ‘Boy Meets World’ Star Ben Savage Is Running For Congress
By Jake Viswanath
Watch Jacinda Arden’s Devastatingly Honest Resignation Speech
By Sam Ramsden
What The UK Blocking Scotland’s Gender Recognition Bill Means
By Sam Ramsden
Get Even More From Bustle — Sign Up For The Newsletter
From hair trends to relationship advice, our daily newsletter has everything you need to sound like a person who’s on TikTok, even if you aren’t.