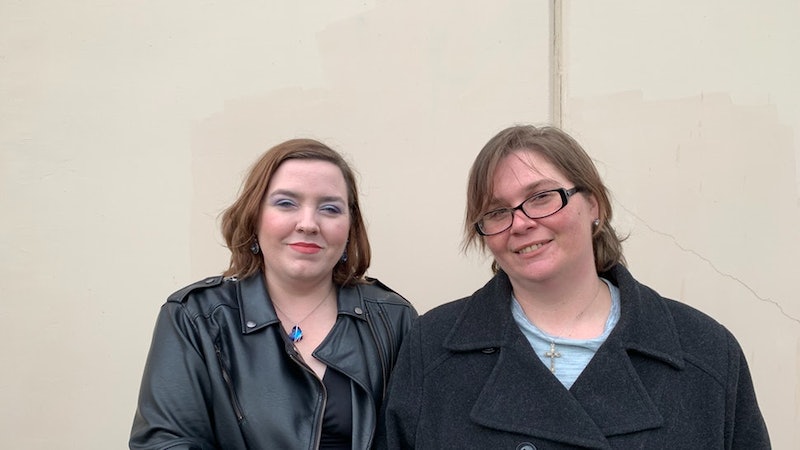 Rachel and Laurel Bowman-Cryer have been involved in a legal battle over a wedding cake for seven years. When Rachel and her mother visited Sweet Cakes by Melissa in Gresham, Oregon, in January 2013, co-owner Aaron Klein refused to serve them. He reportedly quoted a Bible verse from Leviticus: "You shall not lie with a male as one lies with a female; it is an abomination."

This sparked a legal battle that the Bowman-Cryers thought was over in 2015, when a court ordered Aaron and his wife, Melissa, to pay $135,000 in emotional damages. Since then, the Kleins have become recognizable symbols for the GOP's campaign for religious freedom, opening up the Bowman-Cryers to harassment from online commentators. And now, following its 2018 ruling on a similar case, the Supreme Court has asked the Oregon Court of Appeals to rehear the Bowman-Cryers case. The outcome could affect other "religious freedom" cases where business owners refuse to serve LGBTQ people.

"We've already spent seven years in this process, and the idea of getting sent back to start at square one just made our jaws drop a little bit," Rachel Bowman-Cryer says.

The case has been especially difficult for the Bowman-Cryers because they've faced near-constant harassment since 2013. Two weeks after Laurel filed her original discrimination complaint, Aaron Klein posted a public message on Facebook showing a notice from the Oregon Department of Justice, The Oregonian reported. It included Laurel's address and phone number. "This is what happens when you tell gay people you won't do their 'wedding' cake,'" Aaron Klein wrote. The couple went on to tour the country with then-presidential candidate Ted Cruz in 2016, and were even featured in a campaign clip titled "Stand for Religious Liberty."

"This experience was shattering to them in a way that can be hard for people to understand if they haven't ever been there themselves."

Since then, the Bowman-Cryers say they have received harassing messages and death threats online. Rachel tells Bustle they've struggled to keep their family safe because of the amount of threats they receive.

"When you experience discrimination from a business, it carries over into your everyday life because you never know when it's going to happen again," Rachel tells Bustle. "You never know when you're going to be turned away or when someone's going to judge you based on their beliefs."

Jennifer Pizer, senior counsel for Lambda Legal, tells Bustle that the couple moved to Oregon "based on an understanding that things were a lot better here" than in Texas, where they grew up in conservative religious environments and "both experienced intense family rejection because they're lesbians."

Oregon has more protective laws for LGBTQ people than half of other states, and, until the incident at the bakery, the couple say they felt safe raising their two adopted daughters there. "This experience was shattering to them in a way that can be hard for people to understand if they haven't ever been there themselves — if they haven't experienced the physical fear for their safety of growing up in a violently anti-LGBT environment," Pizer says.

The Bowman-Cryers' case is a bit different than many discrimination cases, Pizer says, because they were actually awarded monetary damages for the emotional harm they suffered. Their case speaks to "why these religion arguments are so damaging and why they're problematic legally — because of the harm that can be inflicted," Pizer says.

The Supreme Court, in sending the case back to the Oregon Court of Appeals, isn't asking it to rehear whether discrimination happened, Pizer notes. Rather, it's asking the court to reevaluate whether government officials in Oregon showed anti-religion bias while handling the case. In 2018, the Supreme Court ruled on a similar case where a baker in Colorado refused to bake a cake for a gay male couple's wedding. The court didn't rule on the issue of discrimination; instead, it found that officials in the the Colorado Civil Rights Commission, which brought the case on behalf of the couple refused service, had an anti-religion bias.

But Pizer says the Kleins' lawyers already made arguments about Oregon officials having anti-religion bias when the Oregon appeals court last heard the case, and the court didn't find that there was any bias. Bustle has reached out to the Kleins for comment.

"You never know when you're going to be turned away or when someone's going to judge you based on their beliefs."

Pizer says it could could take the appeals court a few months to a year to reach a decision. The potential length of legal battles and a lack of access to resources often keep LGBTQ people from filing or following through with discrimination complaints, but Pizer says they also face a patchwork of state laws across the country. About half of states, including Oregon, have public accommodation laws that prohibit businesses, for example, from discriminating against people based on race, religion, or sexual orientation, among other protected statuses. Five states — Alabama, Georgia, Mississippi, North Carolina, and Texas — only have public accommodation protections for people with disabilities.

Pizer points out that the Equality Act, which was passed by the House in May 2019, would provide federal discrimination protections to LGBTQ people and women. She says Christian religious groups are pushing for exemptions, but that the Bowman-Cryers' case shows why those kinds of exemptions would do a lot of harm. When LGBTQ people are excluded from businesses, they're socially ostracized. And when that social ostracization is accepted, it affects access to medical care, housing, jobs, and just public space. "It has intense psychological consequences to being treated like you're not good enough to be served like everybody else," she says.

The Bowman-Cryers say they're trying to focus on their two adopted daughters, Lizzy and Anastasia, who are "the driving force" behind their fight despite the continued harassment. "They're both disabled and autistic, and they're going to face a lot of discrimination in their lives," Rachel says. "Our goal was to give them an example of how to be strong and how to stand up for what you believe in. It's what keeps us going even knowing that we may have several more years of this to go through."

Rachel says the Supreme Court's order that the appeals court rehear part of their case was "like a punch in the gut." But she and Laurel did what they've been doing for seven years: "You take it and get back up and move forward."

They say they will continue to pursue the case not just for their daughters, but for the LGBTQ community. "We believe in the law and we would just like to see it enforced," she says. "We would like for LGBT people be able to go into businesses without fear of being discriminated or tossed out because of who they are and who they love."