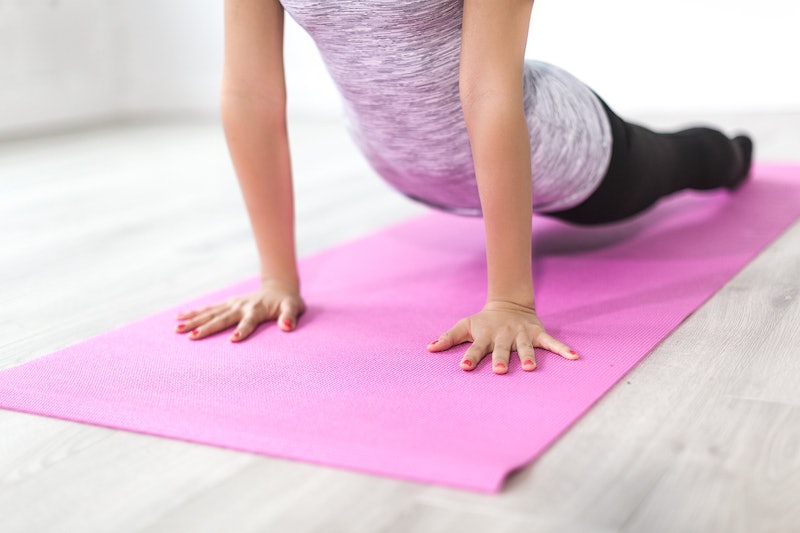 The gym should be a place you can zone out, blow off some steam, and focus on you — not an easy task when other people might not have the same intentions. One gymgoer recently discovered that, when a man put her in quite the uncomfortable position that involved his smartphone camera; thankfully, she was made aware of his inappropriate actions when another woman called out the guy taking pictures of her stretching. The whole story was shared on Reddit.

The woman, who goes by meow1958, was doing a hip flexor stretch when she heard another woman yell, "Stop it! Take away his phone!" That was when she saw the man standing behind her taking pictures of her on his phone, obviously without her knowledge or her consent. Thankfully, there was this kind stranger nearby, a good samaritan who revealed some seriously shady behavior and likely stopped it from happening again — at least, at the hands of this man, who had apparently taken pictures of a number of people.

In a culture where humans (particularly women) are still objectified and not always in total control of their own bodies, this woman stood up for a complete stranger, inadvertently standing up for ladies everywhere.

Whereas many people might've looked the other way — not wanting to get involved, or perhaps thinking someone else would address it — this woman didn't hesitate to take matters into her own hands. Someone give her a cookie.

Sadly, this isn't the first we've heard of people's privacy and bodies being invaded at the gym; and even more sadly, it probably won't be the last. It wasn't that long ago that former Playboy model Dani Mathers took a nude photo of a 70-year-old woman in the locker room, posted it on her Snapchat, and wrote, "if I can't unsee this then neither can you." Another story surfaced a few years back of a woman sexually harassed by her personal trainers.

The gym isn't the only place women are harassed while trying to stay fit. Even when they hit the outdoors, it's a big problem. In fact, a 2008 survey by Stop Street Harassment found that 24 percent of American women don't exercise outside because they worry about harassment and assault. Runners in particular experience harassment, with one survey by Runner's World putting this at around 43 percent of female runners. (FYI, it's four percent for men — just to put things into perspective.)

If it's not safe for women to work out outside and in the gym, does that mean we shouldn't leave the house?

It's a terrifying truth that a man won't hesitate to pull out his phone in the middle of a crowded gym and start taking pictures of strange women. The complete lack of concern and fear gives the impression he doesn't think he's responsible for any wrongdoing — and that is incredibly disturbing. A woman should be able to go to the gym and do whatever she wants, wearing whatever she wants, without concern for people invading her body or her space.

Three cheers for the lady who served as a reminder of this and called out the creeper taking photos — I salute you!