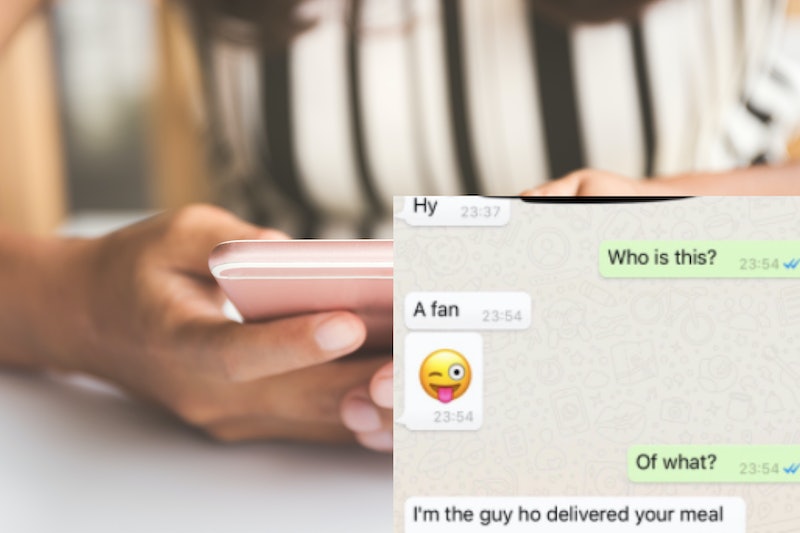 Like many folks in today’s tech-infused world, Michelle Midwinter sometimes orders delivery via a smartphone app — she uses Just Eat. Also like many folks, she has a reasonable expectation that doing so won’t be a huge safety risk. So, when a delivery driver allegedly sent her creepy text messages after dropping off her order, she was appalled and concerned — and what’s more, after her tweet about the story went viral, it’s become clear that the kind of privacy violation and creepy behavior the woman claims happened is a much bigger problem than many people might think.

Just Eat is currently investigating the delivery incident and speaking with Midwinter offline, a spokesperson tells Bustle in a statement; additionally, the company’s Customer Care Senior Management team is reviewing how Midwinter’s complaint was handled and will make sure that “appropriate action is taken to ensure this doesn’t happen again.” The Information Commissioner’s Office — the independent regulatory office that deals with and enforces the Data Protection Act 1998 and Privacy and Electronic Communications (EC Directive) Regulations 2003 throughout the UK — has also said in a statement on Twitter that they are “aware of reports” of the incident and “will be looking into it.”

After her original tweet went viral, Midwinter, who is based in Bristol in the UK, wrote a full statement describing her alleged experience and posted it to Twitter as a follow-up. According to Midwinter’s statement, she and a friend used Just Eat to order takeout on Jan. 13, 2018. It was far from her first time using the app; she considers herself an “avid user … as it is easy, quick, and — presumably — safe.” Upon delivery of her order, she found the driver’s demeanor to be “not friendly, or polite”; he allegedly “just looked at me slowly and handed me the food.” She wrote that he “seemed angry, as if I’d kept him there waiting for a long time.” (Midwinter claims that she answered the door in a timely fashion when the driver arrived.)

Despite the delivery driver’s attitude, however, Midwinter was happy with her order — until she claims she received a WhatsApp message from a number she didn’t know. Excerpts of the alleged exchange can be seen in the screenshot Midwinter tweeted (above, left). After responding to the initial message, which just read (sic) “Hy,” Midwinter claims she learned that it was the driver who had delivered her Just Eat order. She claims the texts continued, too — and that they were, by any measure, inappropriate. “At first, I was shocked at the fact someone could approach me in that way,” she wrote in her statement, “but that turned to feeling very uncomfortable as I realized this guy had my name, address, and phone number.”

Says a Just Eat spokesperson in a statement provided to Bustle:

“The safety and wellbeing of our customers is extremely important to us and we were deeply concerned to hear about this incident. Whilst the restaurants on our platform are independent from the Just Eat business, we hold ourselves to high standards and in line with these, we would expect all drivers associated with our restaurant partners to act responsibly and respectfully at all times.

“This driver has acted in a way that does not represent Just Eat and our core values. We are investigating this with our restaurant partner and are also speaking to this customer offline and if the customer decides this is a criminal matter and reports it to the police, we will of course assist the police with any investigation.”

Additionally, a spokesperson for the ICO released a statement about the incident on Twitter:

Midwinter took to Facebook to vent about the alleged incident; however, after so many people responded with messages about how creepy and unacceptable the driver’s alleged behavior was, she reached out to Just Eat about it. She approached Just Eat, rather than the restaurant itself, because she was worried about possible “repercussions” and concerned for her own safety. Wrote Midwinter:

“I did not want them to find out who made the complaint — after all my privacy had already been breached by them and how was I to know they would not tell the driver it was me who filed the complaint? This guy has my name, address, and phone number and if he ended up getting fired over this, who knows what he would do with my information as he clearly had no qualms overusing it in the first place.”

But Midwinter found Just Eat’s alleged response to her complaint, which can be seen in her tweeted screenshot (below, right), unsatisfactory. “I was extremely disappointed with the initial response made by Just Eat,” she wrote in her statement. “At first I was advised to leave the restaurant a review and then I was offered £5 for the ‘inconvenience.’ When I said that was insulting, they offered me £10.”

Midwinter took her story to Twitter — and from there, it went viral. And now, action is being taken on all fronts. “We are appalled by the way this was handled when the customer initially made contact with our customer care team,” a spokesperson for Just Eat tells Bustle in a statement. “This lacked empathy and does not reflect our policies or the way Just Eat would expect something like this to be dealt with.”

Just Eat spokesperson tells Bustle, “We have established procedures for dealing with customer complaints including escalations and compliance teams who will step in if an issue is not resolved satisfactorily on first contact” — and, indeed, Midwinter noted in her statement, “Just Eat contacted me again and have assured me they are looking into this and taking action.” Says a Just Eat spokesperson, “We are looking at our procedures to understand why incorrect and inappropriate information was given out to the customer on this occasion. We have highlighted this with our Customer Care Senior Management team, who will review the incident, and ensure appropriate action is taken to ensure this doesn't happen again.”

It is absolutely unacceptable for anyone who acquires a person’s contact information for a business-related purpose to then turn around and use it for any other reason — and yet, some still seem to think that it’s just fine to do so. (It’s not fine. It’s harassment.) It is also absolutely necessary that when people report incidents, they be taken seriously right from the beginning — and yet, it often takes a huge amount of amplification before any kind of action is actually taken. (This is also not fine. It’s why people don’t report harassment more often.)

It’s encouraging that both the incident Midwinter allegedly experienced with the driver and the customer care response to her report about it are now being dealt with by both Just Eat and the ICO; however, the way the whole situation allegedly unfolded also shows how far we still have to go as a society. Midwinter ended her statement with a series of questions, the last one being this: “How in today’s world can we still be looking at this type of behavior?” Because the bottom line is that we shouldn’t still be looking at it.

But hopefully — now, during this Era of Reckoning — this will change.

And what a welcome change it will be.