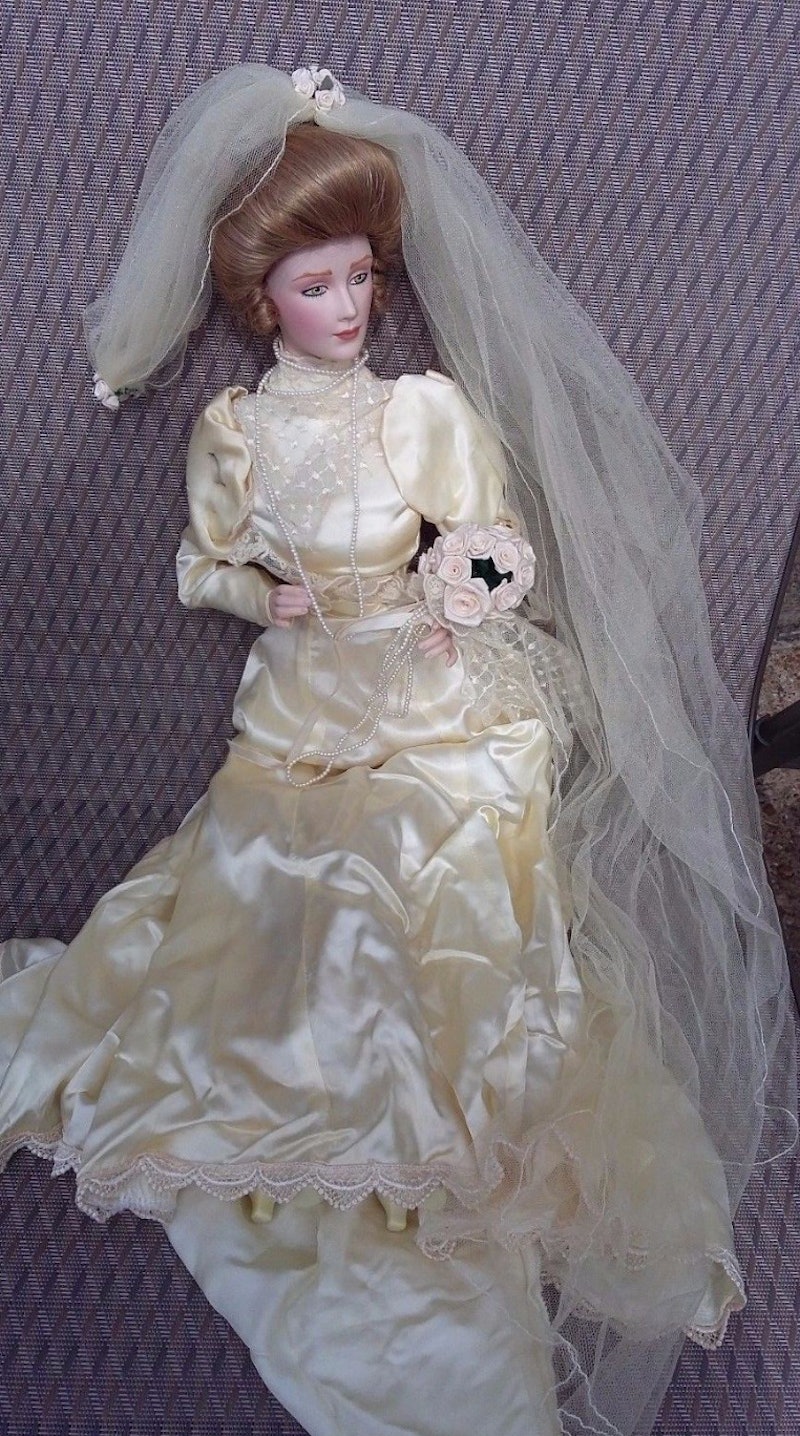 In case you wanted something aside from the ghoulish political climate to keep you up tonight, a woman is trying to sell a “haunted doll” that’s creeping out her family. It’s a well-known fact that porcelain dolls are very haunted. Yes, all of them. Every single one. Anyone who’s ever seen a porcelain doll in real life will attest to this. But apparently Debbie Merrick, the aforementioned woman, didn’t take that into account when she purchased three china dolls from a second-hand shop. While the dolls cost about $6.50 in U.S. dollars, their emotional cost seems to have far exceeded any humanly acceptable amount.

That’s because Merrick believes one of the dolls is haunted. As reported by The Sun, Merrick claims the haunted doll has set off smoke alarms in the middle of the night, moved around by itself, and even scratched her husband’s legs while he was sleeping. Rather than tossing the doll or trying to discard it in a different way — you know, standard scary movie doll removal protocol —Merrick is selling the haunted doll on eBay.

How much will the haunted doll run you? Aside from the emotional trauma and maybe some tiny, doll hand-sized scratches, right now the highest bid is £410.00 ($534.05 in U.S. dollars). Maybe some of that profit can be used to buy sage or holy water or perhaps a new house. The listing states the doll is made by Franklin Mint, is in good condition, and that it’s “a pretty doll… but very creepy just something about it.”

Oh, did I not mention that the doll is in a wedding dress? Porcelain dolls in wedding dresses are arguably the most haunted of all the haunted dolls. This Demon Bride Barbie even comes with all the accoutrements of matrimony: a veil, a floral bouquet, a pearl necklace, a dead-eyed stare meant to drain the life of all who dare look her in the eye, cute shoes. That hairstyle is also just ... a lot. Like, we get it. You’re haunted. No need to rub it in our faces with such an obviously spooky, Victorian-style up-do. There were no Bump-Its in the 19th century. We all know that it's spooky, ghost power that’s holding that bouffant in place.

You don’t need to look far to find stories about creepy haunted dolls. This makes sense given the very scientific fact that dolls are creepy AF and are all undeniably haunted. What doesn’t make much sense, at least to us, is how big of a market there is for buying and selling haunted dolls. There are even guides on eBay like “What To Expect From Your Haunted Doll,” which advises buyers not to buy dolls that have a super high starting bid. “Most individuals who are selling real paranormal items will want to get rid of it quickly and will list it for a reasonable price,” the author and self-described collector of paranormal items writes. Makes sense given their very HAUNTED AND SPOOKY NATURE.

Merrick’s doll at least abides by that rule. (Less than an hour ago, the highest bid for the doll was about £132. Now, it’s more than triple that amount.) You’ve got about 22 hours left if you still want to bid on the haunted doll. Pretty sure that's about all you've got left if you've read all of this and are still like, “Yes, please, one haunted murder doll for me, thanks.”

More like this
Behind The Hilarity Of The "POV: You Walk Into My Room" TikTok Trend
By Lexi Inks
TikTok's Butter Board Might Be The New Cheese Plate
By Emma Carey
8 Completely Unserious Tips To Make Your Cuffing Season A Success
By Ginny Hogan
Why TikTok Is Flooded With Controversial Videos About "Pick Me Girls"
By Courtney Young
Get Even More From Bustle — Sign Up For The Newsletter