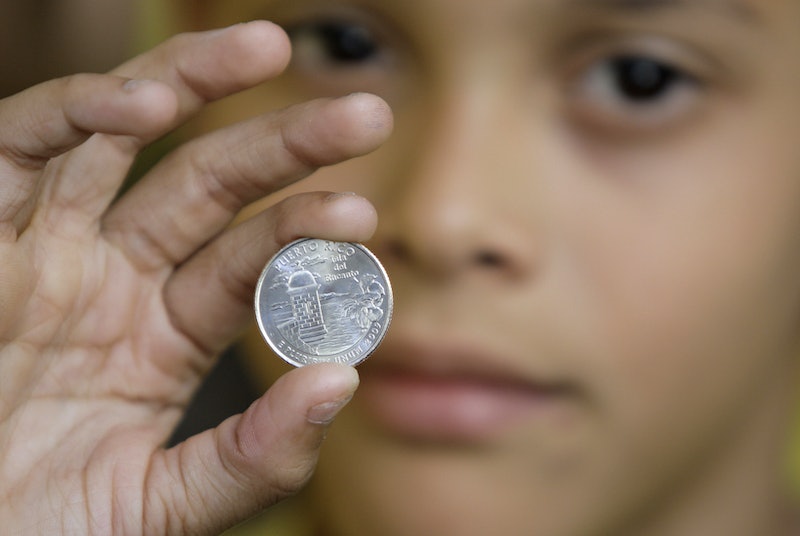 The reverse side of your favorite coin may get a feminist revamp if these lawmakers have their way. Two representatives introduced a bill that would put influential historical U.S. women on the quarter, and though the process to have the quarters minted is still not settled, in a few years, you could be spending them.

The project, according to the bill introducing it, would honor the 19th Amendment, which gave women the right to vote, and it would work a lot like the state quarter collection. Those quarters featured George Washington on one side and a unique design on the back that represented each particular state. With this women on the quarter project, each of the 50 states, five territories, and Washington, D.C. would also get their own version with a woman who was prominent in the state or territory's history on the back.

The first designs could be ready in 2020, the 100th anniversary of women's suffrage, but the coins wouldn't be in circulation until 2021. And that's if the bill moves through the Republican-controlled Congress and is signed by President Trump.

Democrat Barbara Lee of California and Republican Bruce Poliquin of Maine introduced the bill together last week, in the heart of Women's History Month. The first step to making the quarters would be passing the measure. The bill has been introduced but has not been discussed in committee.

Once the bill is passed, it would direct the U.S. Treasury to implement the production of the coins. They in turn would contact the governor or top official in each state and territory to choose the 56 featured woman. According to the bill, the governors are supposed to check with women's organizations from the states to help decide who to honor. No living women are eligible.

Rep. Lee, the congresswoman responsible for the bill, explained her inspiration to CNNMoney:

We have so many women, first of all, who are unsung heroes, and their accomplishments haven't been recognized. This bill, and hopefully the coins, will give us a chance to really highlight them and make sure the world really knows who they are and what they have done. I think it's really long overdue.

Former Treasury Secretary Rosie Rios worked with Lee to draft the bill. She's the woman behind the plan to add Harriet Tubman to paper money. When Obama left office, Tubman was set to be put on the $20 bill, but it's unclear whether or not Trump's new Treasury Secretary Steve Mnuchin will go along with the plan. The Treasury has said it continues working toward that goal, but Mnuchin could halt production of the new bill before it debuts in 2026.

Rios didn't announce a similar plan to put women on coins, because that is something the Treasury cannot do on its own. While paper money designs are up to the department, coins are only able to be changed with input from Congress, thanks to the laws that control how the country's currency designs are decided. Only another law can alter the design of coins.

That's why Rios looped in Lee to make it happen. Her goal was to honor women's suffrage, but she needed Congress to work on the coins. "I had a whole plan," Rios told CNNMoney. "It wasn't just a woman for the sake of a woman. I knew our timeline [for issuing updated coins and currency] was 2020, the suffrage centennial. This is about giving half your population the chance to participate."

As for the likelihood of passing a pro-women bill in the current Congress, Lee's Republican co-sponsor feels positive. "I think we're going to have plenty of support," Poliquin told CNNMoney. "It's about women in our society and our country and economy."

While it's too early for states to start the competition for potential honorees, the fact that 56 U.S. women could be commemorated is significant. Women have long been underrepresented on both bills and coins. In the 20th century, only Susan B. Anthony and Sacagawea were featured.

Interestingly, the only other woman on modern U.S. currency actually is thanks to the state quarter designs, the program that the women quarters are designed after. Helen Keller, who born and raised in Alabama, was featured on her state's version. Maybe they'll honor her again this time around — if the bill passes.