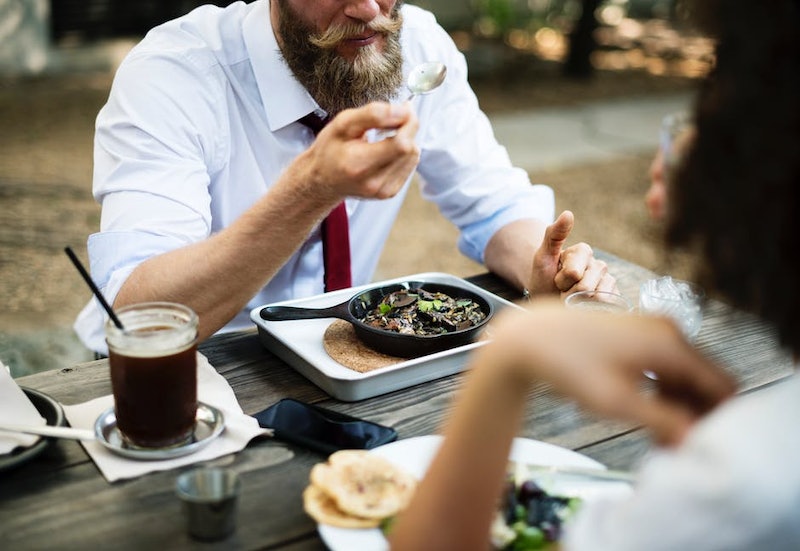 Modern love is a tricky business. After the 2016 election, it simply isn't enough to meet someone smart, attractive, and willing to pretend to be interested in your Beanie Babies collection. It's also important that they fall somewhere on your end of the political spectrum. Otherwise, you might end up walking out of a date with a Trump supporter, just like an anonymous Philly woman did earlier this year.

Back in the day, i.e., anytime prior to the 2016 election, maybe it wasn't a big deal for couples to cross the ideological divide. American politics have always been divisive; political parties form in the first place because they have differences of opinion. But in the 21st century, the gap between Republicans and Democrats has widened to a gulf. According to a 2014 survey by the Pew Research Center, the two major American political parties have grown "further apart ideologically than at any point in recent history" — and that was before Trump won the presidency. In an era of travel bans and fake news, agreeing to disagree requires a whole new level of compromise. Some people may not find it worth compromising at all.

Case in point: The aforementioned woman who peaced out in the middle of a date when she realized she was with someone who voted for Trump last year. In early November, Bryan Leib, treasurer of the Philadelphia Young Republicans, told Philadelphia newspaper The Inquirer that he had connected with the woman on a dating app. They met for drinks at a nice restaurant in the city center, and Leib thought things were going well. After a few hours, though, the conversation turned to politics. When Leib revealed he had voted for Trump, the date took an abrupt nosedive as his date jumped ship faster than moderate Republicans after the latest diplomatic disaster.

Speaking to the Inquirer, Leib explained:

"She stopped in her tracks and said, 'You know what, Bryan? This has been a lot of fun, but I think we’re two completely different people.' ... And she literally got up and left."

And so Leib watched what could have been his lifelong companion, or at least someone cool to hang out with sometimes, walk straight out of his life, never to be seen again — all because he voted for a xenophobic, sexist businessman who publicly trades schoolyard insults with foreign heads of state.

Leib's unnamed date isn't the only person to add a Trump-related clause to their dating profile. Whether they voted for or against the current president, numerous publications have reported that people are making a point of choosing dates with similar political ideologies. One staunch conservative even created a website, TrumpSingles.com, for Trump supporters to meet each other and "make dating great again." You may now take this time to cast your gaze to the heavens in a plea for patience with the world.

As problematic as the ramifications of polarization are, it does make sense that people are choosing to stick to their own political parties. If someone's political rant on Facebook is irritating enough to unfriend them, imagine having to listen to those rants coming from your significant other.

Then there's the fact that political ideologies usually reflect personal values. As one woman explained to NPR in February, "If you don't care about a person who says you can grab women by the pussy and that's OK — I don't wanna date you if you think that behavior's OK."

Clearly, our unnamed Philly woman isn't alone in her distaste for dating Trump supporters — and the reverse is also true. When it comes to politics, love isn't so blind after all.