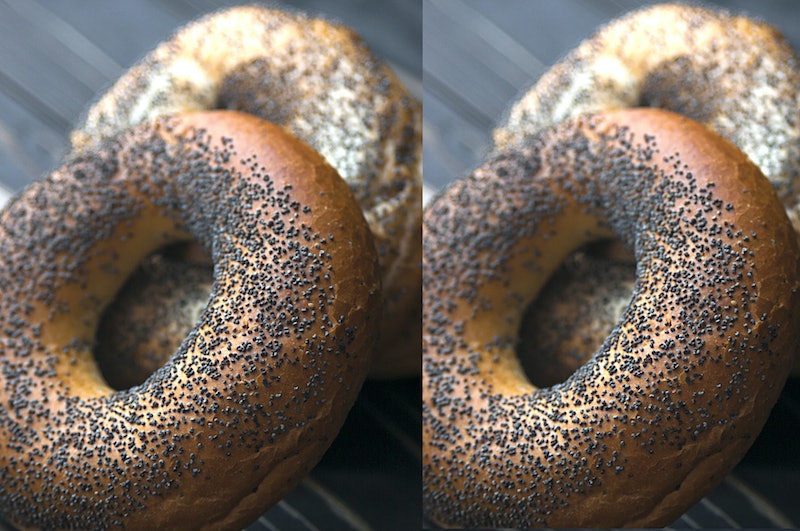 Though it may sound like a myth you hear in health class, eating a poppy seeds actually can lead to a false positive on a drug test. A Maryland woman was giving birth to her daughter in April, 2018, when she tested positive for opiates after eating a poppy seed bagel. According to TIME, the woman, Elizabeth Eden, told WBAL TV 11 that during her labor, her doctor claimed that she’d tested positive for opiates. Eden was allegedly denied a request for a second drug test, and was reported to the state while her baby daughter stayed in the hospital for five days. Eden described the experience to WBAL as “traumatizing.” Her assigned case worker subsequently closed the case, telling WBAL that it was “a legitimate case of the poppy seed defense.”

But how exactly do poppy seeds lead to false positive drug test results? According to LiveScience, poppy seeds are derived from the opium poppy, which produces a milky fluid from which opiates like opium, codeine, heroin, and morphine are made. Poppy seeds, which are widely used in delicious baked goods like bagels, pastries, and muffins, can contain traces of morphine, enough to show up on especially sensitive drug tests and render positive results. TIME notes that while poppy seeds themselves don’t actually contain any morphine, they can become tainted with morphine during the harvesting process. And while these trace amounts aren’t enough to get you high, they can throw off a drug test.

The Washington Post reports that, however strange it may sound, studies show that poppy seeds can indeed interfere with highly sensitive drug testing. In a similar case in 2010, the American Civil Liberties Union of Pennsylvania filed a lawsuit on behalf of a woman whose three-day-old daughter was taken from her after she ate a poppy seed bagel and failed a drug test, the Post reported. A similar lawsuit was filed in the same Pennsylvania county after a woman’s son spent 75 days in foster care when she failed a drug test after eating pasta salad with poppy seed dressing, according to TIME.

The Washington Post further reports that, given that eating poppy seeds can wreak havoc on drug tests, the federal government revised its policies for workplace drug testing twenty years ago. The testing was devised to detect opiate amounts that indicate drug use, but exclude trace amounts that result from either dietary exposure, or from milder prescription medications like codeine. These new testing limits mean that eating poppy seeds won’t cause a drug test failure.

But some hospitals still use lower limit drug testing for pregnant women and new mothers — meaning that you could eat a poppy seed bagel before giving birth, and test positive for drugs at the hospital. Some hospitals claim that more sensitive tests are needed in these cases as some addicted drug users would test negative otherwise. And The Washington Post also notes that not all workplace human resources departments follow the revised drug testing guidelines set by the federal government.

TIME notes that since eating poppy seeds before a drug screening might lead to a potential false positive, it's probably best to avoid them if you know you’ll be taking a drug test within the next few days. TIME further reports that the U.S. Anti-Doping Agency also recommends poppy seed avoidance pre-drug test for athletes and others subjected to screenings. Though no one wants to avoid a lemon-poppy seed muffin, you might be better off with blueberry, at least for a little bit.